Last June (2018) I found myself in London for work. When you fly to the UK from the States, and don’t stay a Saturday, it can be pricey. Sometimes I’ll fly in early on a Saturday, but I was just coming off another work flight from NYC and had to stop back home in Raleigh first (yeah, my husband likes to see me now and then). My company has a policy that if staying a weekend is less expensive, they’ll pay for it. Quite often the flights, hotels, and even airport taxis can be cheaper depending on the day of the week you travel and therefore it is important to keep this in mind if you travel to and from the UK frequently. Anyway, this is how I found myself in Brighton Beach for the weekend. I have a friend back in America who loves her weekend trips away with family and friends, she recently told me about how she looked at log cabins for sale and got one! It’s like a home away from home in the wilderness, it’s all made up ready for her and anyone who wants to come along too. I’ve seen the pictures and I’m pretty sure you could live there forever, it is stunning and I think it was a great idea. She’s invited me around when I get back and I can’t wait to see it, I’m sure once I’ve seen it I’ll want to start looking into purchasing one of these prefab cabins for myself as a peaceful hideaway!

How to Get to Brighton

Getting to Brighton from London is very easy. We chose to hop on the Gatwick Express from the Underground Victoria Station, then hopped on the Southern Railway at Gatwick (just buying at ticket at the stall – though you save 10% if you buy online). All in all the trip took about 90 minutes each way. When arriving in London, the train station is a little bit of a walk to where we were staying, so we grabbed an Uber and headed to our hotel. On our way back, we just took the Southern Railway to Gatwick and then an Uber to Heathrow (it was the fastest route). When visiting London or any part of the UK, trains and railways are one of the best transport options that you can rely on. The railways are normally operating well as the UK seems to have a lot of railway companies that perform regular maintenance on the railways to make sure that the trains can continue to operate for the majority of the year. The rail industry has access to railway news across the UK, so companies can keep up to date with any railway issues or problems that need fixing right away. This also helps smaller railway companies to get more work. Due to that, the railway networks in the UK are pretty good.

Alternatively, depending where you’re going, National Express runs coaches (buses) between Brighton and the airports. And if you have time and money, you could Uber or drive… but who wants to do that?

We booked the Brighton Harbor Hotel and Spa since it was under $200 USD per night and within policy. Usually we’re Hilton people (points!), but the Hilton in Brighton was pricey this weekend. I loved our little hotel rooms. We booked the inexpensive “Cozy Cabin Suites,” which literally looked like a boat cabin. The hotel is nautical themed and had an amazing spa in the basement.

The hotel was also across the street from the beach, and just a 10 minute walk to the Lanes, the Pier, the West Pier, and British Airways i360. 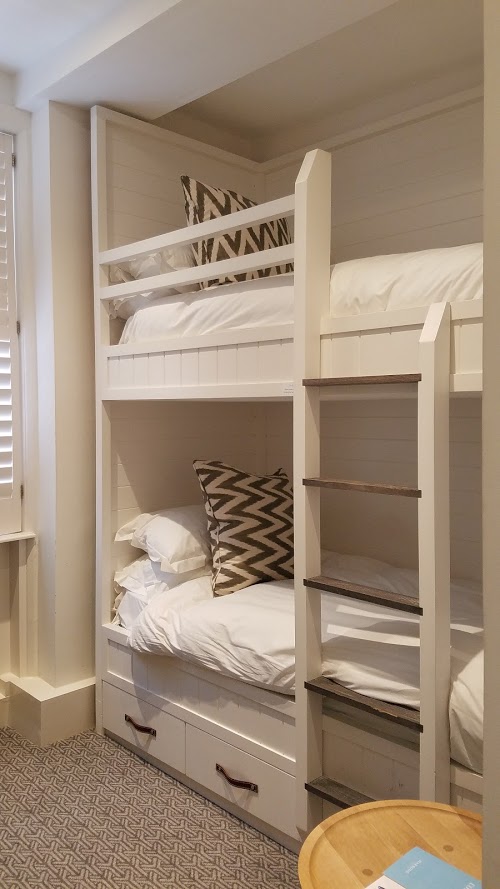 Downstairs the full service spa had a large cool pool, a warmer pool with jets, two cedar plank hot tubs, a steam room, a sauna, and plenty of little nooks to relax. The spa also had a weight and cardio room. We spent a lot of time in the pools, which were perfect after a relaxing day.

Here’s a tour of the hotel room ad spa. Seriously, how cute is this room?

Food and Drinks in Brighton

Our first night into Brighton, we wanted to eat a traditional fish and chips meal. We heard Melrose was known as the number one fish shop in the area, so of course we had to find out for ourselves. Well, they were not wrong. The portions are huge and the fish was light, flaky, and delicious. I had the haddock and @tiffj_travels (follow her on Instagram!) chose the cod. We also started with oysters and litre of wine (of course). The prices were decent, with the haddock and cod running about ?7.50. 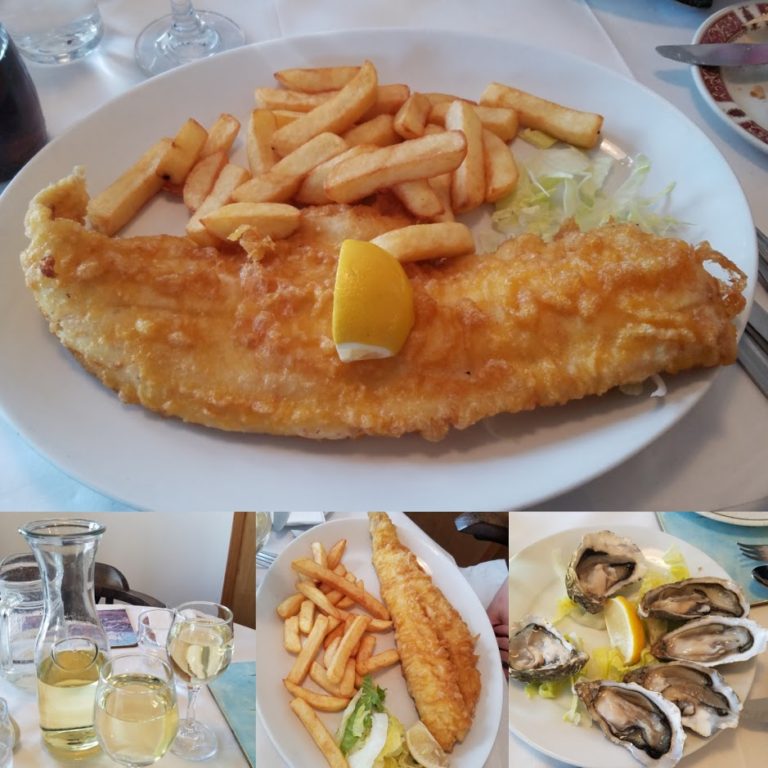 The next morning for breakfast, we walked towards the lanes and found a random cafe called “Coho Cafe.” Coho has three locations in Brighton, and we ate at the Ship street location.

Coho Cafe is known for its award winning espresso. My Americano was amazing and kept me going all day, so I think they are on to something. I also got toast with egg and lox. It was a great breakfast and exactly what I needed to start the day. 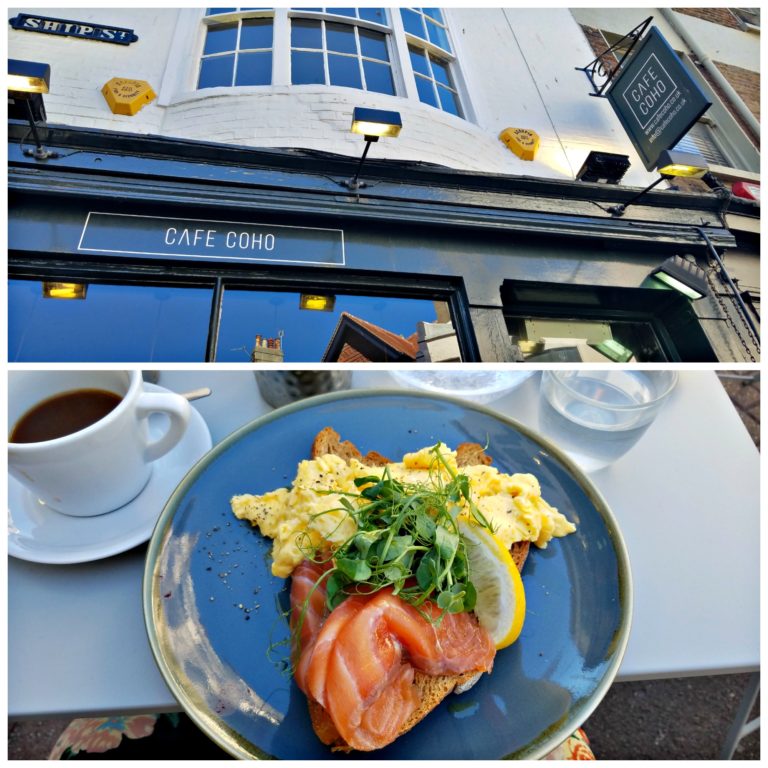 After walking about the Lanes, we headed back to our hotel’s restaurant, The Jetty, for high tea. The Jetty’s high tea was traditional with finger sandwiches, scones, desserts, and biscuits. It also features Tea Pigs tea bags (not loose tea). The photos show tea in the front room overlooking the sea, but our tea was in the backroom near the fireplace. Had we known, we may have made a note to ask to move to the front room. Minus that set back, it was a tasty and relaxing afternoon tea at a good price at just ?17.95. 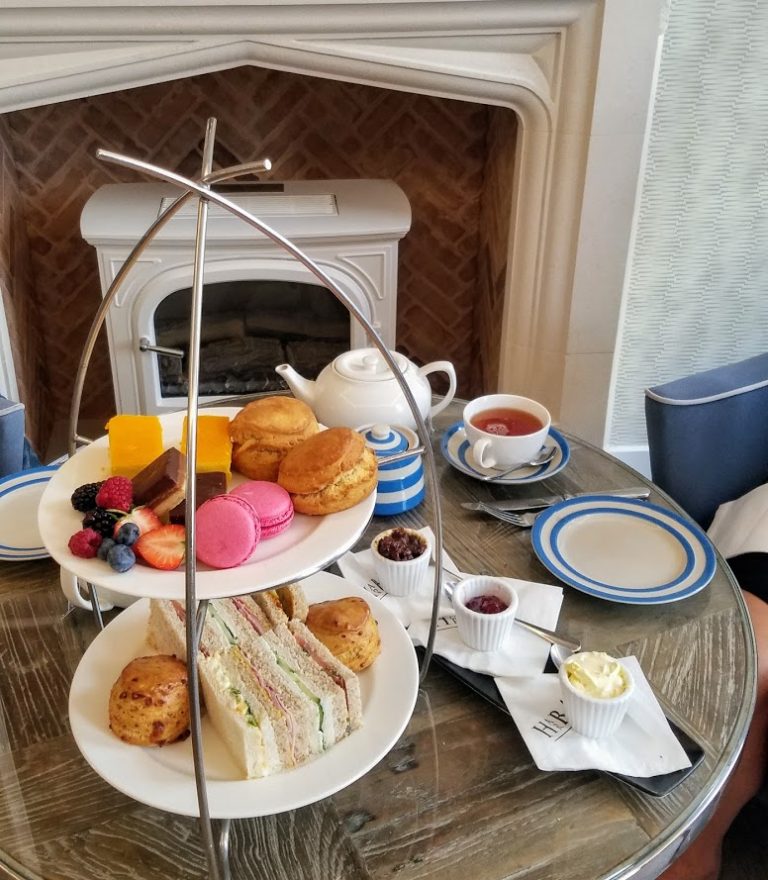 After tea, we popped over to The Greene Room and had a cider on the patio. We actually came to this spot a lot, because the patio was a great place for people watching and the cider was affordable.

It was a beautiful day, so we left the Lanes and headed across the street to the beach. Basically, we followed the music. Every bar/restaurant had music playing, people dancing, bachelorette parties galore, and easy beach eats.

We first tried The Tempest Inn, but one thing to note, if you have American credit cards with chip+signature (no pin) they are not really welcomed at The Tempest. Even our debit cards. So, we moved on. (Though the inside of the Tempest is like a cave and I wish we could have explored it.)

We went next door to Brighton Music Hall for (surprise!) another cider. The Music Hall was fun because it was mid-day, they had a DJ, a bunch of drunky bachelorettes were dancing with a bunch of older people, and it was just a fun vibe.

We walked down the beach a bit to the Hilton Brighton Metropole hotel for a cocktail and a view of the old pier. The cocktails were a bit pricey, but it was fun to sit on the patio and have a great view of the beach, the Brighton West Pier, and the British Airways i360. After that last cocktail, it was time to go back to the hotel for some shut eye.

The next morning we arose early for Bottomless Brunch at The North Laine Brewhouse . The mimosas (or bloodys, or pale ale — depending on your choice) run from 11:00 a.m. to 2:00 p.m., and it’s suggested you arrive early. And, if you ask nicely, they’ll go easy on the juice.

The brunch had a few options, and I went with typical English breakfast (minus the mushrooms, of course).

What makes North Laine even more fun – is bottomless brunch comes with drag queen entertainment! On the day we went, it was bingo, but the shows rotate. Apparently, this was the only pic I snapped…

Later that evening, for dinner we hit up Bohemia for dinner. Bohemia is an eclectic spot that serves afternoon tea and dinner, and later converts to a nightclub in the later hours. Reservations are suggested for this restaurant, and we were seated in the loft area, which gave us a view of the people walking by on the street, too.

We started out with fancy cocktails, of course.

Then moved on to an appetizer of pate, and entrees of mussels and kabobs. All were really good and, while a lot of places in the UK skimp on seasoning, this was not the case at Bohemian.

Because we’re sticking to food in this section… I’ll skip the part where we walked the pier and watched the sunset at the beach. But we weren’t ready to go home yet. Instead, we headed to INSERT WINE BAR to enjoy a bottle of wine, cheese, and fresh sliced jamon.

Lastly, what food post would be complete without mentioning room service. The room service at our hotel was limited, but both a cucumber and cream cheese and a salmon and cream cheese sandwich were available 24 hours per day. Both were actually awesome, and a perfect fix for a late night snack after drinking cocktails.

What to do in Brighton Beach

Brighton Beach has a lot going on. It’s a tourist town, it’s a quick excursion from London, and — it’s a beach town.