My flight was super delayed (like three hours) and it was one of those flights where I actually fell asleep while we were still on the ground (for two hours) and woke up in the air. I had no clue that it had been two hours, and was really confused as to why we weren’t halfway there. Also, our pilot said something funny like – if it seems hot on the plane, it’s the steam coming from my ears due to how annoyed I am that we’re running so late.

My dad picked me up and dropped me off to get a car from my mom’s house. I said hello, and then headed to the hotel because it was late. Usually, I stay at my mom’s house, but there was a full house this trip, my friend Laura was coming in, and I had Marriott free stays that were going to expire.

I arrived at the Fairfield that was near my parent’s place. It looks like it has been remodeled recently, and for the price and location, it was perfect. I essentially passed out (while watching Forensic Files) when I got there; it’s been a long month.

The next day I woke up and met up with sister and dad for lunch. We headed to Basement Burger Bar, which is this awesome little make your own burger and salad place in Downtown Farmington. It is more restaurant during the day, with a mix of high tops, low tops, and a few bar spots. However, at night, it turns into a fun nightlife spot (spoiler alert, we go here a lot this week) and has over 40 craft beers available.

Basically, you get a menu and a dry erase maker, choose your burger and toppings, and what not, then you turn in your menu. My creation was a bison burger, with Swiss cheese, jalapeno, pineapple and other fixings – all on a pretzel bun. I think I’ve mentioned I love game burgers, and this is no exception, 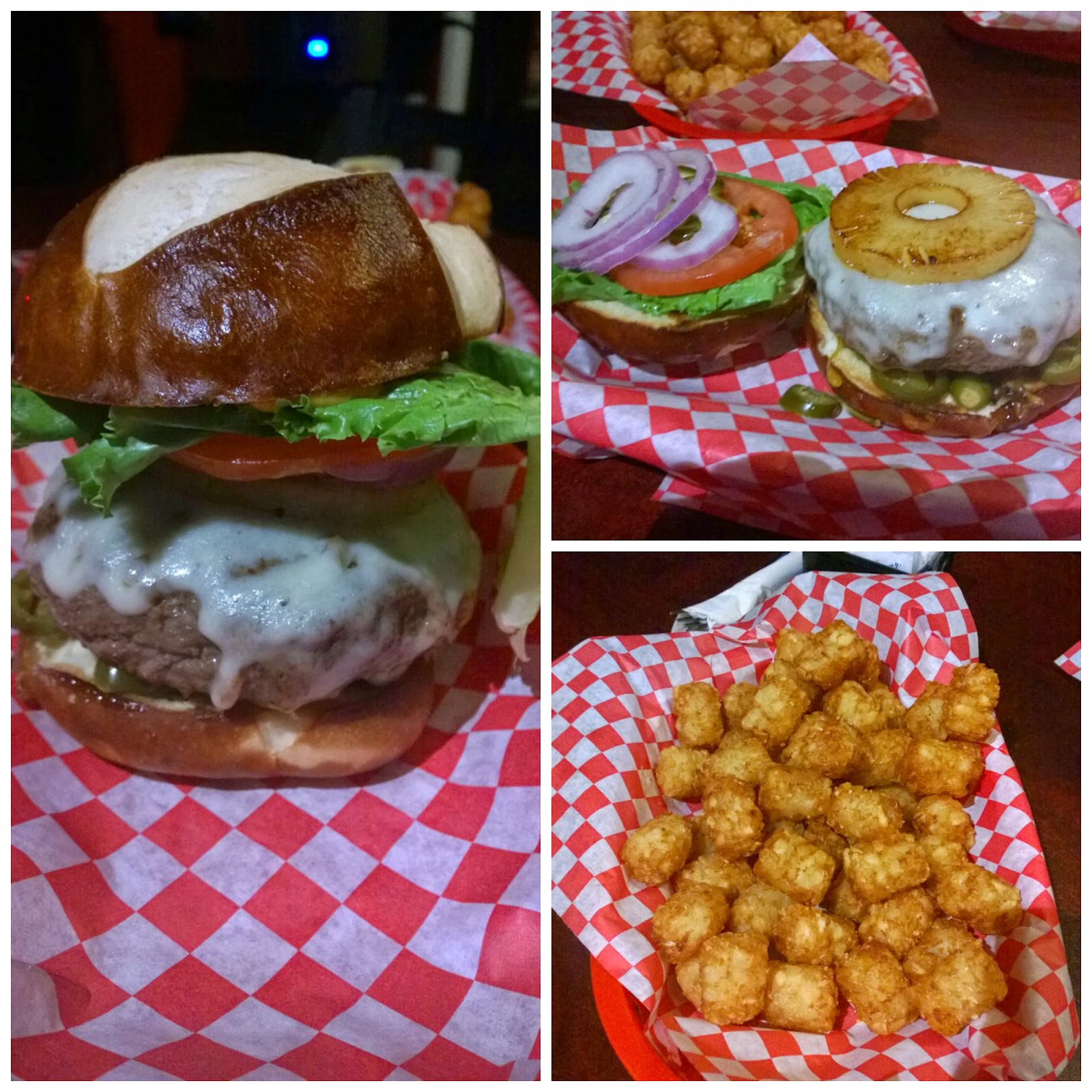 I spent the rest of the day running errands, going to grocery stores to prep for Thanksgiving dinner (including brining two turkeys), and spending time with my family and working a little bit. I hung out at my mom’s house creating Thanksgiving side dishes like cranberry sauce and prepping everything else for tomorrow’s day of cooking.
The next morning, I woke up really early to get Laura from the airport – as she took the red eye. We went back to the hotel, grabbed a little free breakfast, then went back to bed for like six hours. After we woke up, I took Laura to a Detroit staple – Buddy’s Pizza.
OK, you probably know all about New York style pizza, or Chicago style pizza… but did you know there is a Detroit style pizza? It’s my favorite type of pizza (but sure, I’m probably biased).
So what is Detroit style pizza, you ask? Essentially, it’s a square deep dish pizza, cooked in a pan and the marinara is on top of the toppings and cheese. When it cooks, the edges and bottom get really crunchy but the middle stays soft. I think Wikipedia may have a better description. But trust me, when you go to Detroit (and you should!), try Detroit style pizza. 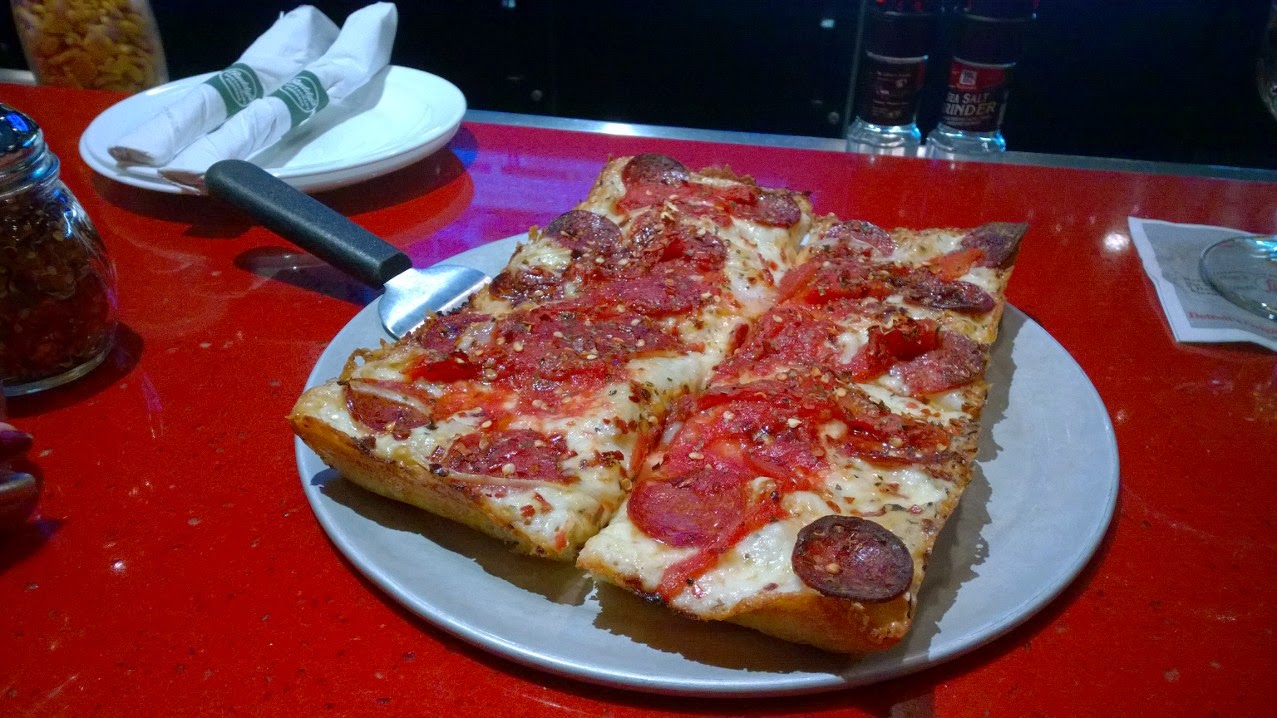 I took Laura to the Buddy’s in Farmington Hills (which used to be one of my high school hangouts), but the original location (from like 1936) is still open on the corner of Six Mile and Conant. It’s a big restaurant and good for parties and big groups. The bar is in a separate front room from the rest of the restaurant, which is great because you can dine without kids in the bar.
Oh besides Pizza, we drank Bell’s Two Hearted Ale. 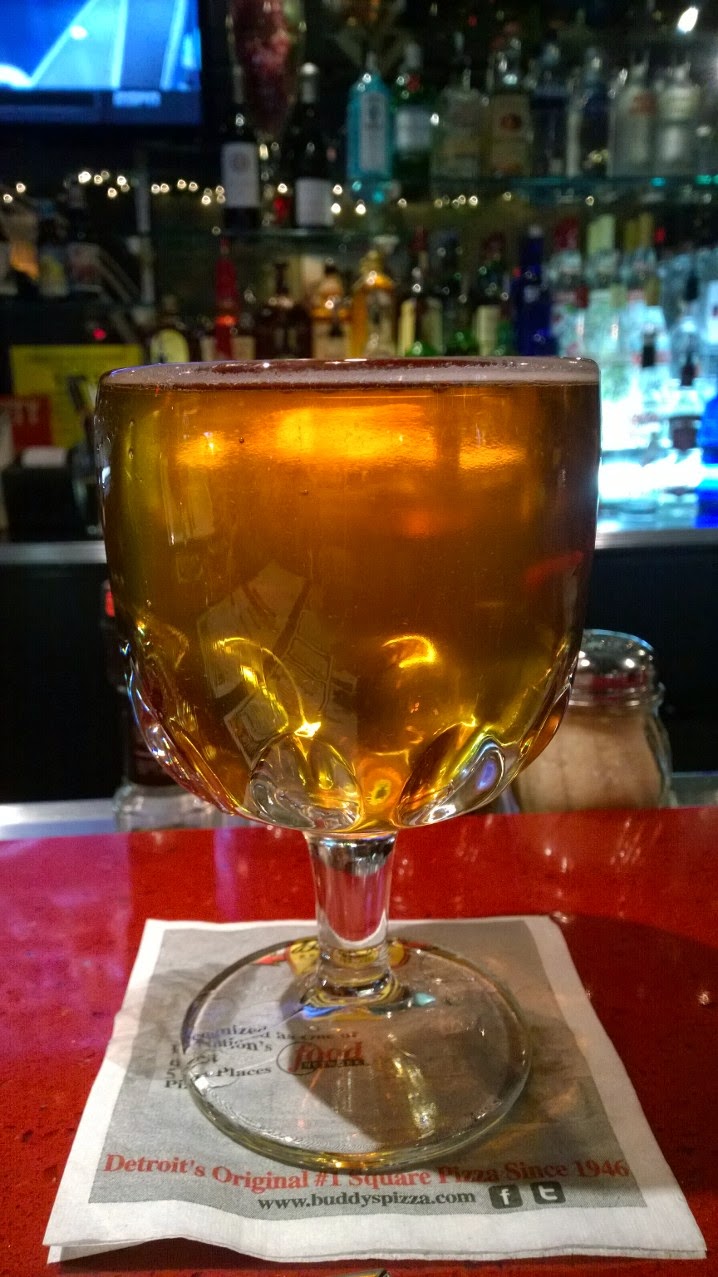 Then it was off to grocery shopping and finding a Detroit Lions shirt for Laura. It’s great to know that Meijer and Kohl’s always have really good prices in the kids department on that type of stuff too, as I guarantee she’ll be wanting a few. And, if you’re really feeling the #OnePride, you can purchase this snazzy wine holder. 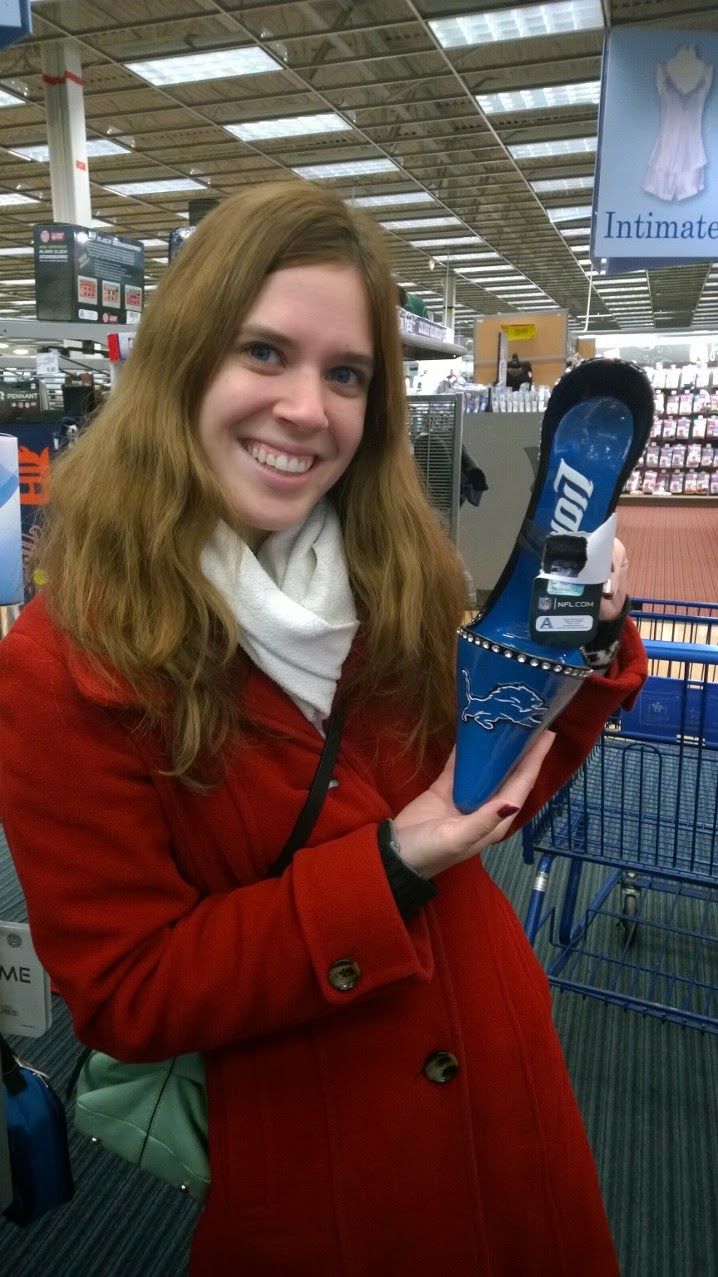 Laura and I went to my mom’s house and prepped the turkeys (and Laura made an apple pie), then headed back to the hotel, where we sipped RumChata (which hasn’t become popular in Seattle yet, but tastes like Cinnamon Toast Crunch), and Crispin Cider and hang out in the hot tub for a bit. We had to get to bed early, and of course we fell asleep to Forensic Files.
The next morning was Thanksgiving – which in Detroit means GAME DAY. We started with breakfast at Leeza’s Cafe in Farmington Hills. It’s a little cafe with booths and a counter, and usually busy. I love this little cafe and we come here for breakfast a lot. I was also very appreciative that Leeza’s was open on Thanksgiving morning.
The menu is extensive, but they have the best tomato soup ever. I always get the grilled cheese, add scrambled eggs, and the tomato soup. Yes, even for breakfast. 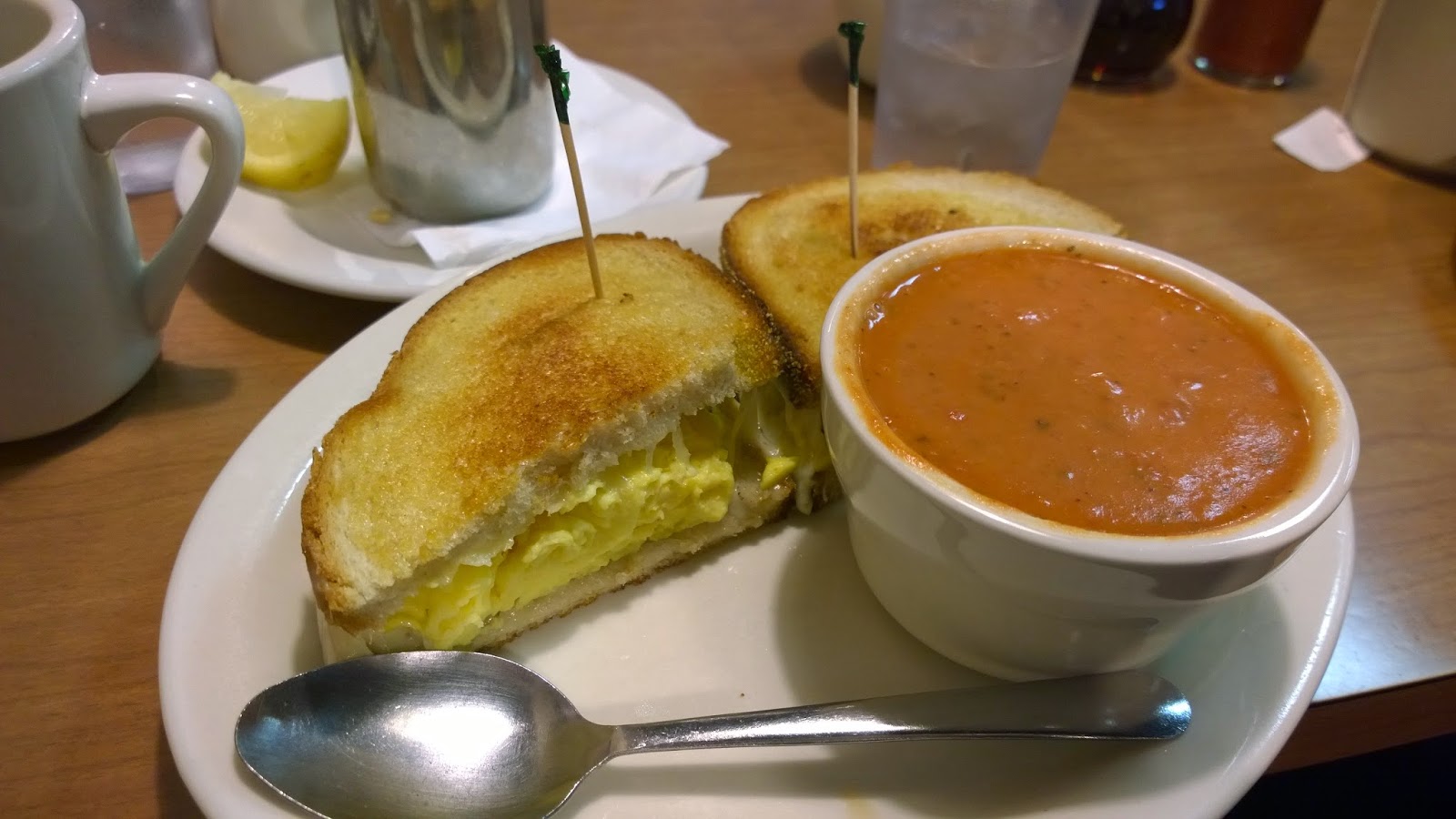 Laura and I went back to the house to make a roadie for the drive downtown. We all piled in the big Infiniti QX80 (which by the way, is an awesome vehicle) and jumped on The Lodge.
The Chicago Bears were visiting my beloved team, the Detroit Lions. The Lions are one of the two teams that play a Thanksgiving game every year, and going to the game has been a long tradition in my family. 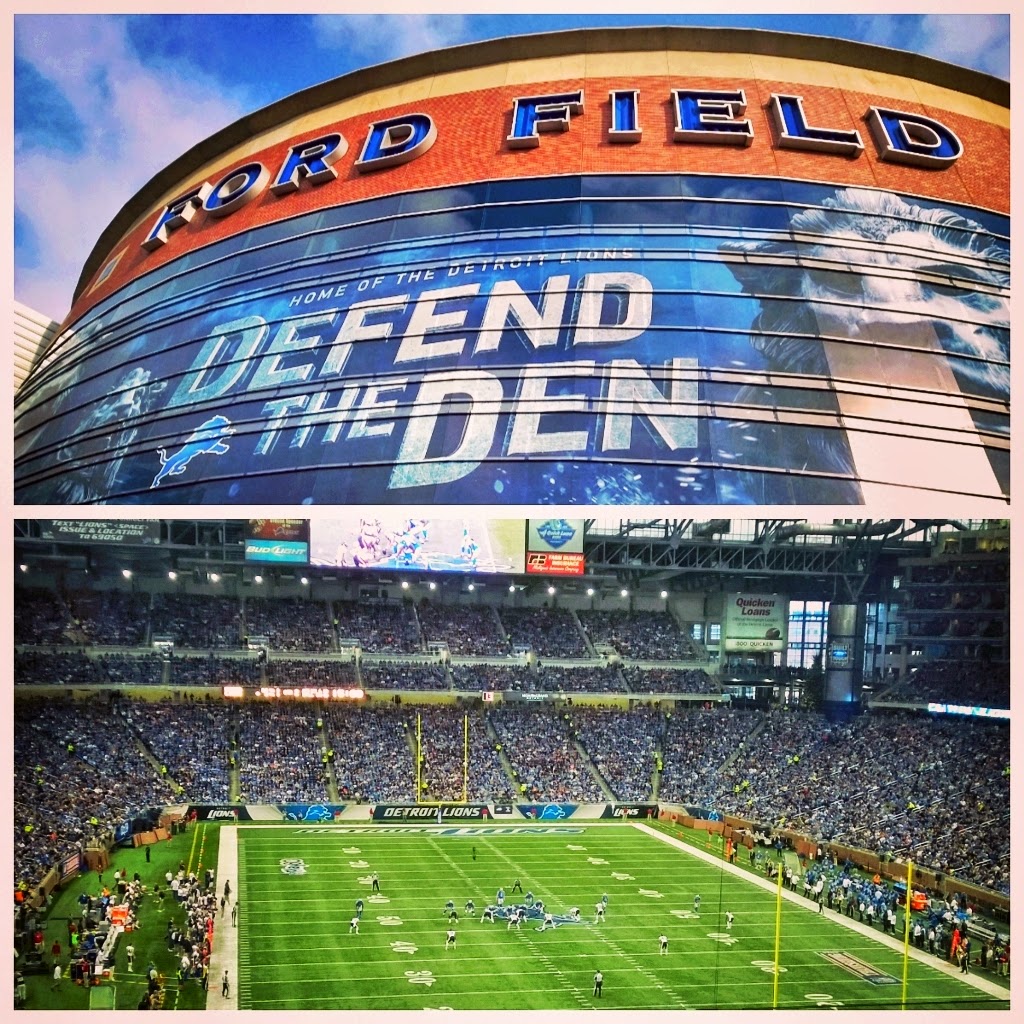 We got to the stadium pretty early to beat the rush, which gave Ashley (my sister), Laura, and I time to walk around the stadium and check things out. I’ve never really done that before. So, that’s how this type of stuff happened. 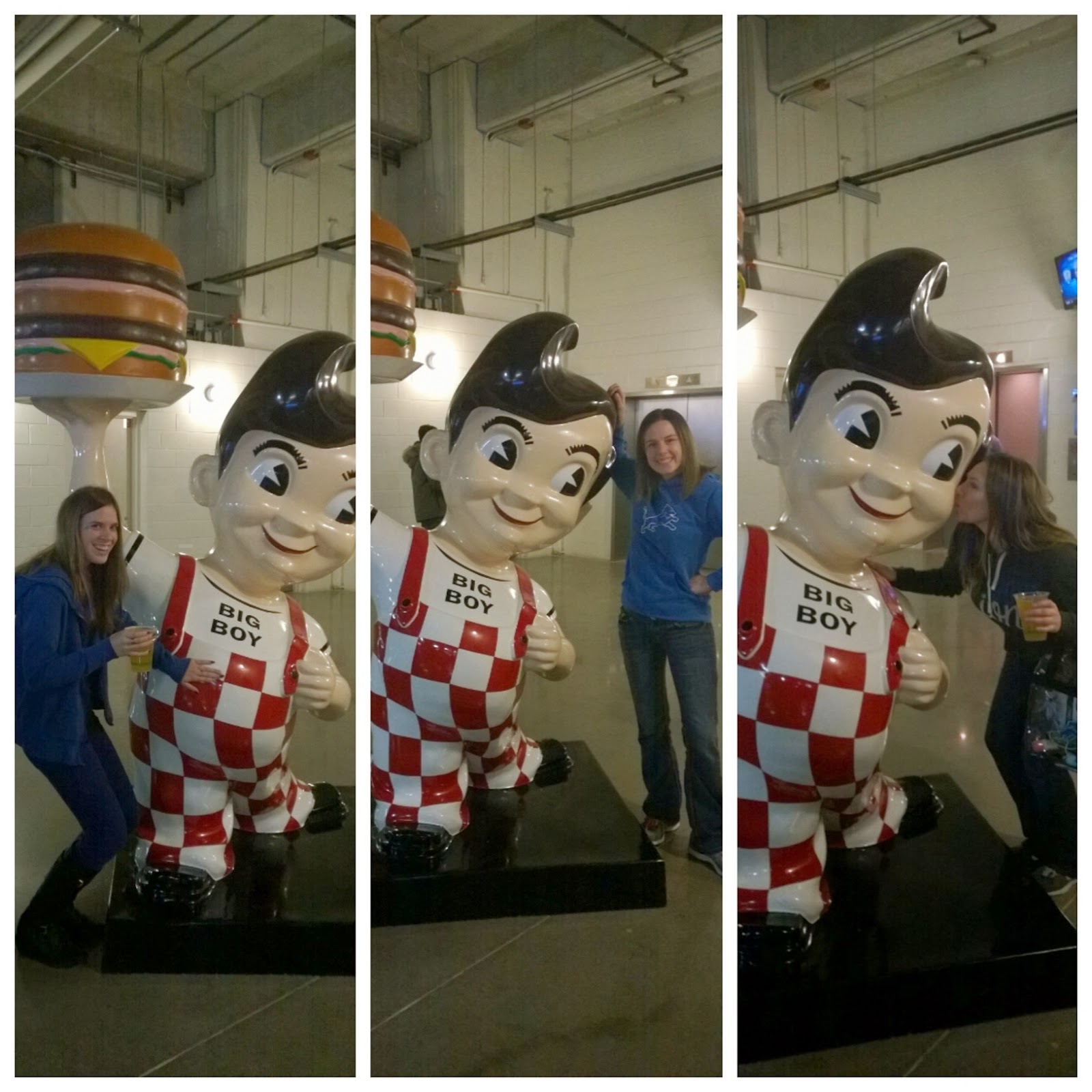 And here’s our family holiday portrait. Ash and I are pretty sure that Laura is my father’s illegitimate daughter (they both have blue eyes), as she kind of looks like she could be a sister. 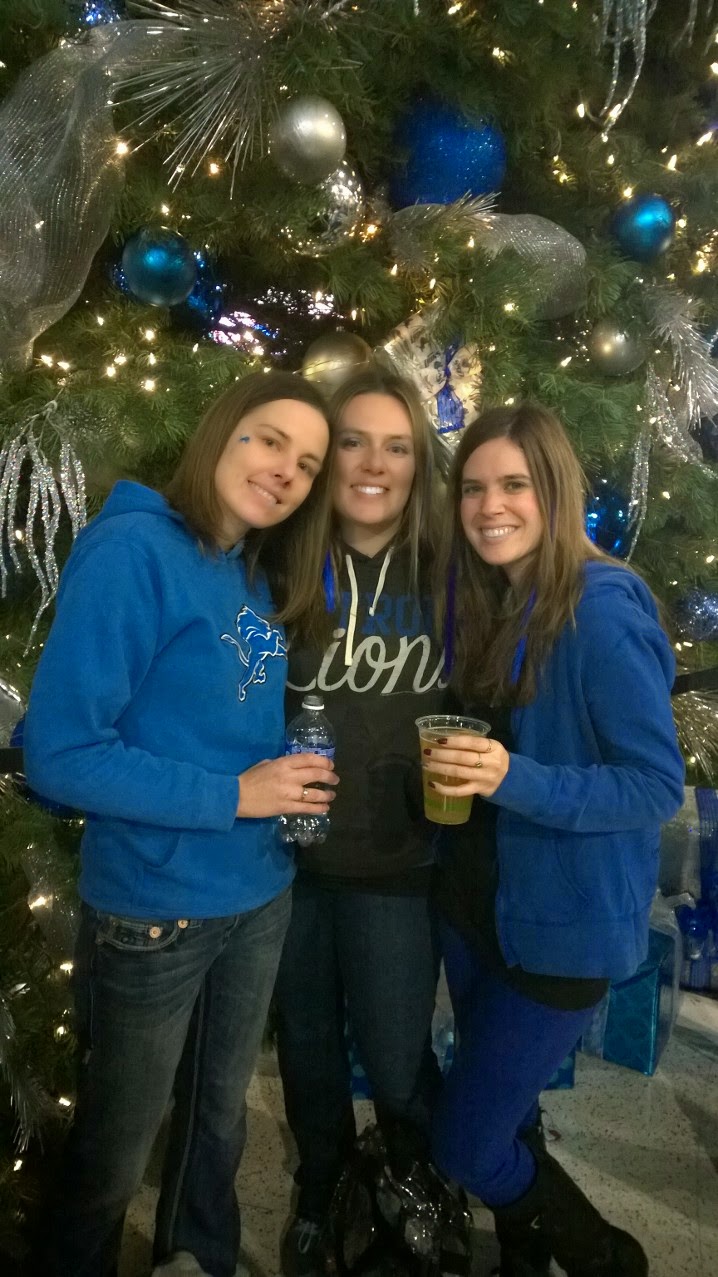 It was a pretty good game, the Lions won 34-17, and that win definitely helped the Lions clinch a playoff spot this season. After the game ended, we followed up with a second tradition – MGM Grand Casino. 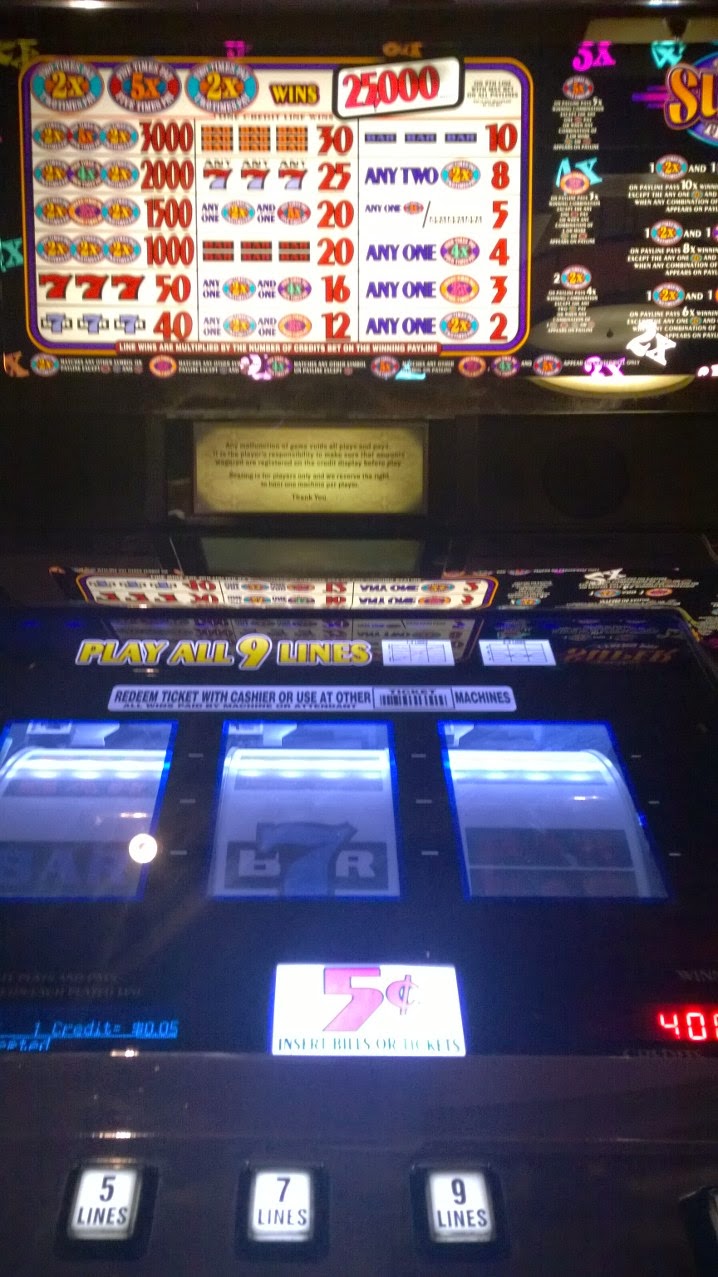 Now I know it may seem funny, but we go here to hang out for a bit to beat the traffic and hang out while the turkeys are still roasting back home. And if we get the chance to win a large amount of money in the process, then it’s time well spent. I have to be honest, this doesn’t happen all to often, but when it does, I definitely make the most of it. In fact, I sometimes decide to continue my winning streak by looking for some reliable pay by mobile casino sites to see if I can try my hand at other games and be successful in the process. And when it gives you the opportunity to pay using your mobile bill, then it makes the experience so much easier to handle. This is definitely a great past time for us.
Finally, after gambling our tiny budgets away, it was time to head back home for dinner. The turkeys cooked all day while we were gone, and due to my brining the birds for two nights, they were super moist and delicious (the butter helped, too). Also, in the very top corner you can see Stuffin Muffins, they are always a crowd pleaser – even with guests that hate stuffing. In the bottom corner, the yummy apple pie courtesy of Laura. 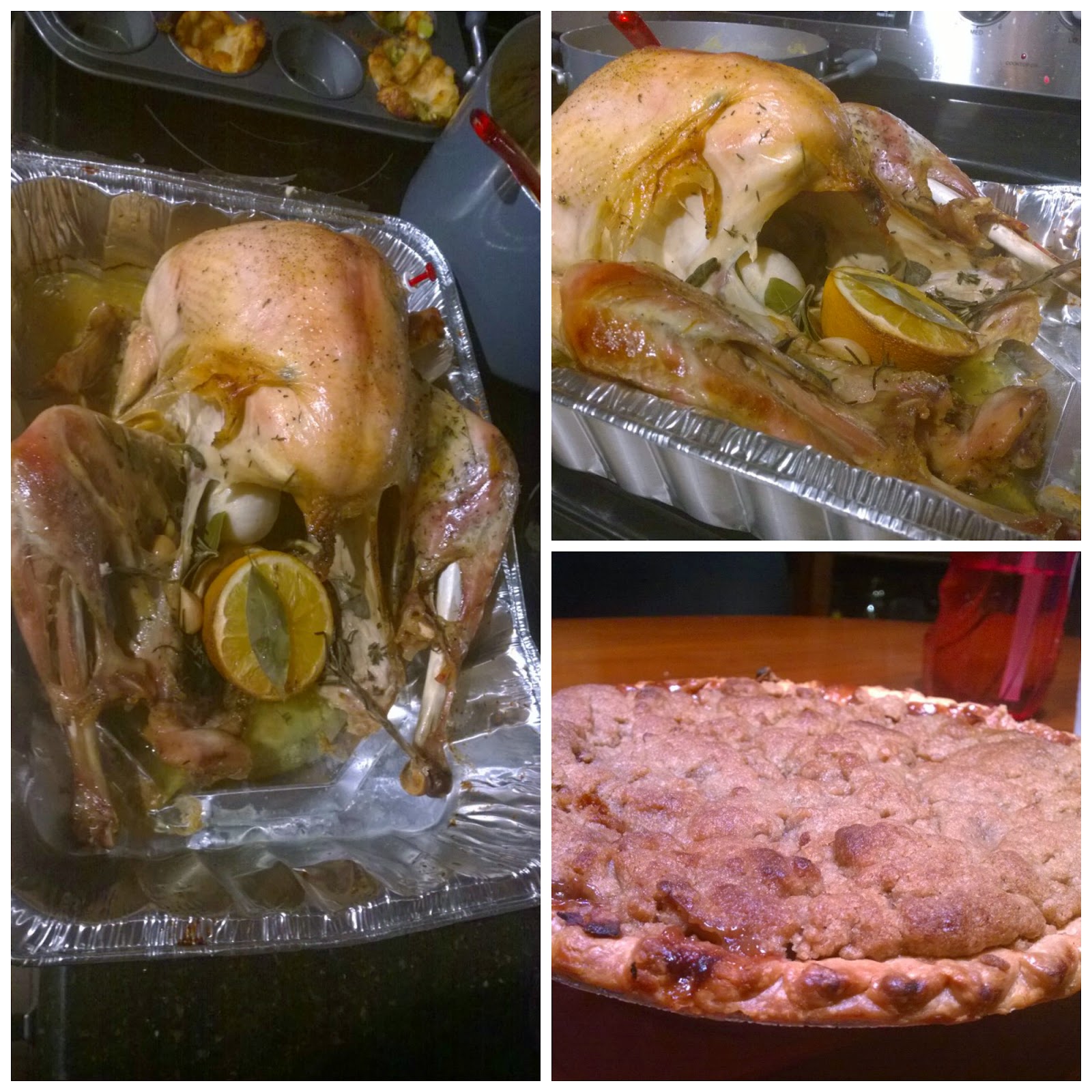 That was the end of our evening. It had been a long day and Laura and I had big plans for the following day, including finding out if Lafayette or American has the better coney dog.
42.331427-83.0457538