One of the greatest perks about having Seattle as your home base is the amazing views from up in the air. I generally recommend people sit on the right side of the plane while traveling in and out of Seattle, because if the flight paths are right, you’ll get the best views. 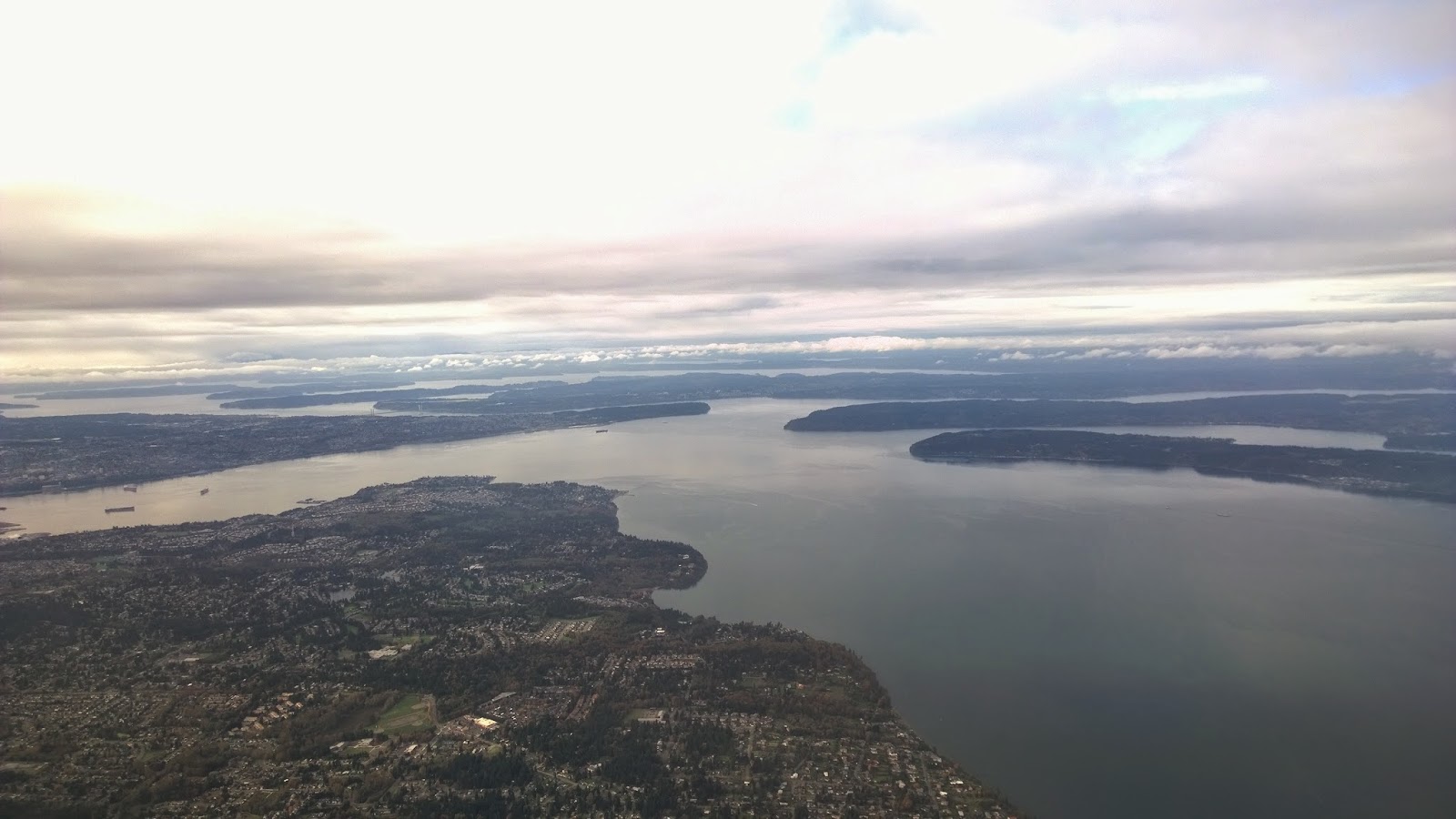 As I boarded my flight and went to sit down, I noticed there was a smidgen of window in front of me, that I shared with the passenger in front of me. When you are on a CRJ, sometimes you get the windowless window seat. This happens to me ever so often. The seat is 7D (though I think there might be other seats that have this issue). Well, at least it is good for sleeping, right? 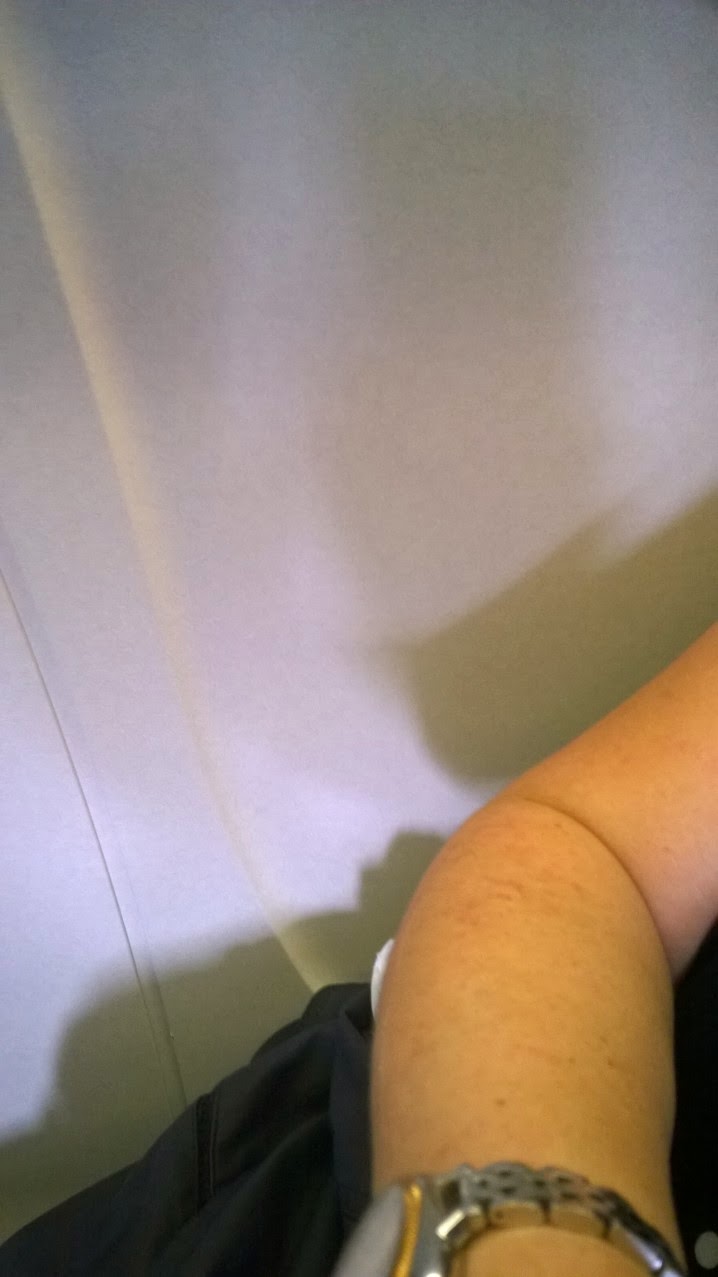 After a day of flying, I arrive at my friend Lisa’s house, as I was visiting with her and her family for a few days before our event. I apparently took zero pictures there, but I actually had an awesome time hanging out and doing fun things. The best part about my job is being able to see friends and family that live in different cities, where if I had a normal job, I might not be able to see them. It definitely helps balance out the loneliness that being on the road can bring.
We did burritos at Freebirds World Burrito, which is a chain that started in Santa Barbara, but has a lot of locations in Houston (among other cities). At the particular location we went to (which I have no clue which one it was), the guy making our burritos was pretty funny and he serenaded us with “Under the Sea.” Turns out he was also an entertainer. We’re guessing for children’s parties.
We also went to Central Market the next day, which is an upscale grocery store owned by HEB. We got some groceries, but then also went to the deli and had these amazing, monsterous sandwiches.
After two days of hanging with Lisa and her fam, it was off to check into my hotel, the Houston Hilton Clear Lake. OK, I have so much to say about this hotel (and a lot of it is not nice). So, let me start off by saying something nice. The hotel overlooked Clear Lake, and my room had a decent view of the lake. Oh, if you’re into the Dateline type of stories, this is the same hotel where Clara Harris ran over her husband, David Harris. 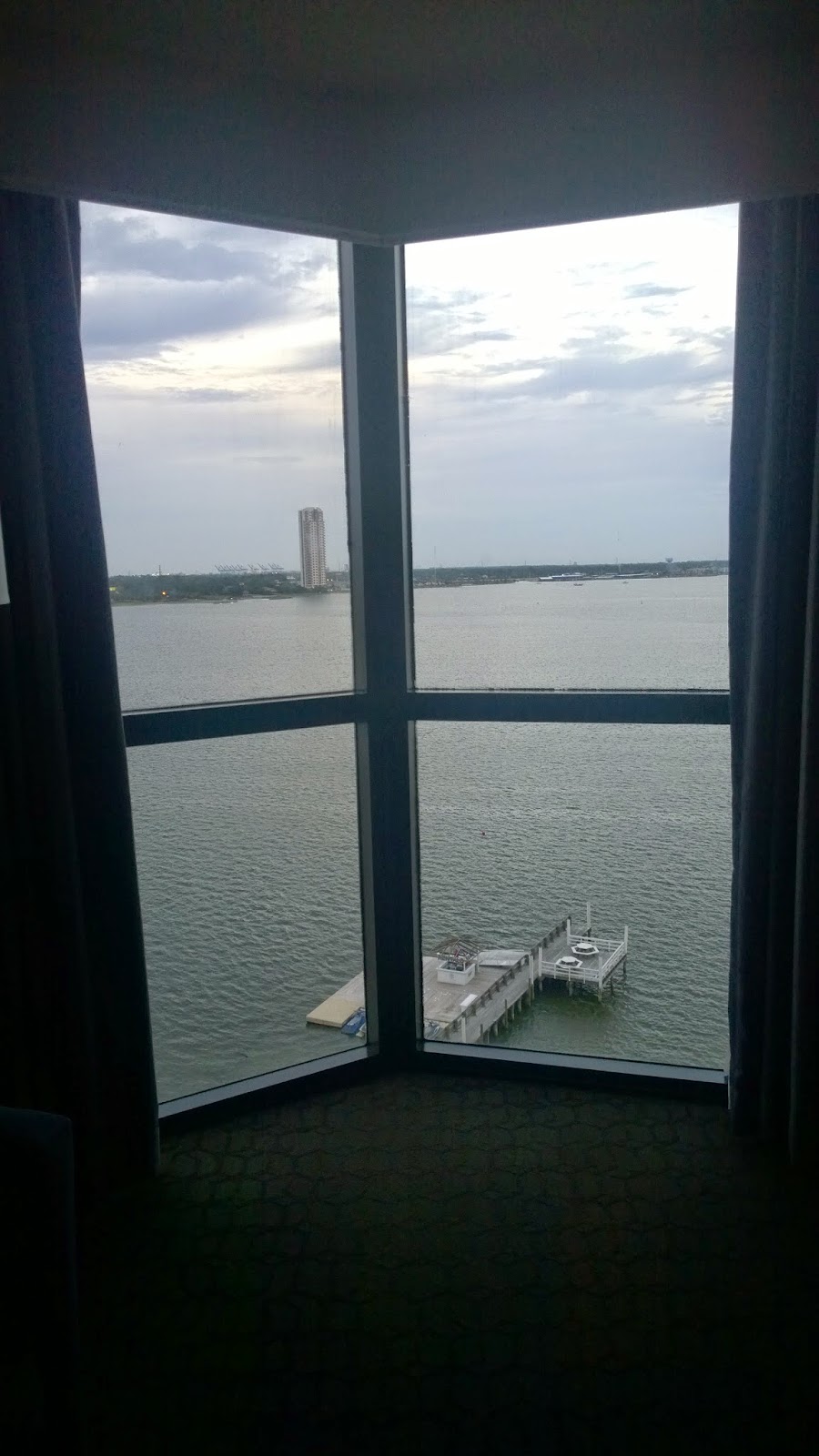 Now I’m a Hilton person. I stay in a lot of Hilton properties. I have status galore. And I can say this is one of the worst experiences I’ve ever had at a Hilton. My room was older, the closet doors were missing, the carpets had perm-a-stains. It was just… not a nice Hilton. It got worse, I’ll explain further down (have to stay in chronological order, right?)
So, the team and I decided to go do something random. Our hotel concierge mentioned something about a boardwalk that was a quick drive. So we hopped in the car, drove about 20 minutes and arrived at the Kemah Boardwalk. 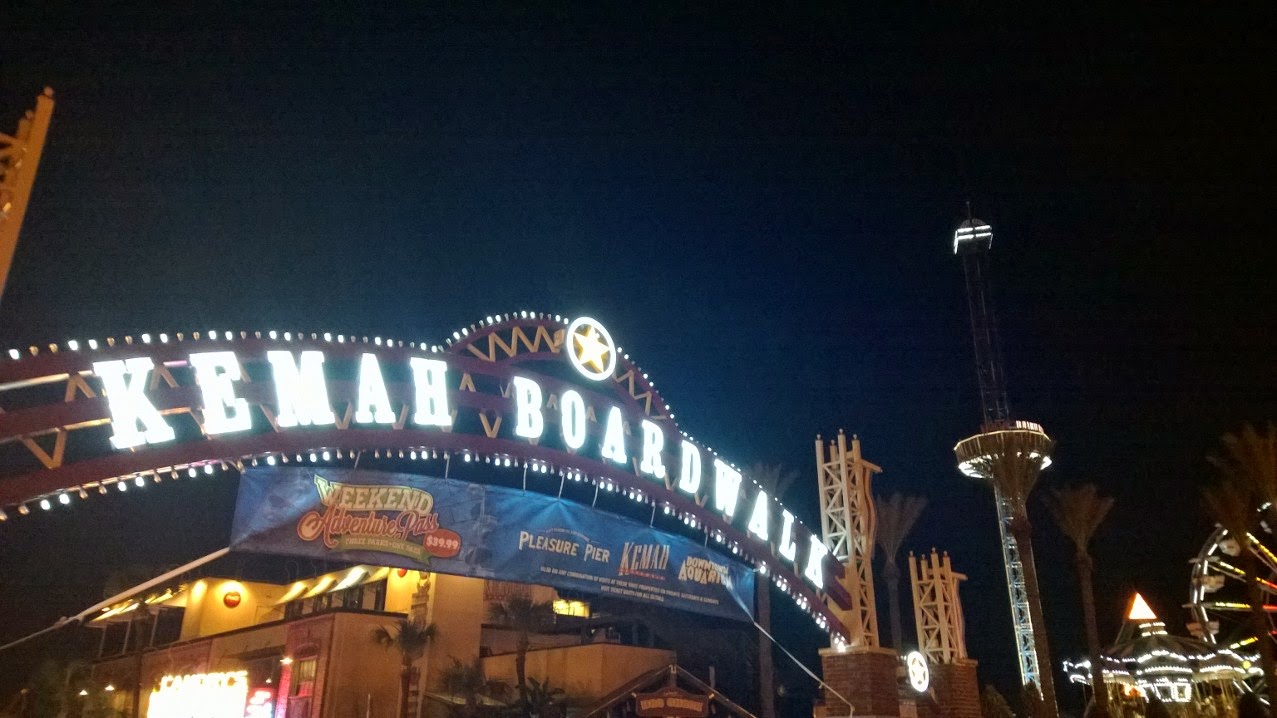 Kemah (which roughly translates to “wind in your face”) Boardwalk is your typical tourist boardwalk; rides, games, restaurants. They claim that over 3 million people visit each year, but we were there in off season, so it was pretty empty.
We bought tickets to ride the Boardwalk Bullet, “second largest wooden roller coaster in Texas.” Actually, at fifty-one miles per hour, it was pretty fast. I rode in the front seat, with my coworkers behind me in row two and three, and we were bouncing around, as the wood moves with the coaster. It had a few good drops, too. We rode when it was dark, which was kind of crazy because the coaster wasn’t lit, so I think it felt like we were going even faster.
Next up was the far less exhilarating Boardwalk Tower, which is essentially a quick ride up to the top, with 360 views and a narrator telling you all about the area (which is why I know so much about it, I suppose).
We soon left and grabbed a quick dinner and went back to prepare for the next day’s work. And the next day we, you know, worked (not pictured, because that’d be boring).
After finishing up at work, we went to dinner at Lupe Tortilla (at the suggestion of our co-worker Kyle). Lupe Tortilla is a small chain in Texas. The decor reminded me of being in an old large home in Mexico, and their menu was extensive. I split the steak and chicken Fajitas with my coworker, and they were delicious. The meats were marinated in lime and pepper, and the guac had some kick to it that went well with the meat. 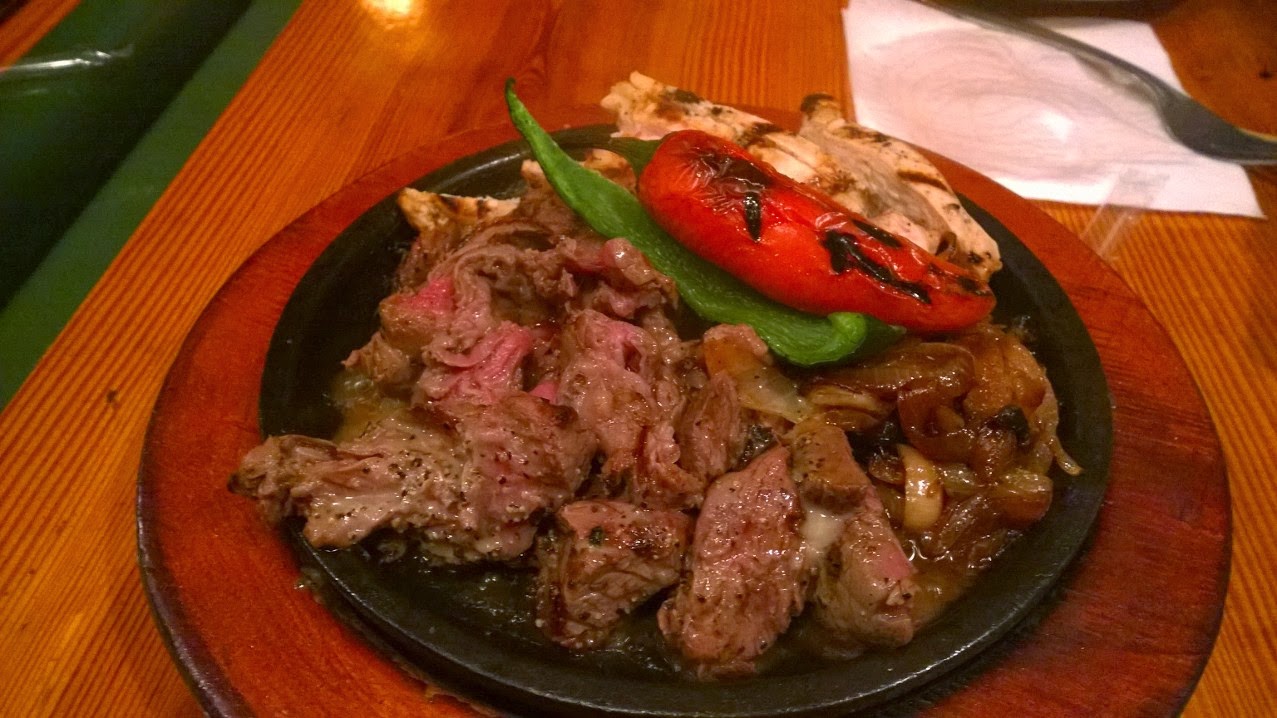 We also got a side of corn on the cob, which how can you go wrong with that. 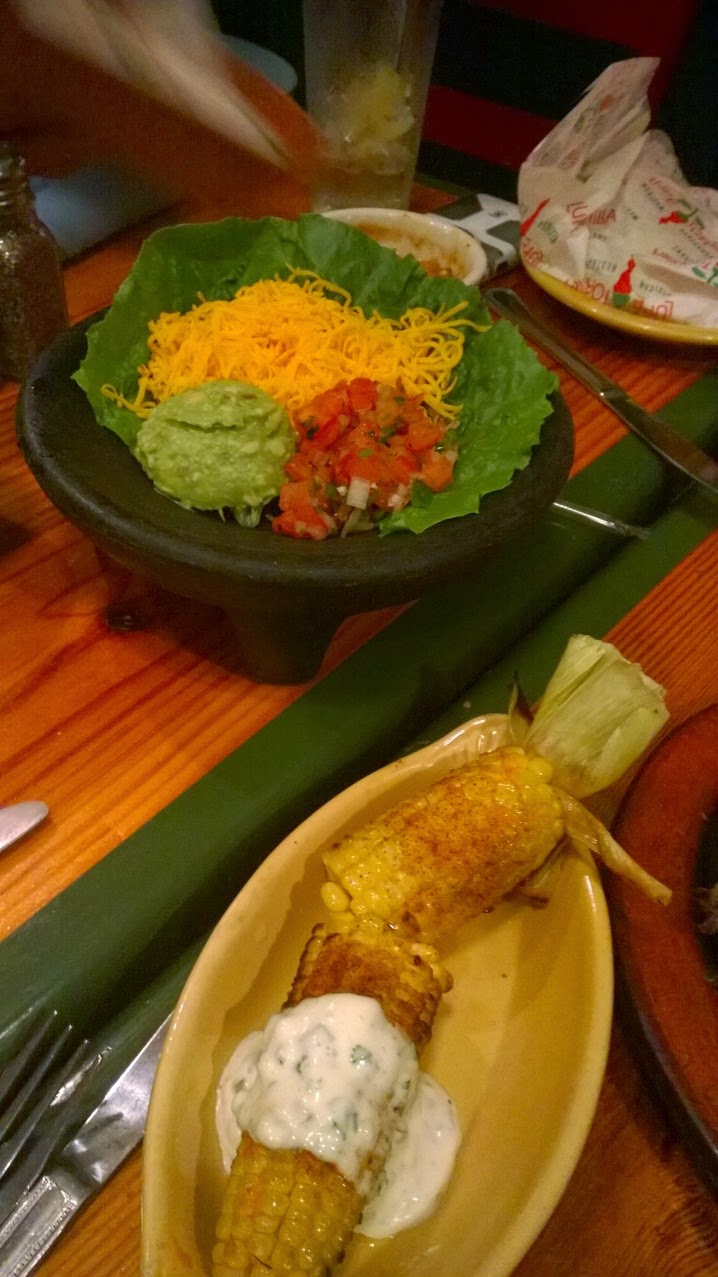 After our event, we had the weirdest experience at BJ’s Restaurant and Brewhouse. First, a few of our coworkers are gluten free, and they really were craving a GF version of the Pizookie, which is a cookie baked in a pizza tin, topped with ice cream. Also, remember, we’re trapped in mall suburbs, we go to suburb type restaurants (which is funny, because I’d NEVER do that back home in Seattle).

So, here’s the weird story. As we are ordering drinks, our server informs us that BJ’s has half off wine on Tuesday. We got excited and ordered half off wine, because, why not (and we’re exhausted, anything will excite us). Then she informed us it is currently Thursday (we all travel back to back, we don’t know what day it is, or what city we are in, etc.) and our wine is full price, but we could come back on Tuesday. Then she just disappeared. A few minutes later a new server appeared and told us he’d be taking over our table, because the first server had to go home. But then, she was working other tables near us all night. So weird.

But anyway, the Pizookies were pretty good. Pictured below is the Pizookie Trio. From left to right, Peanut Butter, Cookie’s and Cream, and Chocolate Chunk. 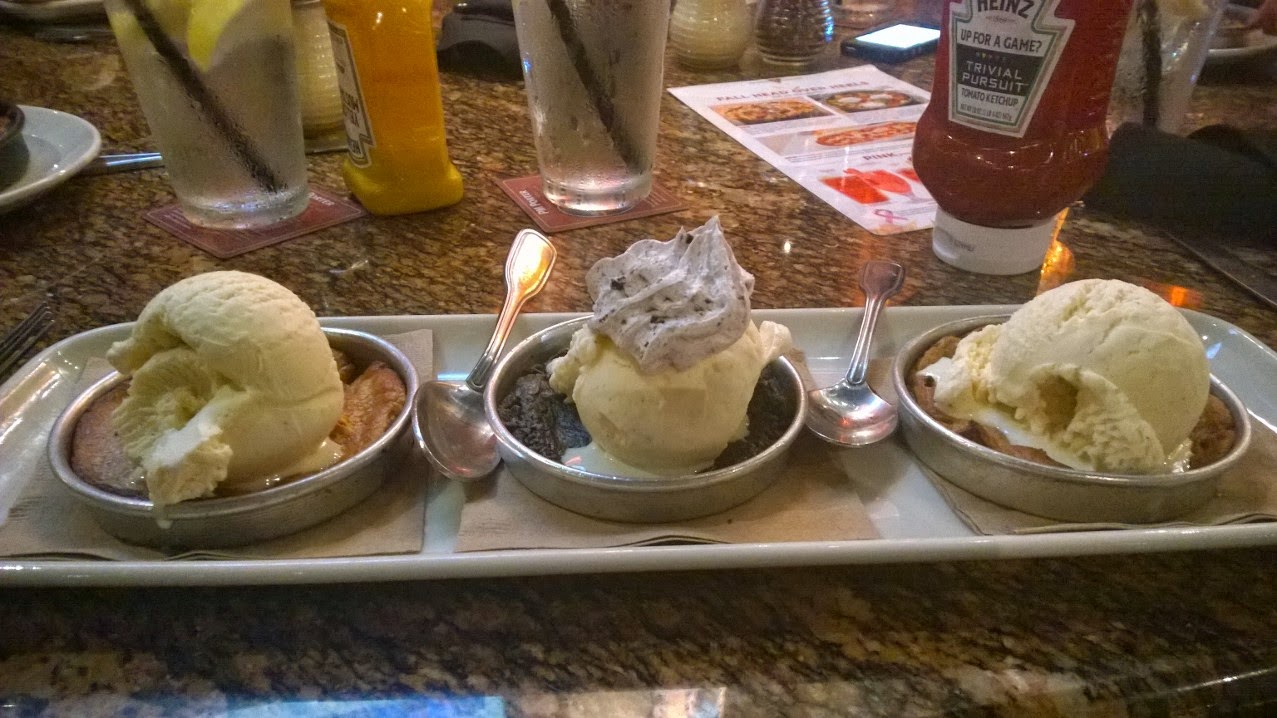 We called it an early night, and went back to the hotel as some of us (myself included) had to go to fly to Dallas. I knew I had a package, so I asked the night desk manager to grab it for me.
I will never understand why hotels can’t find my packages. I present them with tracking info, but somehow they disappear. I’ve been told numerous times the package doesn’t exist, which I refuse to believe and I will crawl through hotel cages and there my package will be. I always find them. There has to be a better way, but I digress.
So, I get my package, I even ask if I have a second. I’m told no, it’s the only package. I felt like I should have asked to look, but I was tired and figured I only did get one package.
The next morning, as I’m checking out (and mind you, our truck had already left to drive to Dallas), I get a call reminding me that I haven’t picked up my package. I already feel myself fuming.
Well, I had two packages. They gave me one. I didn’t realize it was a double package order, as sometimes things are shipped to me and I have no clue what I’m getting. And it’s a 40 pound crate. How am I supposed to fly with a 40 pound crate to Dallas from Houston? And the hotel was literally no help.
I called National, changed my car rental, and drove the four hour drive to Dallas. It wouldn’t have that big of a deal except that it cost me an unused plane ticket on American (and Delta doesn’t fly Houston to Dallas, so I didn’t even have any Diamond bargaining power) and my rental was now a city to city rental, which means no unlimited miles, and paying 30 cents per mile. So, by Hilton not giving me my second package, they cost my budget about $550.00. That’s an expensive package.
And so I drove. And drove. I re-listened to all the Serial Podcasts released so far, then jammed out to some random Spotify stations. The drive from Houston to Dallas is quite flat and pretty much looks like this the whole way… 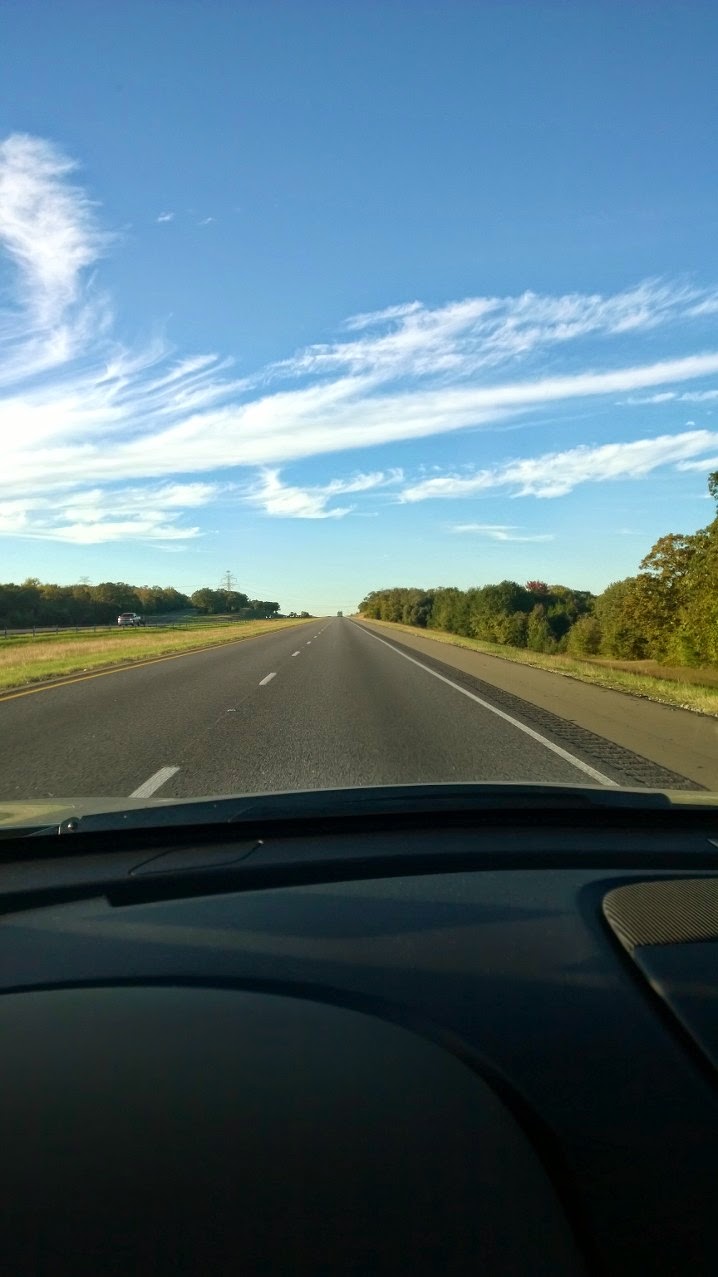 I arrived in Dallas, and went straight to the mall to get everything set up. I was there until about 1:00 a.m. (with a quick shopping break because Nordstrom had a crazy sale, and finally checked into my hotel Westin Dallas Park Central at about 1:30 a.m. I wish I could tell you anything about it, but I checked in, fell asleep, woke up, checked out by 7:00 a.m to open a store.
Our store opening went quite well, but when I got to work I noticed my new Tory Burch cardigan had the alarm tag still attached. So, I do what any normal person would do when running an event: Tweet Nordstrom. And guess what, it worked!
Nordstrom corporate contacted the customer relationship manager for Nordstrom at NorthPark Center and she came to find me and remove my tag. It was amazing and I am so thoroughly impressed. This type of awesomeness is why Nordstrom gets way too much of my money.
Then it was concert time! We were in Dallas, so of course it’d make sense to have a country superstar, or in our case stars. First up was The Band Perry followed by Tim McGraw. 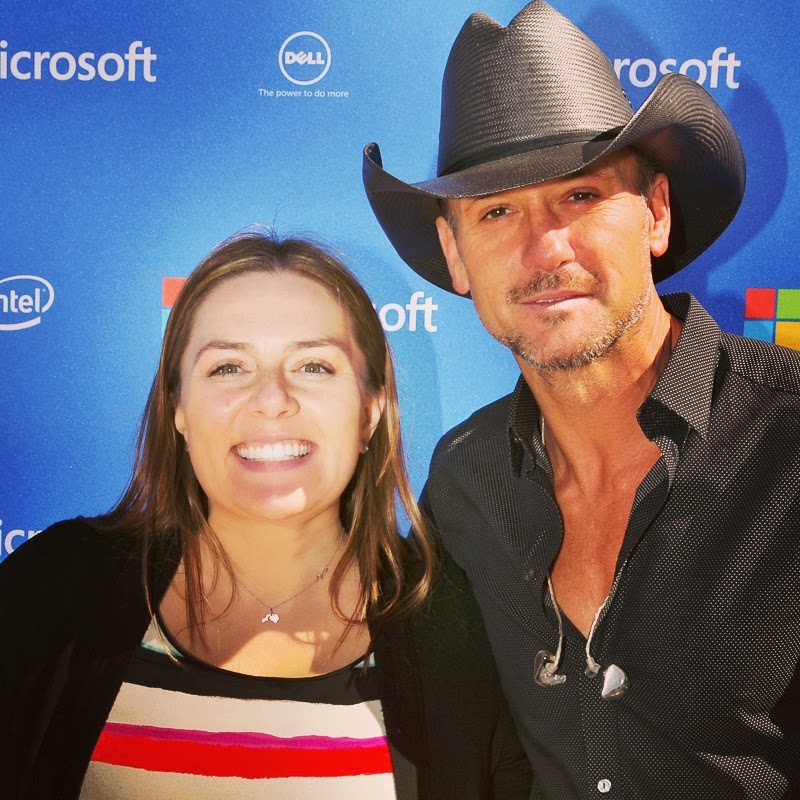 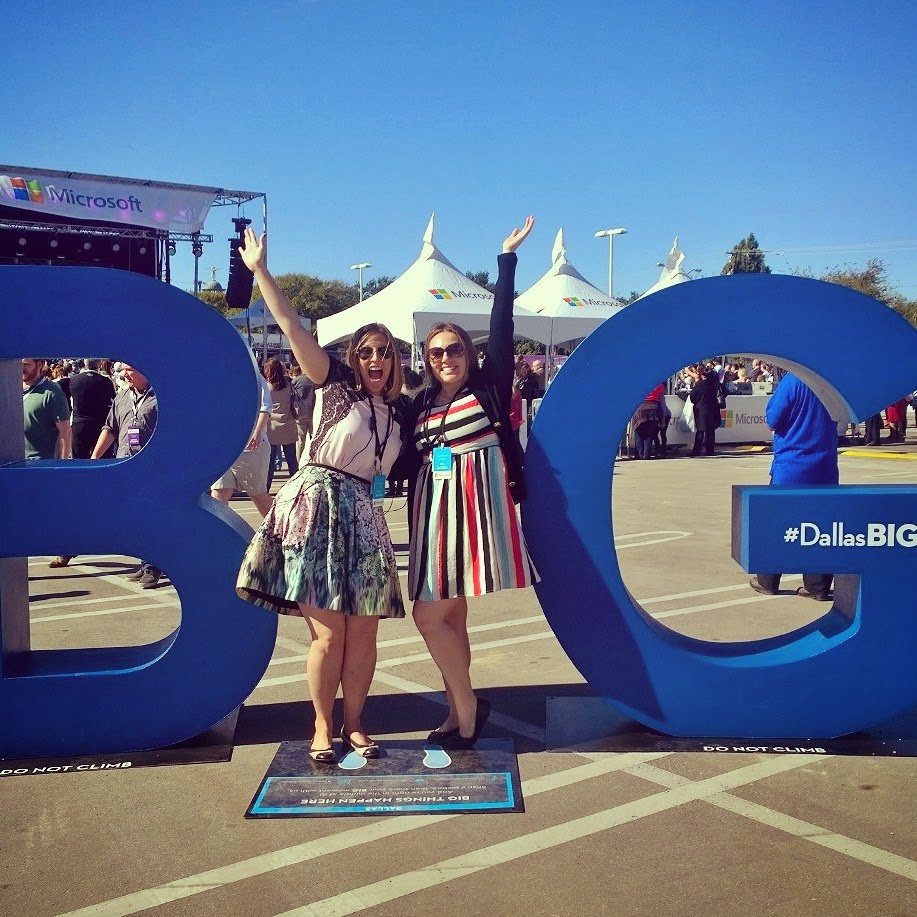 I love slash hate when we have afternoon concerts. They are always a little more stressful, but then you’re done early and can get sushi and beer with your co-workers, and then… fly home!
We hit up Kona Grill (because we’re in a mall) and ordered sushi (in a land locked state) and a Corona, which is always what I want on a warm day after an event. 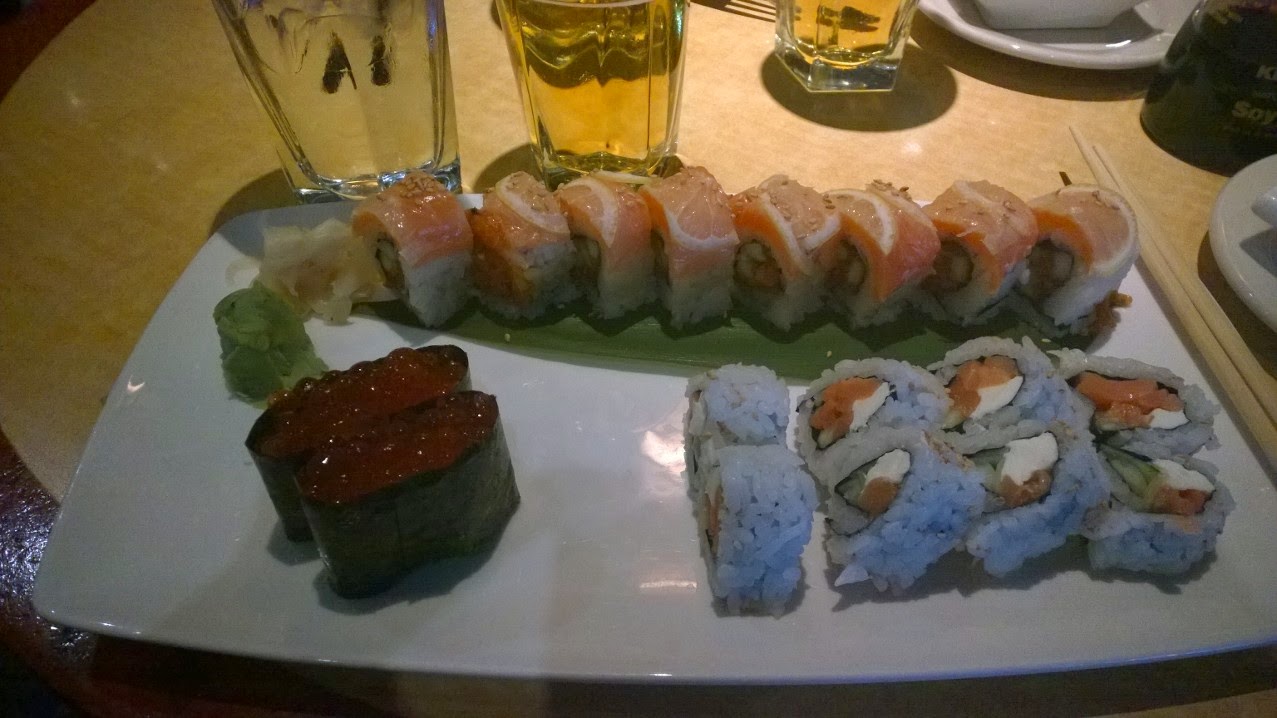 Then it was on to DFW and home to Seattle (for two whole sleeps in my bed!). 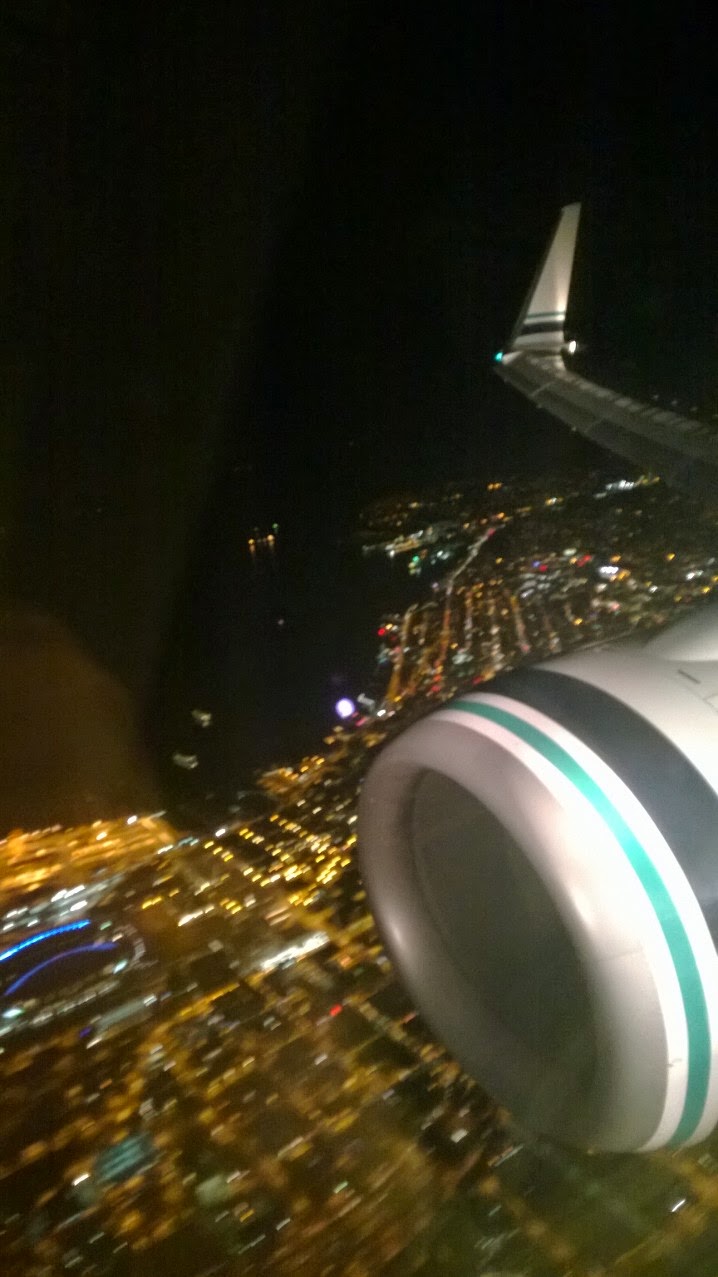 Do you stop at scenic overlooks? My husband, @ceng

Our maiden voyage was to Turkey Quarter Campground

Secluded and shaded pull through spot with a deck

Middle of the night (5:30am) bathroom run wasn't a

Adding a backsplash to the #rpod192 using @thesmar

RV problems. We are back home and fixing some kin