Well, this epic day, which happened to be my birthday, was so great that I broke this post into two parts. If you want to go back and read part one, you can do so here.

After I left the museums, I walked a few blocks to Eventide Oyster Co. I’ve heard great things about this place and definitely knew I was checking it out for my birthday lunch.

I was able to get a seat quickly at the bar (dining alone has many perks including quick seating) and was greeted by a very friendly bartender (who I later found out was named Ryan). I was also greeted by the man sitting to my left. He was from upstate and had to come to Portland for business. He helped me choose oysters and also suggested I get an oyster shot to celebrate my birthday. Of course, I ordered one (with Tequila, as there were a few to choose from). 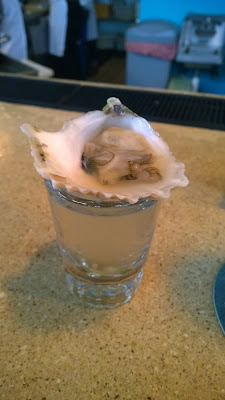 After shooting my oyster, I asked Ryan for a suggestion and received a glass of the Secco Rose. It was exactly the bubbly-ness I was looking for and I knew it would be delicious with oysters. 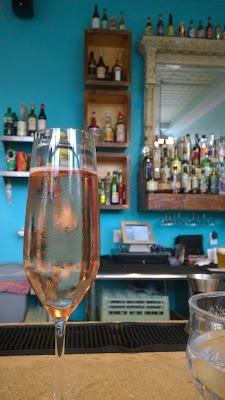 Then it was time for oysters to arrive! Based on suggestions from my bar neighbor and Ryan, I ended up with (2) Winter Point Select – West Bath, (2) Dodge Cove – Damarisootta, (2) Taunton Bay – MDI, and (6) Wild Dam – NewCastle, ME. I’ve never met an oyster I didn’t like, but the Wild Dam oysters were my favorite of this bunch. Eventide also has an vast array of accoutrements and I chose the red onion ice and the red wine mignonette. While both great choices, the oysters were so wonderful that I barely used them. 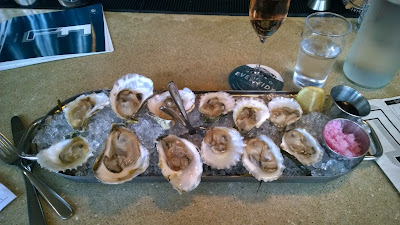 After oysters, next up was the lobster roll. I’m in Maine, I need to eat as much lobster as I possibly can. Eventide’s lobster roll did not disappoint. In fact, I wanted like 17 of them. You can have a choice of a few sauces and I chose the brown butter vinaigrette. I cannot say enough good things about this lobster roll. The butter sauce, the large pieces of lobster cooked so perfectly and the soft roll it was served on. Seriously, my mouth is watering just thinking about all of its amazing-ness. 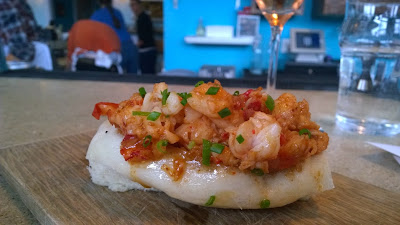 I wasn’t done sampling Eventide’s menu quite yet. I placed an order for another Rose and (based on Ryan’s suggestion) on the yellow fin tuna crudo. It was served with radish and scallions in a ginger sauce. It was delicious. 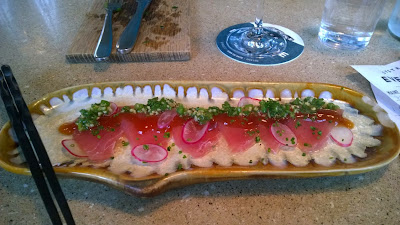 If I had to sum Eventide Oyster Co. up in one word, it would be fantastic. Ryan was absolutely awesome and even wrote me a list of other bars and restaurants in the city that I might enjoy.

Then just after I paid the bill, I was told I had to stay a moment. And then this came out…A fried oyster roll with pickled onion, tomato and jalapeno! Who wants a birthday dessert when you can have more oysters!! 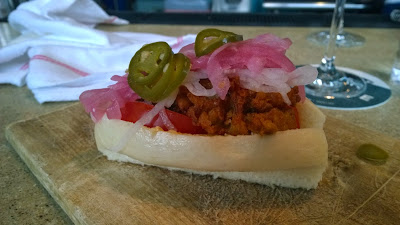 Overall my lunch at Eventide was absolutely perfect. My only regret is not trying the Green Mimosa (celery, champagne, celery bitters) but I had other places to check out and I didn’t want to be too day drunky.
My next stop was an unplanned escapade into Salt Cellar. It’s a salt store. What was I doing in a salt store? Who knows, the bubbles made me do it. I ended up trying a bunch of salts, and buying salts, and now I have a bunch of random salts in my apartment. Oh, rose…
Then it was off to Sonny’s. Sonny’s is in the old Portland Saving’s Bank and is a really cool spot. On this particular Wednesday afternoon, it was quite empty but I can imagine it would get quite busy here, especially in season.
Sonny’s makes their own infused spirits, with many varieties to choose from. I ended up trying two cocktails while writing blog posts at the bar. While the name and type of cocktails totally escape me, I can assure you they were both delicious. 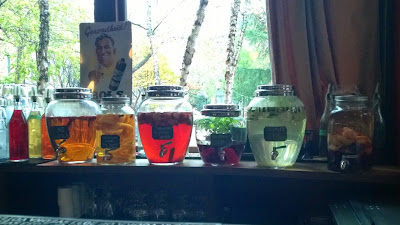 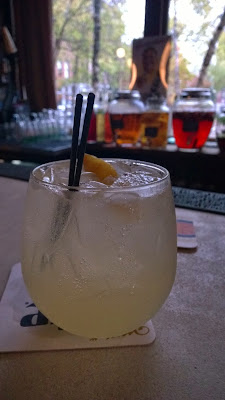 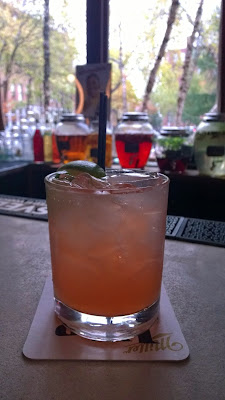 It started raining pretty hard outside, so I stayed put for a bit. I actually ended up spending about two hours at Sonny’s and had some quality time writing and being by myself, which is totally what I needed as work is crazy and is about to become even crazier.
I started heading back to the hotel, as there were two other places that were on my list. The first place was The Salt Exchange for happy hour. I arrived and the owner happened to be behind the bar. We chatted a bit about the restaurant and bar and then he made me a fabulous drink called Leather Loafers, made up of bourbon and rye, cardamaro, chocolate bitters, and orange peel. It was delightful and a bit different, as it was my first whiskey drink of the day. 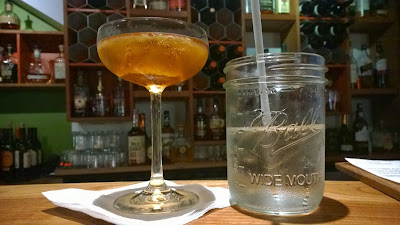 I also decided I needed food to go along with this drink. I decided on the happy hour dish of Mac and Cheese. I am so glad I did. It was smoked gouda mac and cheese topped with a pork belly slab, jalapeno and herb breadcrumbs. The serving size was perfect and it was so delicious and rich. Also, I think all mac and cheese should come with a pork belly topping. 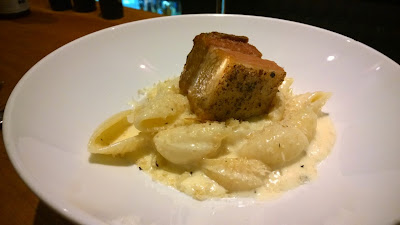 I wanted to stay at The Salt Exchange and try more of the dishes, but I knew I had little left in me and had one more place to try. It was raining pretty hard (that Nor’Easter was heading in) so luckily my next stop was just across the street.
In’finiti Fermentation & Distillation.is a brewery and a distillery and a restaurant. I grabbed a seat at the bar and the bartender helped me choose a drink. I went with the Rye Hilt which was Bulleit rye, amaro montenegro, lemon, coffee almond bitters, and an Underberg rinse. 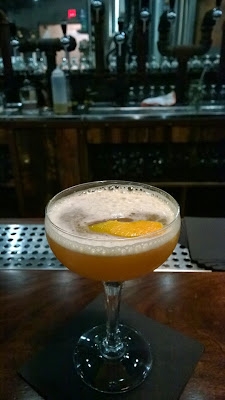 Considering that In’finiti was also a brewpub, I thought I should try a brew or two. But more alcohol means I needed to order more food. At this point, the cocktails were making ordering decisions for me and as soon as the bartender said their chicken wings were really good – I was sold. And of course, I ordered them spicy. Side note, they offer pretzel crust pizza. I did not indulge, but it sounds like something I’d enjoy. 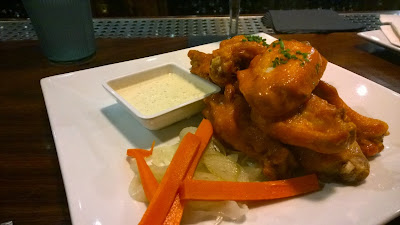 And now, for choosing a beer to go with the wings. Thankfully I could order beers in a schooner size. I chose the Primus and the Doreebier. Both were quite good but I think I preferred the Dreebier, which was a Belgian blonde. 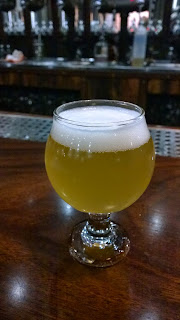 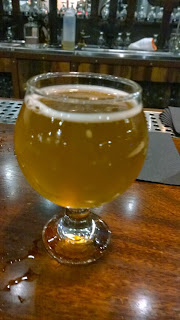 It was about 7:00 p.m. and time for me to head back to the hotel and nap. A funny thing happened, I fell asleep and slept 12 hours. That’s not exactly true, I did wake up about 10:00 p.m. to go to a late dinner, but it was raining so hard outside and I hadn’t slept in weeks due to extensive work travel and I decided the best birthday present I could give myself was a crazy amount of sleep. So I fell back asleep and slept until 7:30 a.m.
This was one of the best birthdays I’ve ever had, and I think from now on I will be using my birthday as an excuse to visit a new city and have an alone day where I eat too much, I drink too much, and I sleep too much.