After my 30 hours home in Seattle, it was time to head to Toronto. Now, I have a love/hate relationship with business travel to Canada. There are many reasons as to why, but to start, it’s always a little anxious crossing the border (and yes, I have a Nexxus and Global Entry card), and you never know if you’re going to get some disgruntled agent that reminds you that he can “send you home.” Luckily, this trip my border agent was pretty friendly and I made it through customs without issue.

I arrived at the hotel, The Toronto Marriott Downtown Eaton Center, and was starving after my day of flying. It was really cold outside and while I should have gone out and about to explore, I was exhausted and sometimes I get lazy and eat at the hotel simply because it’s one less receipt to expense.

Trios Bisto, the hotel bar, was actually really good. I ordered the small bowl mixed green salad to start. It was very fresh and the dressing was a lemon poppy seed Greek yogurt dressing. It was a surprisingly simple but delicious salad. 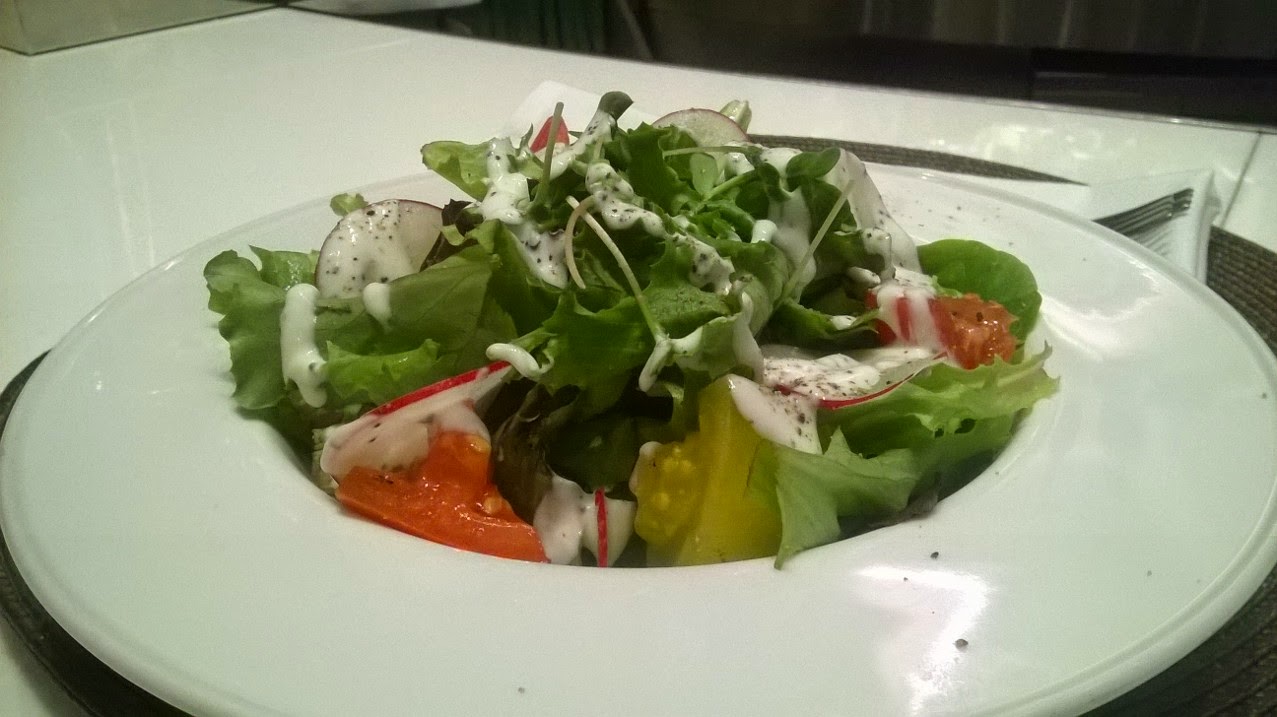 Now, when I was talking about my love/hate relationship with Canada, poutine definitely goes in the love category. I lived in Montreal for some time and used to over indulge, as I lived directly above a La Belle Province. And yes, I know you can get poutine almost anywhere in the States now, too, but it’s somehow not the same.
This particular poutine was not traditional, was very rich, and I couldn’t get enough. It had pulled pork, maple pepper bacon, and true Quebec cheese curds. Seriously, if you go here, get this dish. 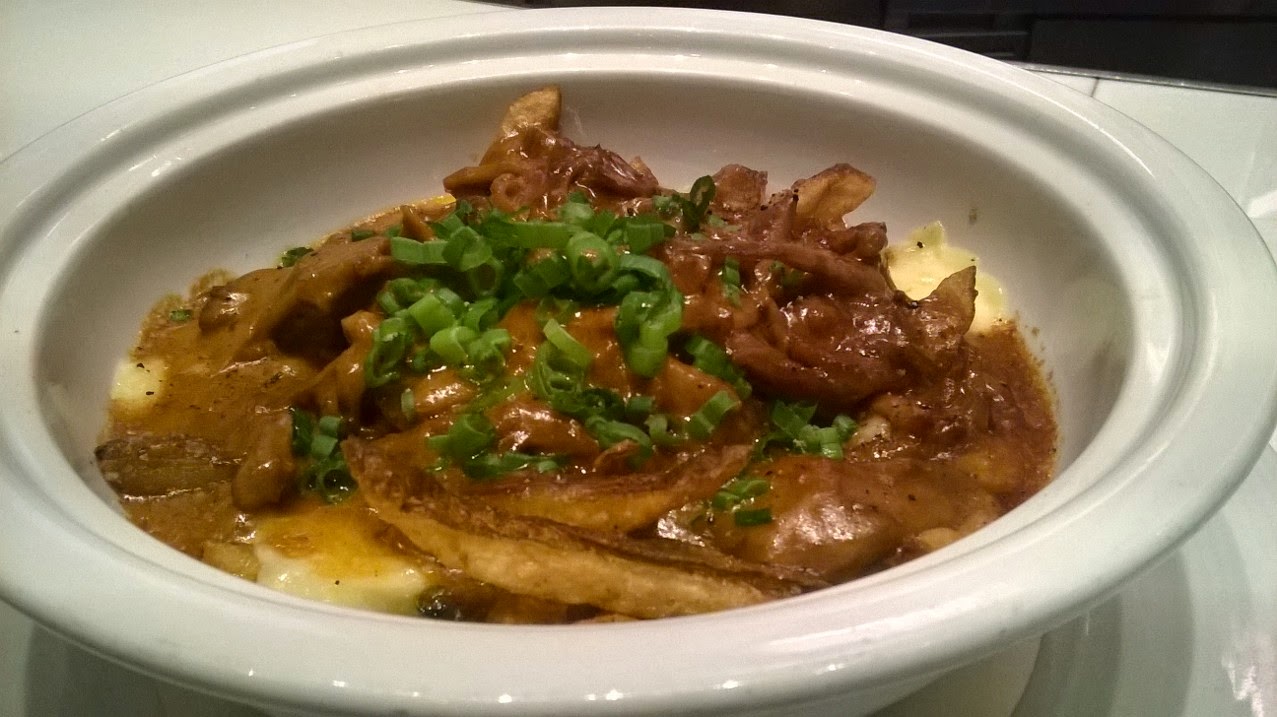 After eating this, it was time to work out. I did that for a few hours before doing my crazy expense report for like four hours, then finally getting to sleep. The next morning, I ordered my traditional Marriott breakfast frittata for room service, and enjoyed the view of the city, and Trinity Square. 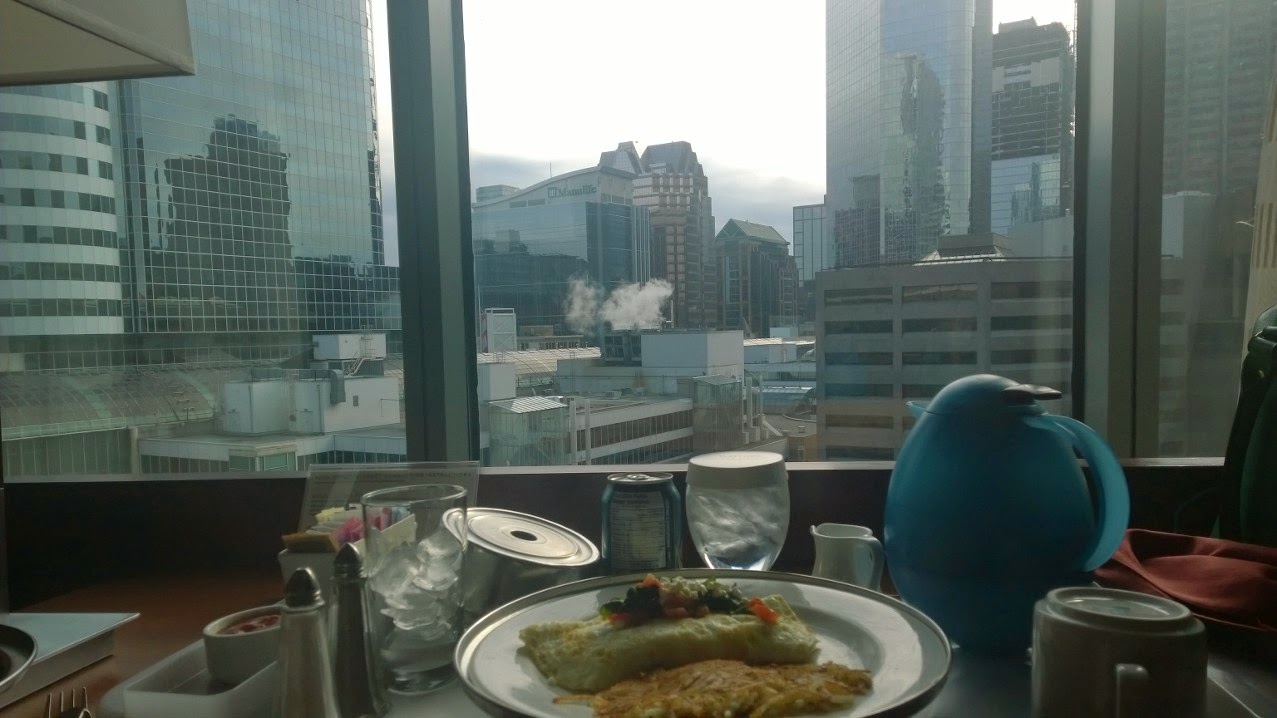 We had a lot of work to do at the mall, which thankfully was a quick walk from the hotel (with minimal outside time). We stock the fridge with drinks for employees, and it varies by market, but I have not seen Five Alive in years, and was surprised it was in the fridge there. Is this a thing in Ontario? 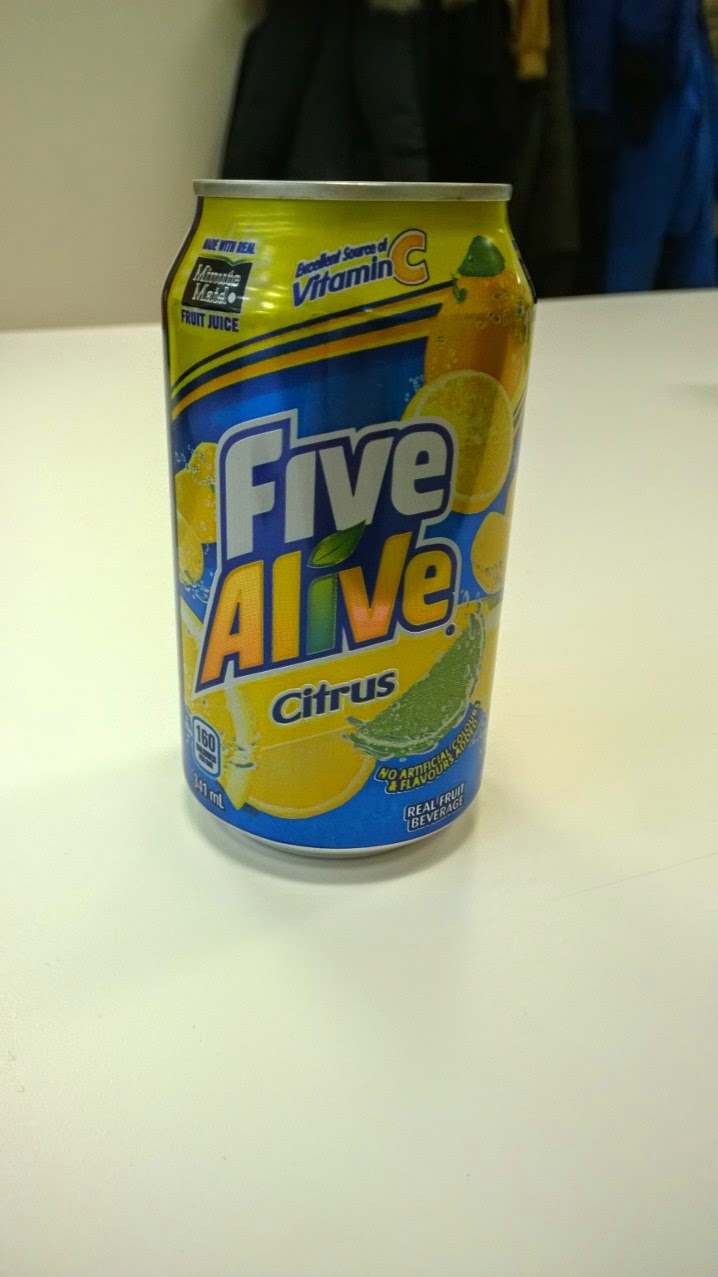 It started snowing when we were in the mall, so we weren’t going to far for dinner. Joey’s is where we ended up (hey, it’s what we could agree on and it was in the mall). I got the Bombay Butter Chicken, and it was surprisingly spicy, but it totally hit the spot. The fire alarm kept going off when we were at Joey’s and no one really seemed to notice, nor care, so that was weird. Also, they ran out of silverware, and we had to wait until more was washed. I thought that was a bit odd, too. 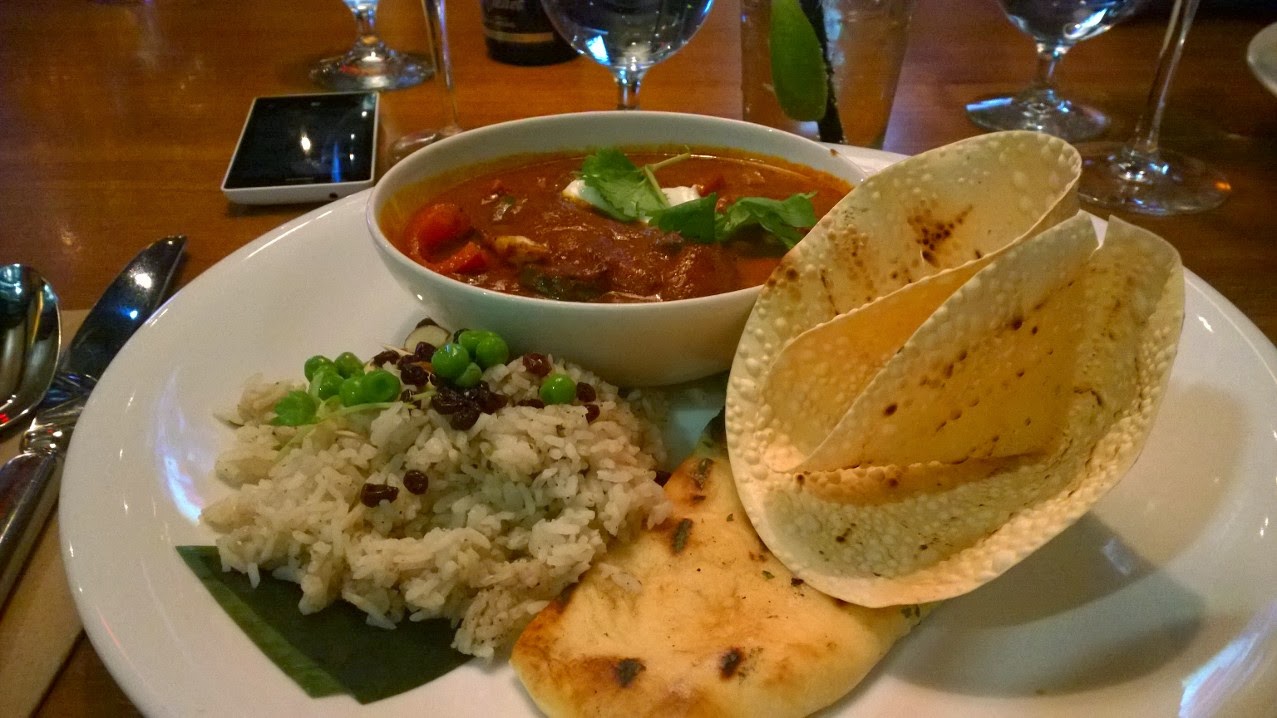 After Joey’s we had a little more work to do at the mall, before heading to the hotel for a little bit of sleep. It pretty much stopped snowing (though it was so cold) but the snow stuck on the ground. 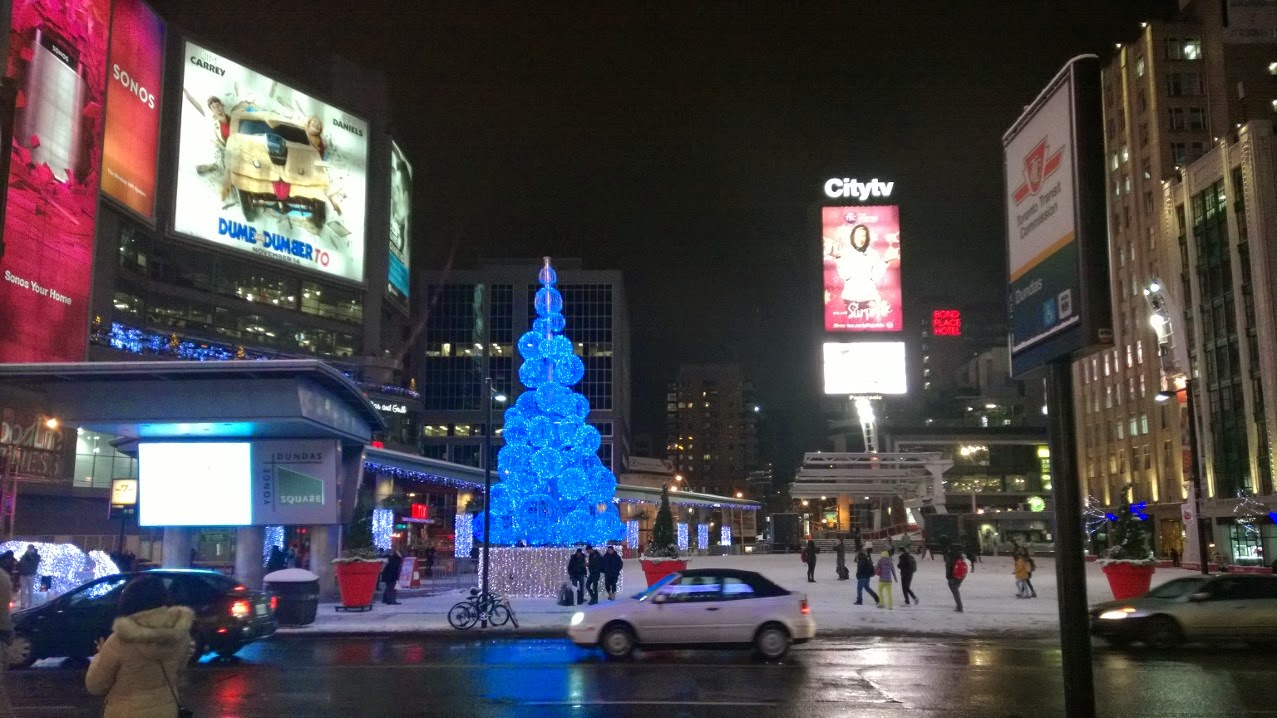 I walked through Trinity Square to get back to the hotel, and there is a church called Church of the Holy Trinity in the square, which was built in 1847. The story is when Eaton Centre was built, the church was to be knocked down, but it was saved and the mall was built around it. 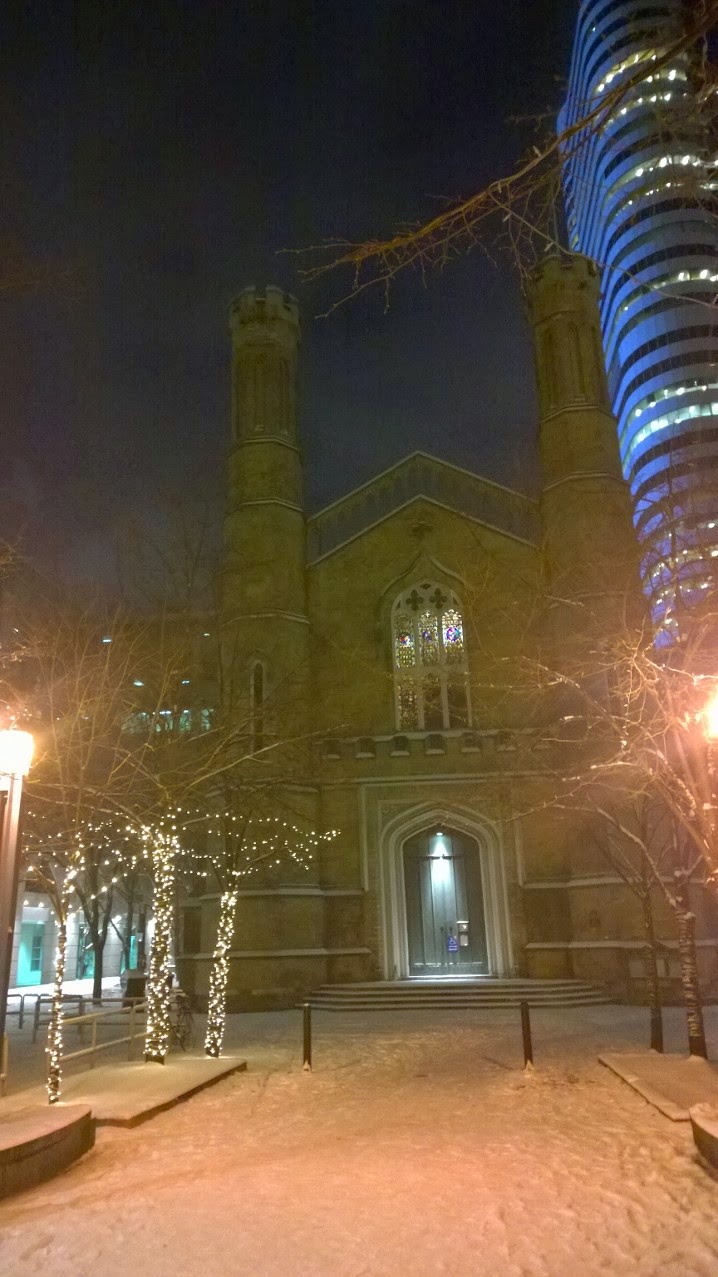 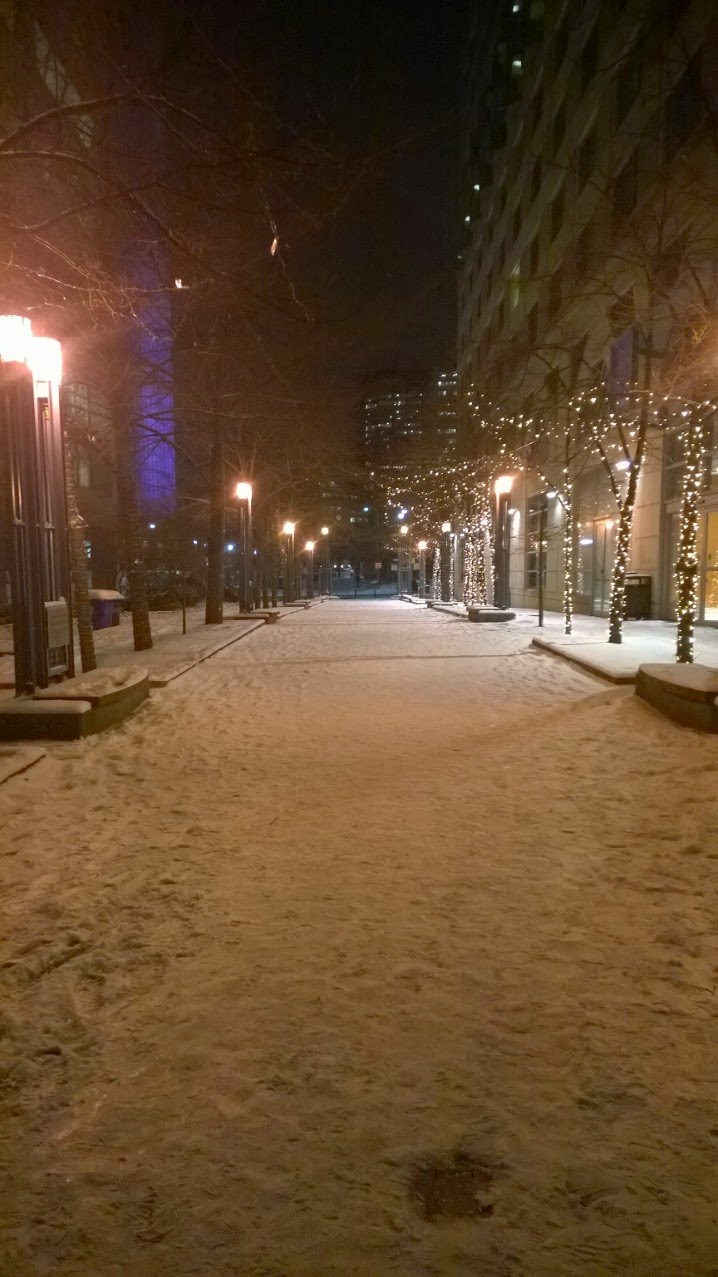 Our store opening went really well and A LOT of people showed up. It was awesome. After the store opened, my co-worker Kyle and I went to Bourbon Street Grill for a quick lunch. I’d been craving a burger since I got to Toronto, but Canada has a law that your meat must be cooked to medium well, which isn’t a burger anymore, that’s a hockey puck. I tried to convince Bourbon Street to cook it even just medium, but they wouldn’t.
Instead I got the prime rib sandwich. It was fine, what you’d expect from a mall chain, but it wasn’t a burger. 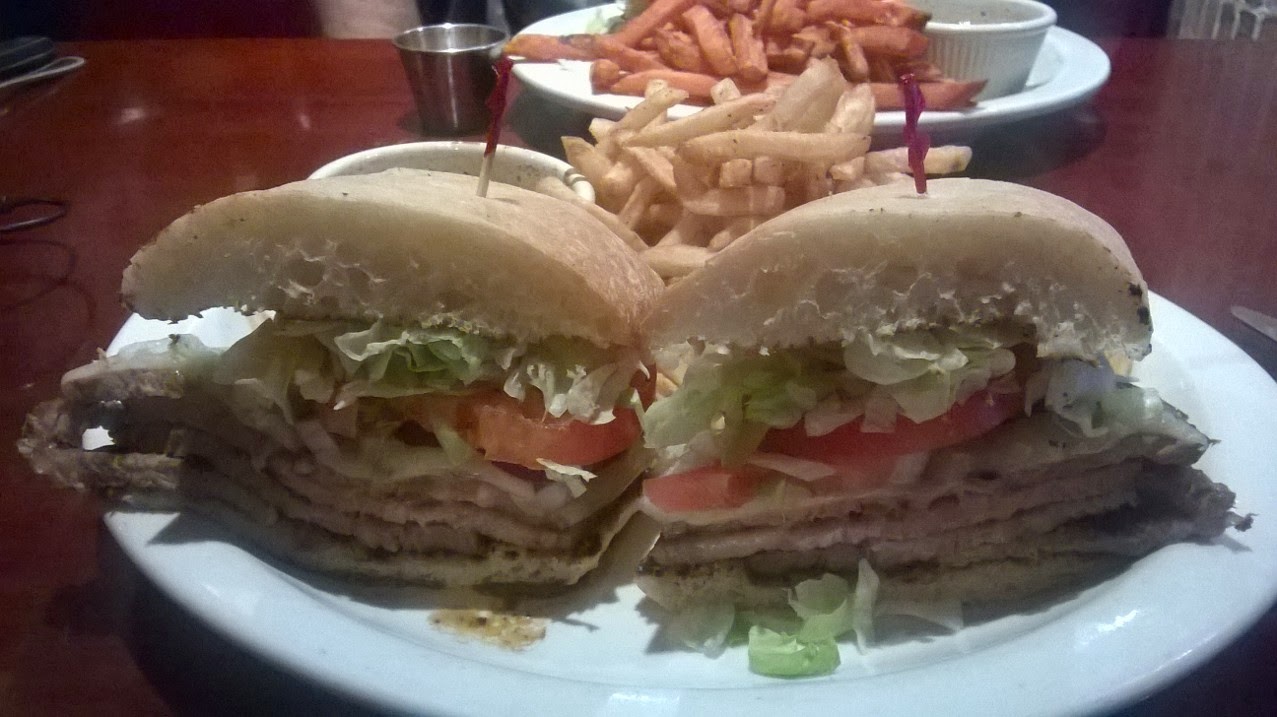 We ate lunch and went back to the store for our event with Tie Domi. He was very nice and personable, and told me stories from back in the day when he used to fight Bobby Probert. Tie also holds the record for most NHL fights, at 333, and he includes the 333 in his signature, which I thought was pretty cool. 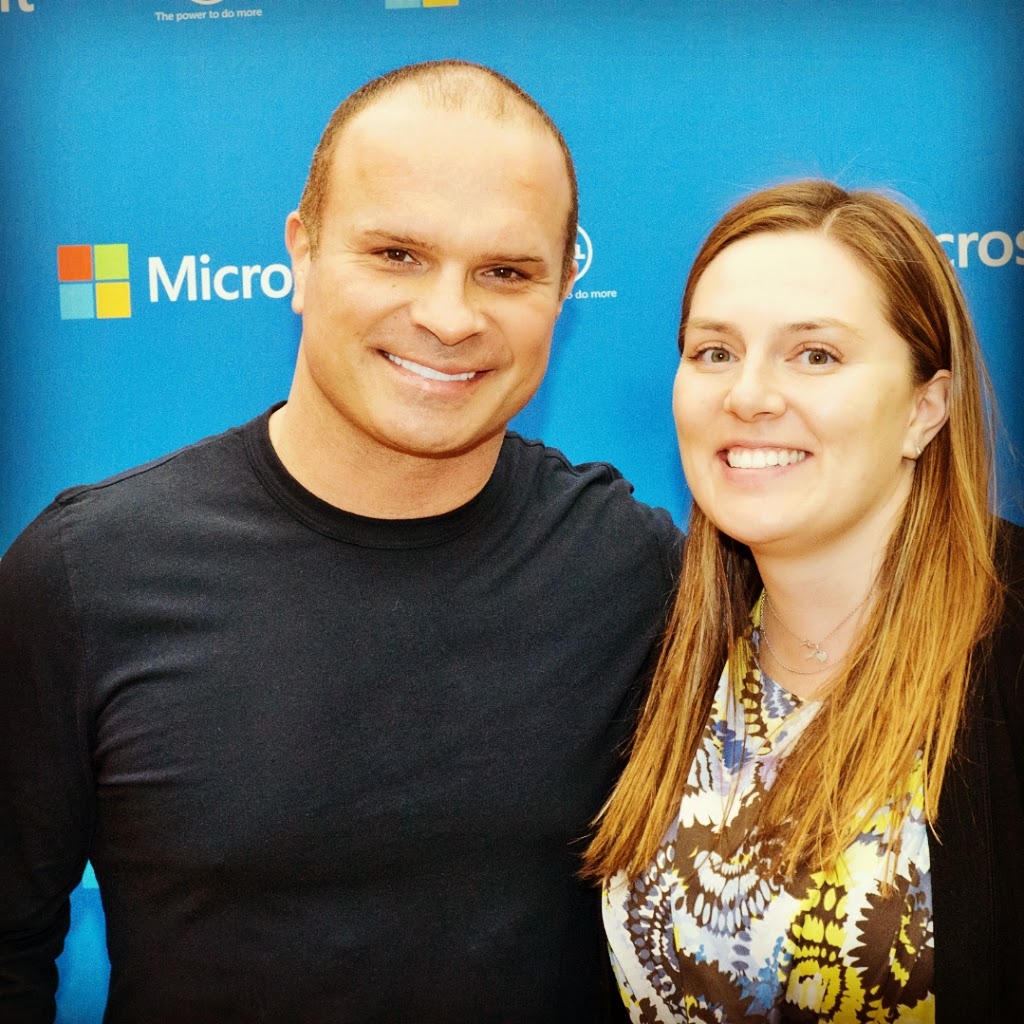 Our event was done and our long day was over. I had an early morning flight to LA through Atlanta, so we just ate at the hotel again.

I had a nice big IPA of some sort that was well deserved. 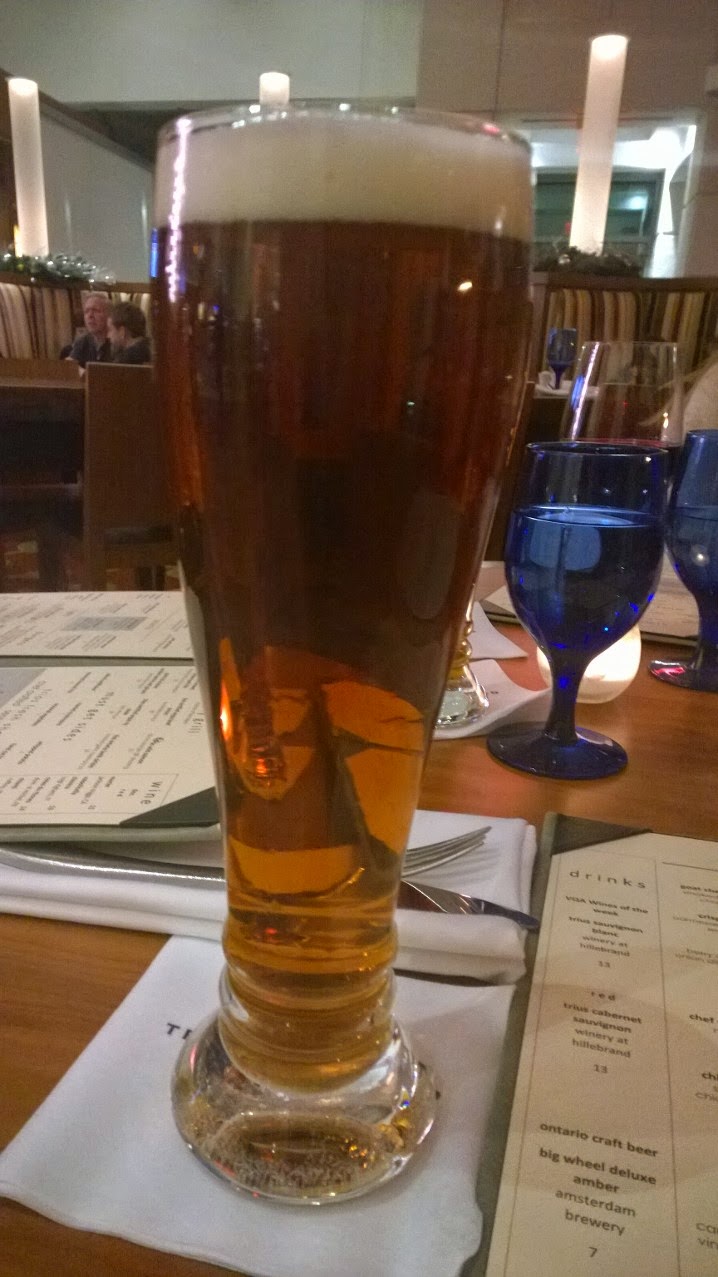 And a filet (yes, they will let you have this cooked medium rare) over cauliflower and a side salad. It was good, but I would have killed for a good burger. 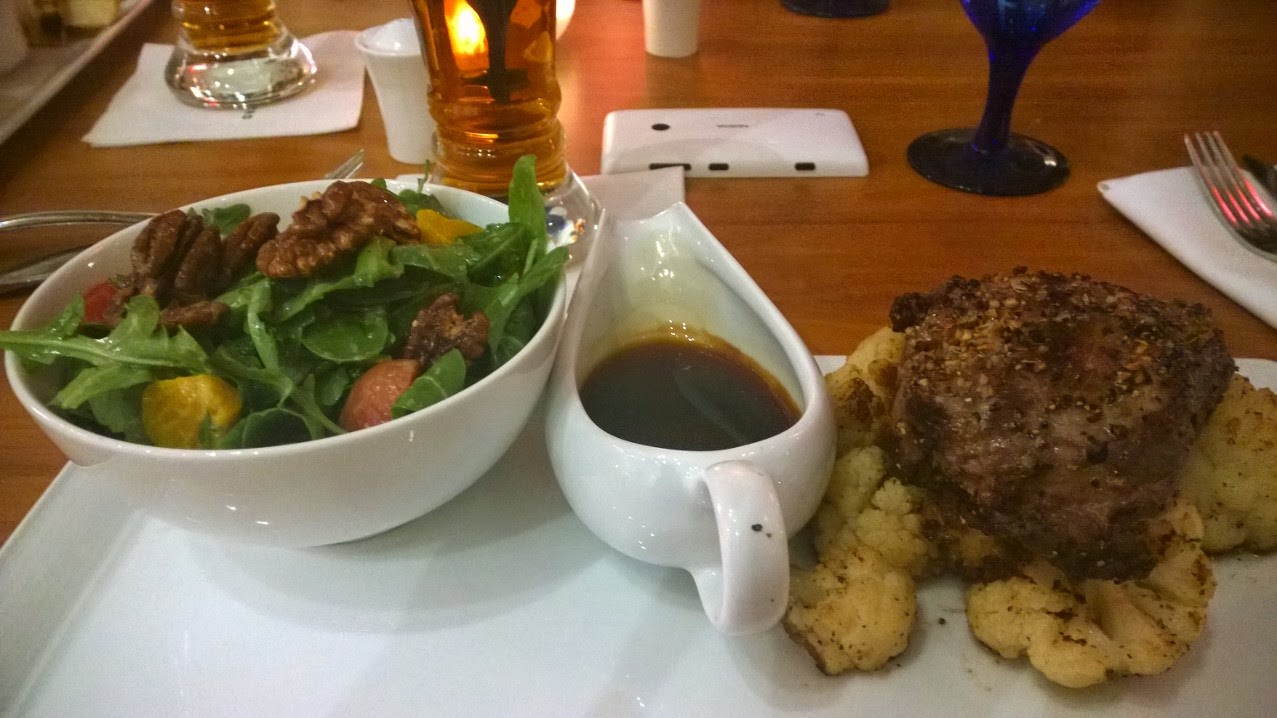 And finally, it was time to retire to my room to get ready for my flight to LA and the last opening of 2014. This was the nighttime view and I decided to sleep with the curtains open, so I would fall asleep with the city as a nightlight. 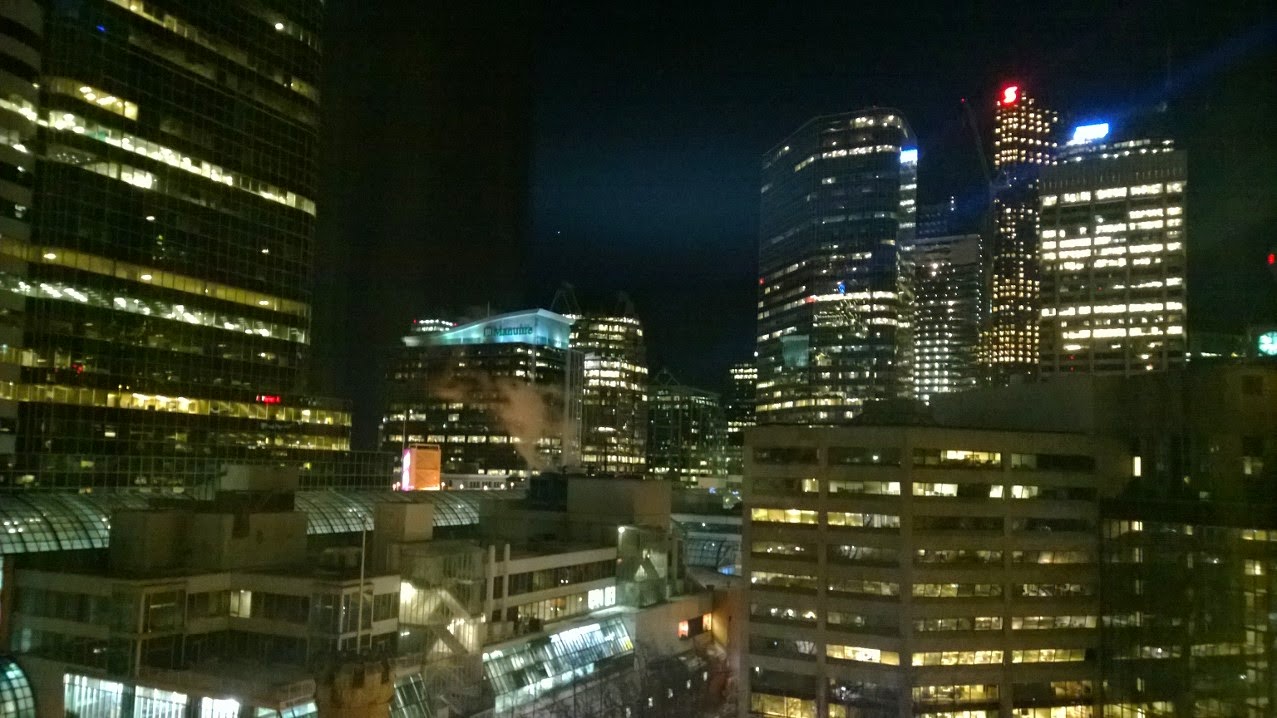 My original car didn’t come, and I had to call for another one, so I arrived at the airport 3 minutes past the 60 minute check in requirement, but Delta loves me and let me check in anyway. There was no way I was getting stuck in Canada… And off to LA and warmer weather.

And one more note, the exchange rate was pretty good this trip ($1.00 CAD to $1.12 USD) and I used my Delta Amex, which does not have foreign transaction fees. You probably have one card that doesn’t charge a foreign fee (usually Capital One doesn’t, either) and you want to remember to use that card.

And yes, I know Toronto is a huge metropolitan city and it has a lot of cool stuff to see and do (and yes, I’ve been here a few times and did some of the cool stuff), but in this case I just didn’t have the time or warm blood (it was cold!).