Like most Americans, I love a good Buffalo Chicken Wing. And since I was in Buffalo, I had to test out a few varieties to see which wing spot had the best wings in Buffalo. While most people would argue that Anchor Bar or Duff’s are the places to check out, we also heard that Dinosaur BBQ had some pretty good wings, so we tried out the wings there, too.

First up was Anchor Bar, which claims the Buffalo wing was created there in the 1960’s (though Anchor Bar has been there since 1935). Anchor Bar has a few locations and we, of course, went to the original location on Main Street.

The interior is interesting. It’s kind of dark and the walls are adorned with photographs of famous customers, license plates, and other knick-knacks. Motorcycles, bikes, tennis rackets and other random things hang from the ceiling. Also, random statues greet you both inside and outside. The tables are very casual with red vinyl table clothes and chairs covered in a similar material. 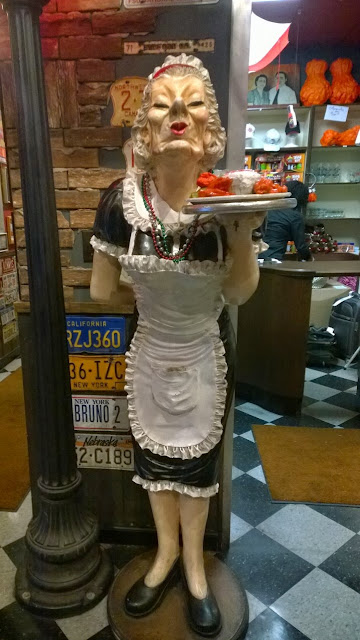 Before ordering wings, I ordered a side salad and the Spicy Hot Chicken Wing Soup. I didn’t know what to expect with the soup, but it was delicious. It wasn’t that spicy, but it was a perfectly filling comfort food. I’m not exactly sure of all of the ingredients, but the soup definitely had celery, garlic, onion in addition to the bits of spicy chicken. 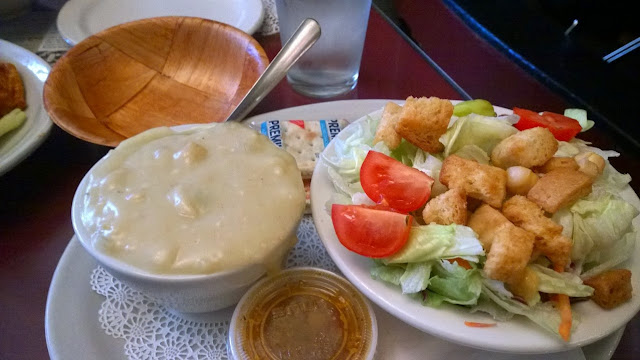 Next up was the wings. Ashley and I ordered an order of ten wings for $13 (you can order in 10, 20 or 50), medium spice, and all orders come with celery sticks and blue cheese. 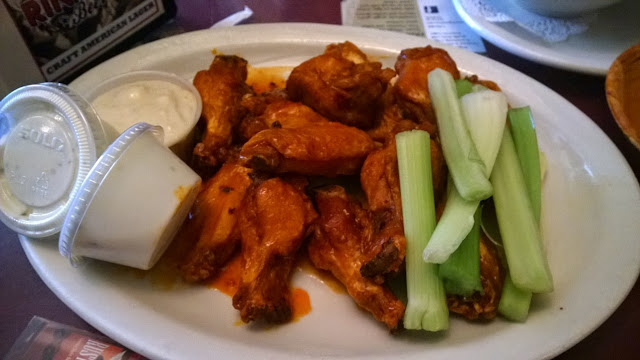 The wings were good, and the medium spice was a good spice (though, I could have done hot). They were cooked all the way through, but not dry and the wing had a nice crunch to it. The wings had a fair amount of sauce, without being too messy. The sauce was a little bit more on the vinegar side (which I love vinegar). All in all the wings were good and I’d have them again if I were in Buffalo.

After hitting Niagara Falls (see that post here), I let my stomach settle a little as I was headed out again to try another wing spot that is a contender for the best Buffalo wing.

Duff’s Famous Wings boasts they’ve been serving the famous Buffalo wing for 40+ years now. They have a few locations in the Buffalo area, and one in Texas, randomly. We went to the Duff’s on Sheridan in Amherst, which is the original location (and closest to our hotel). It was a cab ride away, and isn’t a place where you can easily hail a cab back, so we took our driver’s number. 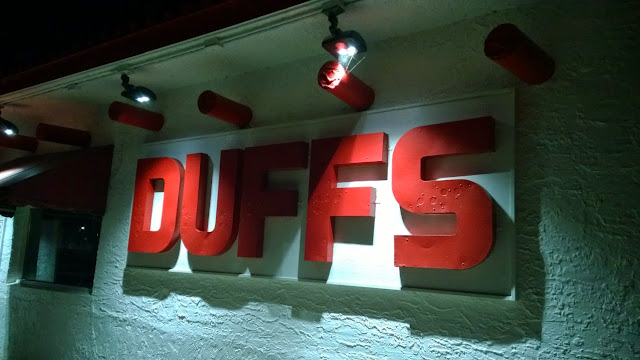 Upon walking into Duff’s, I felt like it was more of a bar restaurant, than a restaurant bar. The walls mostly had signs about the wing warning (I’ll get to that in a second), and the chairs and tables were black, casual and tablecloth less.
Duff’s has a warning for its patrons. Medium is hot, medium hot is very hot, hot is very very hot. Basically, order a spice down. 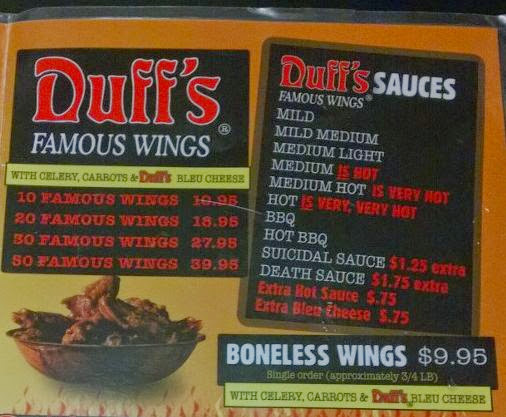 Beer always goes well with wings, but Duff’s didn’t have the best brew selection so I went with Duff’s brew (not to be confused with the fictitious Duff’s beer from The Simpson’s). Duff’s beer is brewed specifically for the wing chain and you can get it in a small plastic pitcher size, which of course I did. The beer isn’t spectacular but it paired well with the wings. 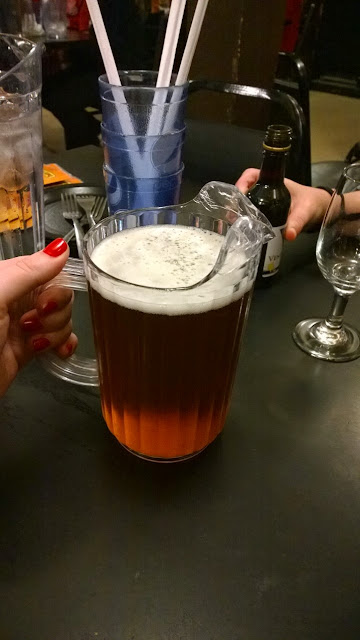 We ordered wings and salad. The food came out very quickly. 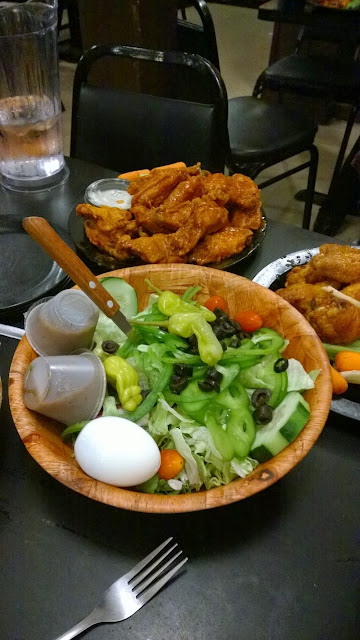 And for the wings… We ordered 20 medium wings (which is really hot?) for $18.95 and all orders come with a side of celery, carrots and blue cheese. Upon trying the wings, they were so not spicy enough. We ended up sending them back to get re-shaken with medium hot. When they came back they were much better.

Each wing was cooked to crispy perfection, and each wing had a lot of sauce. While it was messy, it was also really good. The sauce was very flavorful and the spices made my taste buds really happy. I also found out I tend to like the drums better than the wings, but really all of the pieces were really good. 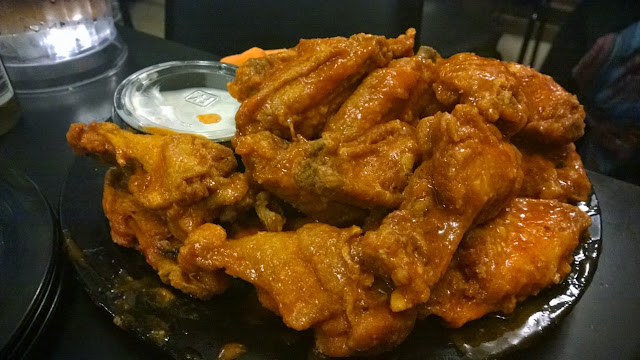 The next night for dinner (you can read more about Dinosaur dinner here) we went to Dinosaur Bar-B-Que. Since I had wings twice the day before, I had to order something other than chicken for dinner. So, I ordered a few wings on the side. The wings at Dinosaur were smoked first, then grilled with sauce. They are not traditional Buffalo wings by any means, but they were large, cooked to a crisp and really good. (The picture is pretty dark…) 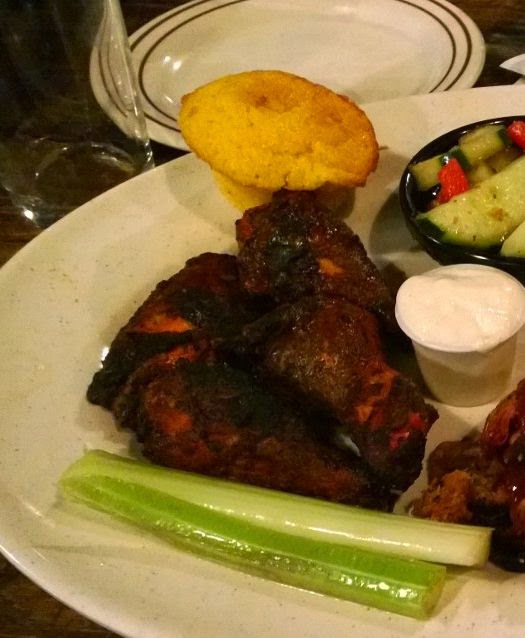 Bonus: The next morning we had early-ish flights back home, but there was an Anchor Bar at the airport, so we got breakfast and, surprise, wings. 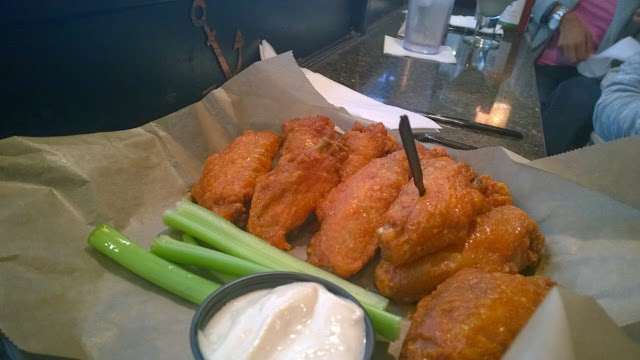 Surprisingly, the airport Anchor Bar wings were the same taste and quality as the restaurant (you never know with airport food).

So, the question is, which establishment had the best Buffalo wings? For me, it was Duff’s hands down.

Duff’s sauce was more flavorful, the wings were a bit more crispy, and they served the wings with carrots (which totally cool your mouth down). Anchor Bar was still cool and a great tourist destination, and definitely deserves to be checked out, but if you’re solely looking for the best Buffalo wings, Duff’s is your spot.

Do you agree, or was there a Buffalo wings spot that I missed? If so, leave me a comment or send me a Tweet and let me know.