After a quick flight from LGA, I landed in CLT. The airport (or at least the Delta terminal, does it have two terminals?) was smaller and it was easy to get to baggage claim and quickly claim my bag. Sadly, I did have to board a bus to the National rental counter (I loathe shuttle buses) but even that was quite quick.

Because my flight to LGA was late, I arrived in the midst of rush hour. I had to chuckle as I’m sitting in a dead stop in traffic, I look over to see a sign that says, “North Carolina, A Nice State for a Drive,” or something to that effect. I’m sure North Carolina is beautiful for driving, but I was in a hurry to get to my hotel and rest for a minute.

I was staying in the South Park area, because we had a store opening at SouthPark mall. It’s a nice area, but definitely suburbs. I stayed at the Renaissance Charlotte South Park, which I would highly recommend if you’re in that area. Two quick cons – they do not take credit card authorizations from your employer and they will not cook your burger less than medium well. Other than that, the hotel was fantastic. The staff was probably the friendliest I’ve ever encountered. Quick shout out to Danny, our valet/bellman. He’s amazing!

The hotel itself was located near the mall (walking distance), had a decent restaurant and bar, a beautiful courtyard with custom firepits, and spinning top chairs!!! 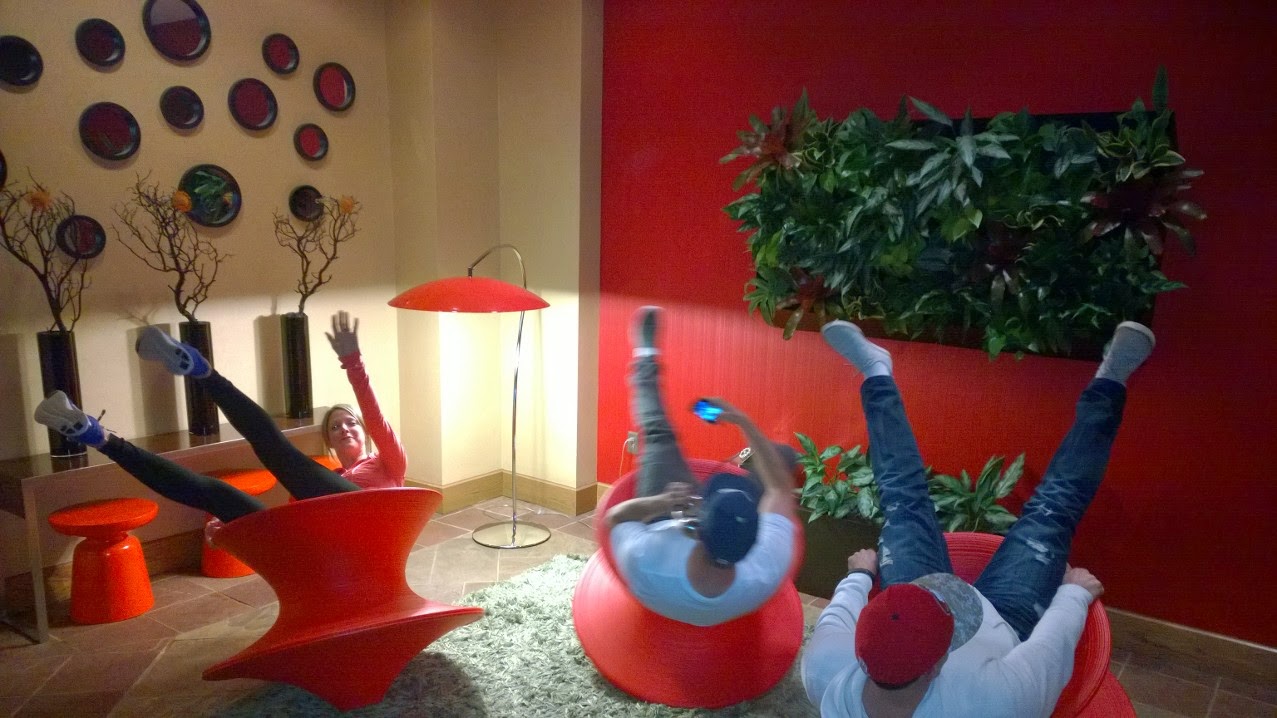 My first night there I settled in with my laptop before going down to the courtyard for a quick hello drink with my co-workers. Then back upstairs to do a bit more work and ended up ordering room service. Nothing too exciting.
The next day was meetings and prep, so I spent much of my day at the mall. SouthPark mall is awesome (and I know my malls). It’s not too terribly huge, but big enough and has all the high end retail shops. This is a big statement, but it may be one of my favorite malls… They even had a Tory Burch store where I happened to snag the last of the Tory Burch Brass Fit Bit bracelets. Yeah, I treated myself. 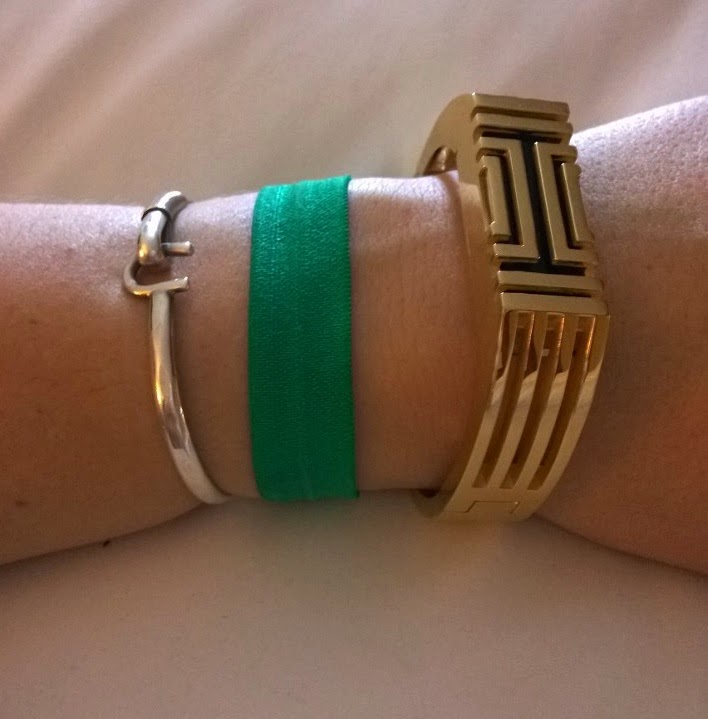 On Friday for lunch, my coworker and I went to McCormick and Schmick’s (hey, we’re in a mall… chain food is our only fuel). It was actually really good. I ordered local oysters and seared scallops and then we split the bacon wrapped stuffed shrimp. Amazing. 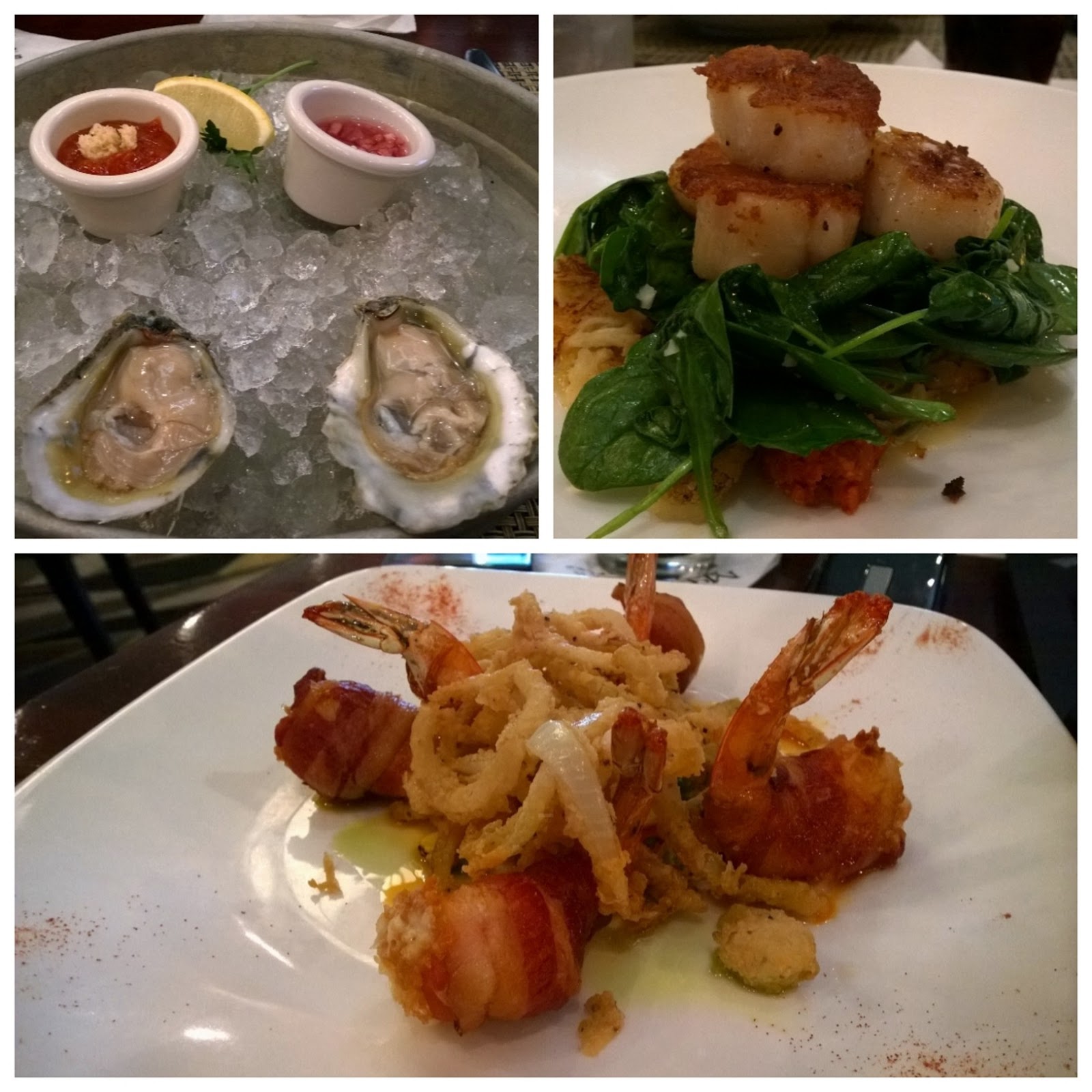 That night I needed a lot of sleep as I had a 7:15 a.m. call time the next day. The store opening without a hitch and we welcomed our newest store to Charlotte.
After the festivities died down, we went to a lunch with some of our team members. Treehouse Whiskey and Fork was right across the street from the mall, so we ventured over.
This place had a big tree in the middle of the room, as well as a lot of trees elsewhere. It’s a total barbecue Southern place, and was good for our larger group. A few of us split the Treehouse Platter for Four. It was totally epic and worth the price. The bbq was good enough (hey, it is suburbs and mall food, afterall) and the platter fed four hungry co-workers quite well. 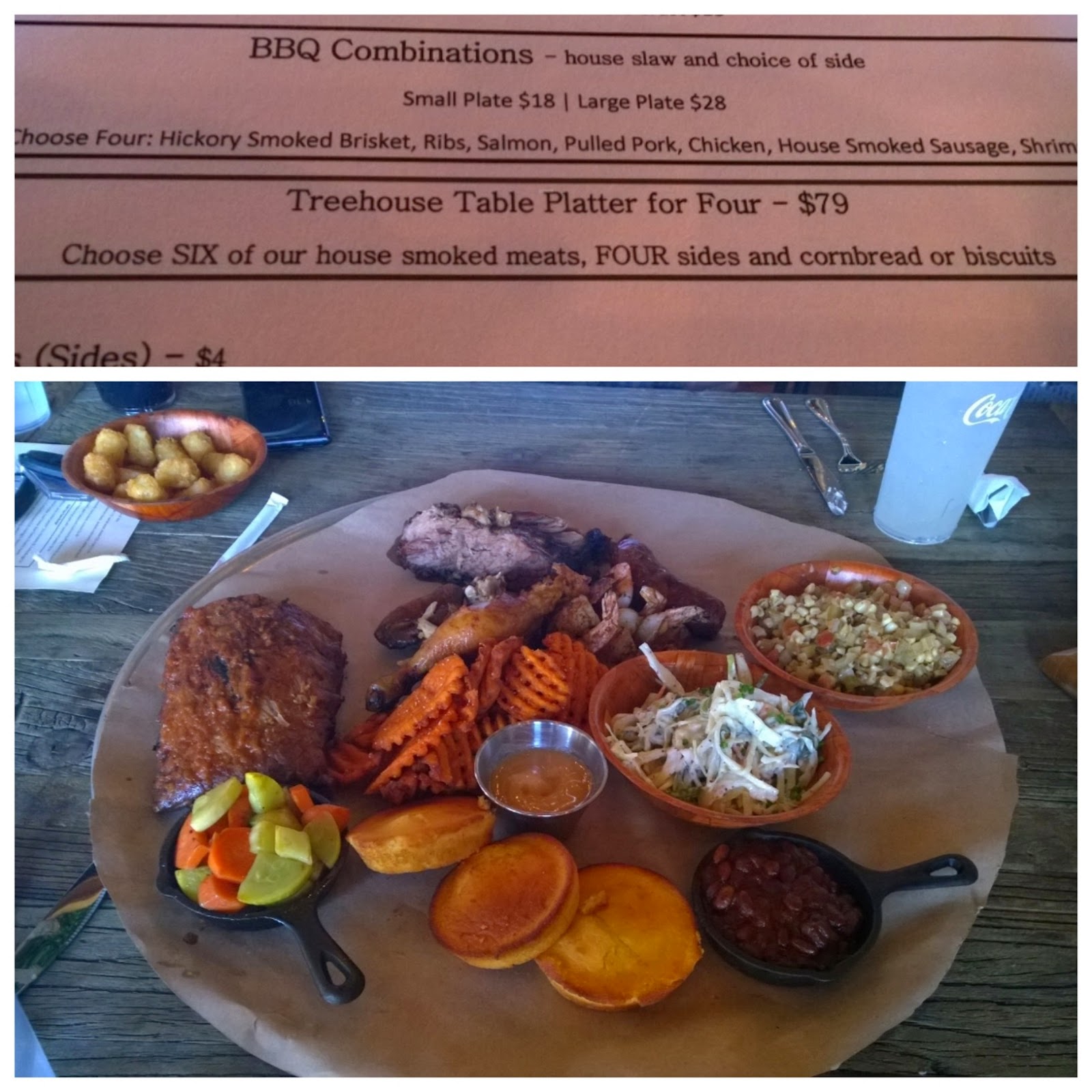 I do have to make a quick side note – the restroom at Treehouse was super weird. It had a toilet next to the sink, then sort of a doorless stall next to that. Maybe if you’re just the type to say, “Screw it, I have to pee,” it’s for you, but I found it quite odd. Don’t worry, I took a pic. 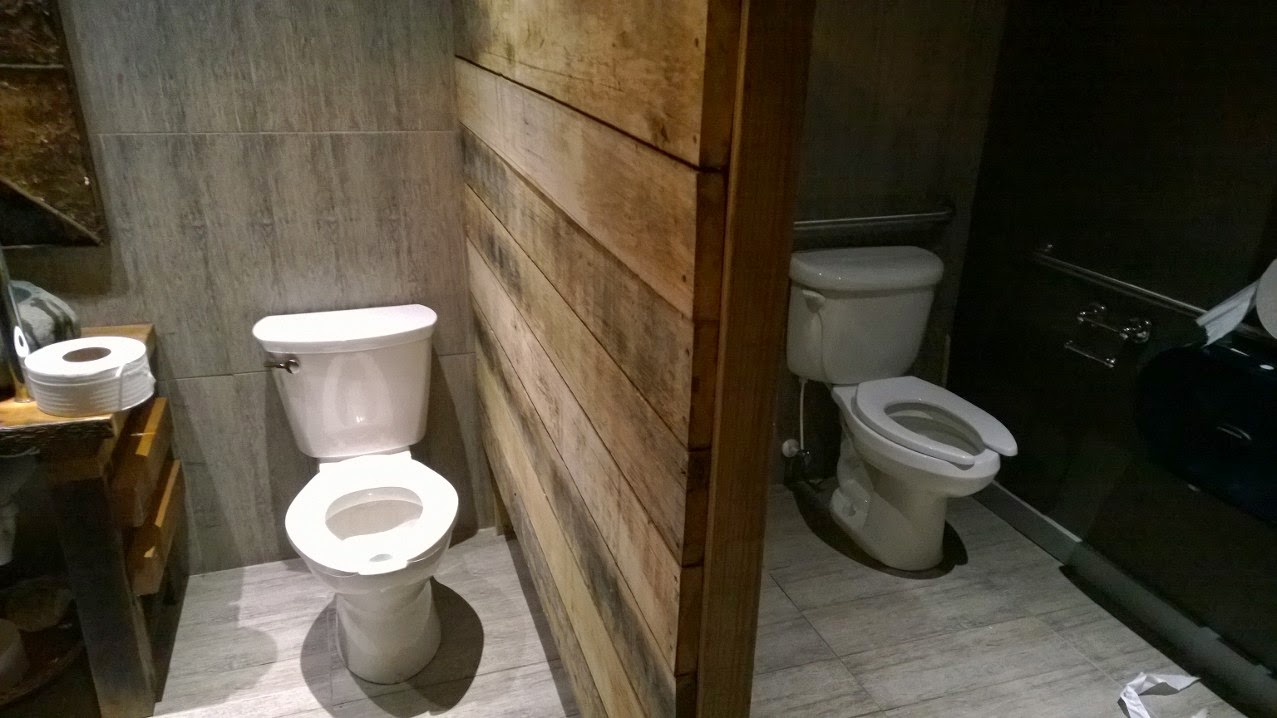 I had to take a nap, because napping is amazing. I woke up later and met my co-workers for my bday dinner. Usually I am the type to go out and about in the city and explore, but this night I needed to stay near the hotel. I suggested, in honor of my bday, we go to the hotel for dinner while wearing yoga pants. I’m pretty sure my co-workers were pretty excited that this was my decision.
We did some drinks and food at the hotel, then a few of us went across the street to City Tavern. (We were still in yoga pants.) We heard that cougars like to hang out here on Friday nights, but sadly this was a Saturday night and it was fairly empty (I mean, who doesn’t like a cougar, right??). They did have $3 Mimosa on special, so that was obviously our drink of choice. Wings were ordered, and they were actually pretty good, too.
I’m one of the few single girls in my co-worker travel group, so the girls like to “play Tinder” on my phone. Quick back story, two of my co-workers got me on it when we were in Durham, NC in August, and I was only matching with crew guys… so that’s weird. I even thought about meeting someone interesting and perhaps going on a date with them. Who knows, maybe I can charm them with some pure instinct pheromone oil or simply by talking to them. But my friends like to swipe left and right and see what’s out there – for me. The funny thing, on Saturday night I kept waking up to the new message alert on Tinder, as I forgot to silence my phone. Even funnier, I didn’t respond to messages on Tinder and dudes get super weird and then started writing messages asking why I am not responding. Oh, silly dating apps!
The next day (Sunday, October 19) was concert day! The stage was at Symphony Park and it’s built on this weird man made lake, with no fishing – because I’m sure you’d want to fish there. This was Kelly Clarkson’s first concert since having her baby, and maybe her first concert in about a year. I only have the nicest things to say about Kelly Clarkson, as she is the nicest celebrity I’ve ever met and she is so amazing to her fans. Also, she is quite hysterical and has a great sense of humor. 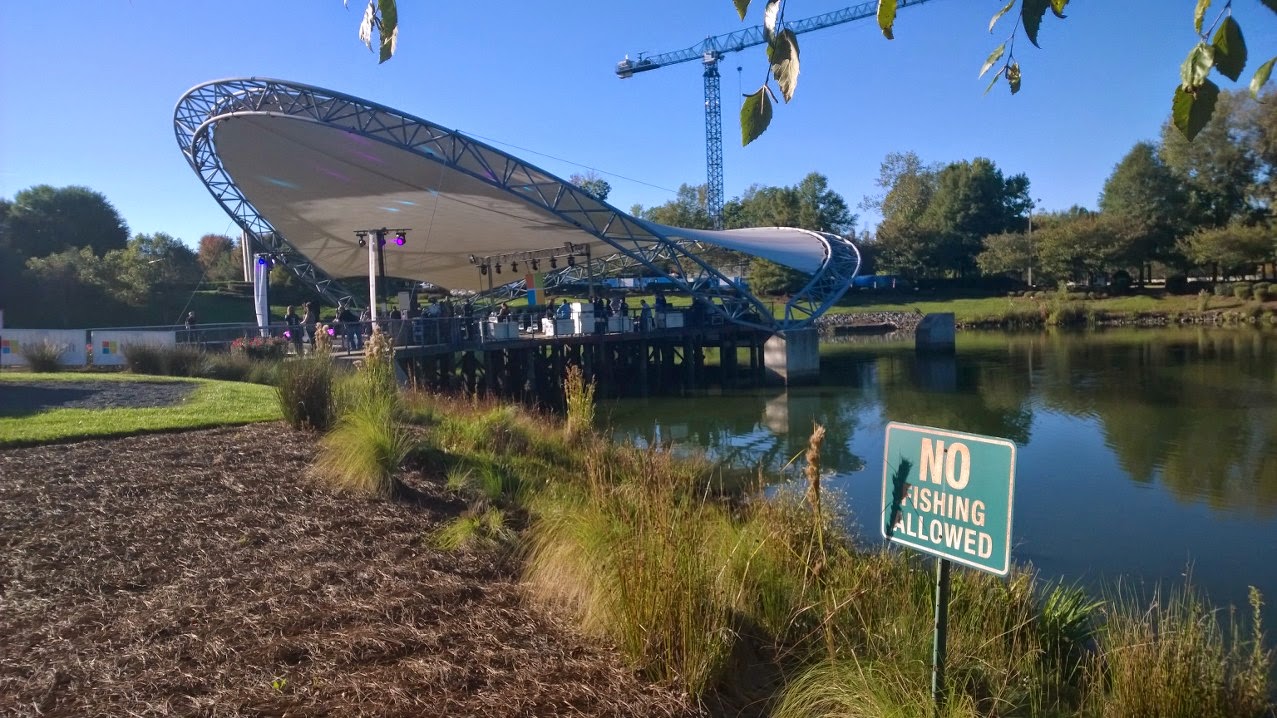 After the concert, a few of us went around the corner to Village Tavern. It’s near the hotel, in an office building, and totally a chain. The food was great. I ordered steak (which is often what I order on the last night of a trip) and some sides. Charlotte is southern enough that they have the good southern sides. They also had a surprisingly good beer list. 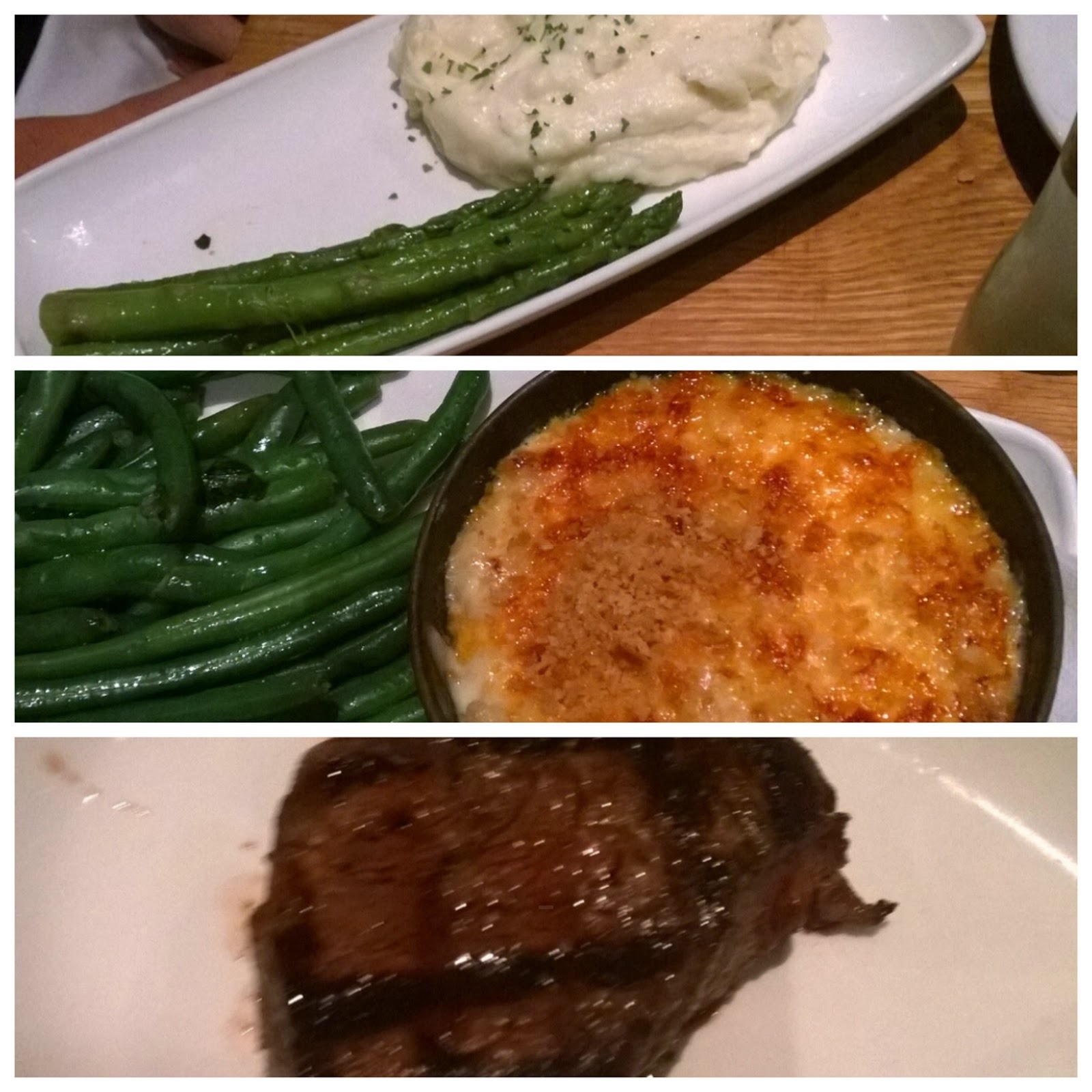 After dinner, I went upstairs to unwind for a few minutes (sometimes my semi-introverted self just needs some alone time). Then went back to hang with co-workers for a bit. It’s funny I refer to these people as co-workers, when in reality sometimes they are more friends. We often see one another more than we see anyone else, and we’re this cute little travel family… In any event, we hung out for a bit.
Then one of my co-workers and I decided we should do one more thing that isn’t in our hotel, so we walked a few blocks to a beer bar called T. MAC. They had a ton of different beers on tap, but it seemed like the first 3 or 4 I requested were not available. This is another chain limited to NC, GA and TN. While the place was huge, we were the only two in here on a Sunday night. The place does feature taps on the tables where you can serve yourself (controlled with an iPad to measure ordering). 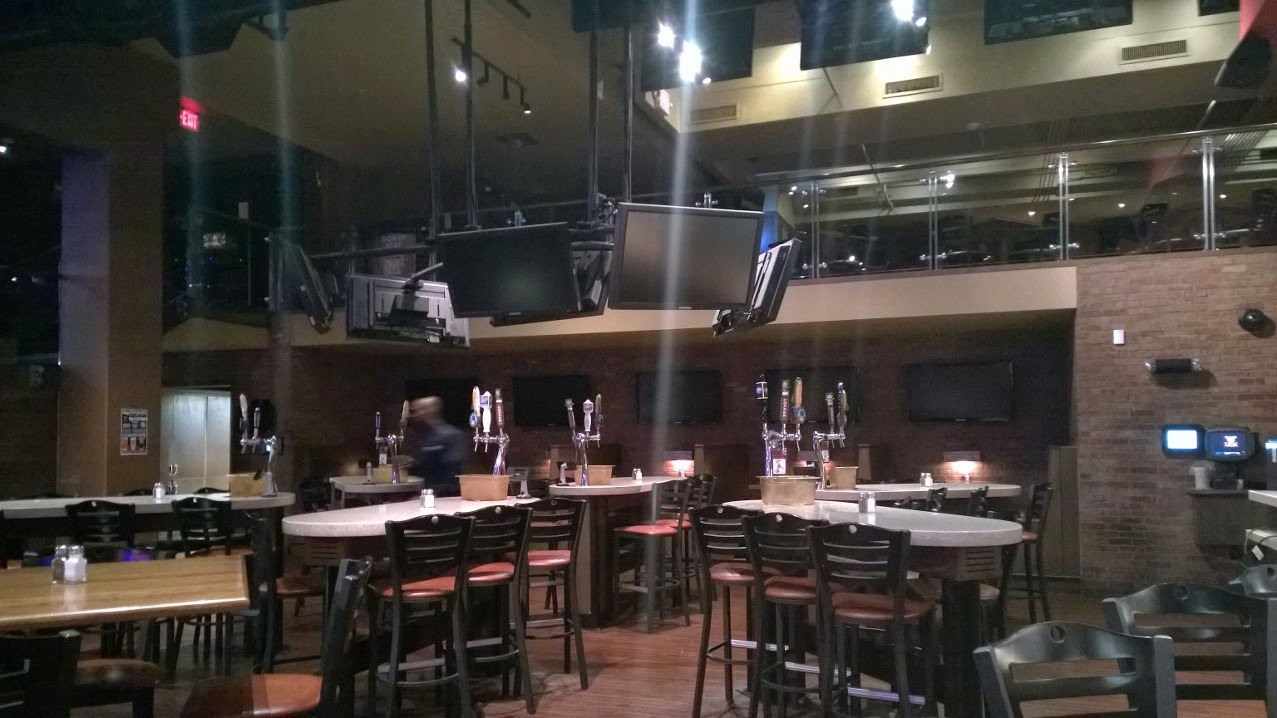 The next morning, I awoke early to head to the airport for DTW then PVD to celebrate my birthday week in New England.
While I didn’t get a chance to head downtown (and I hear Charlotte is fabulous), I definitely want to come back and check out all the city has to offer.
And now, it’s on to the next…