“And If I Die in Raleigh, At Least I Will Die Free…”

Well, that’s what Old Crow Medicine Show thought when they wrote that song in 2006, about six years before the republicans took over what was a moderate state, and ten years before HB2. More on that in a bit…

These past few weeks have been overwhelming, to say the least, with my emotions ranging from excitement to pure terror and everything in between, mixed with many tears – both happy and sad. I’ve lived in Seattle, specifically Belltown, for almost nine years. I left Detroit as a wide-eyed 25-year-old, in search of a better job and maybe a new and exciting adventure. I never thought I’d stay here (especially in the same apartment) for nine years, but it really is the best neighborhood in Seattle. I am going to miss Belltown (cue tears), and being a part of this amazing community.

I remember first moving here, reading about the Seattle Freeze, and worrying I wouldn’t make friends. I found the exact opposite is true. I have met some of the best people I will ever know here, in Seattle. I have a family, I mean really, these friends are my family. And… I met Chad here.

So much has changed since I moved here in 2007, but I’ve seen the greatest changes in the last year. I’m not saying it’s all bad, cities change, evolve, grow. It’s part of the process. But the timing, right now, it just feels like a good time for a personal change, too. 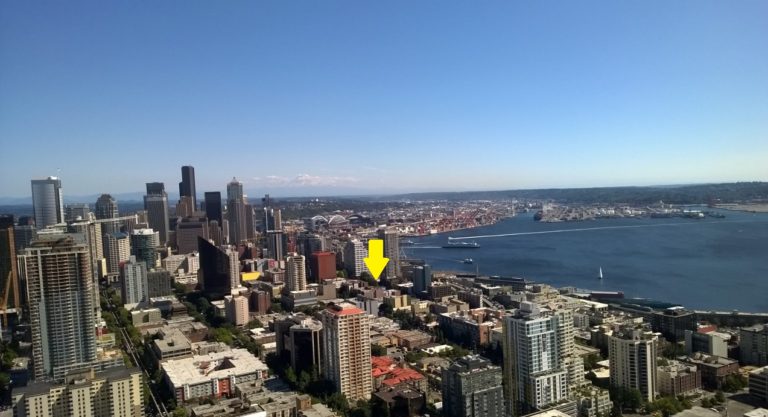 Belltown and our apartment from the Space Needle

By now you’re probably thinking… just get to it, right? 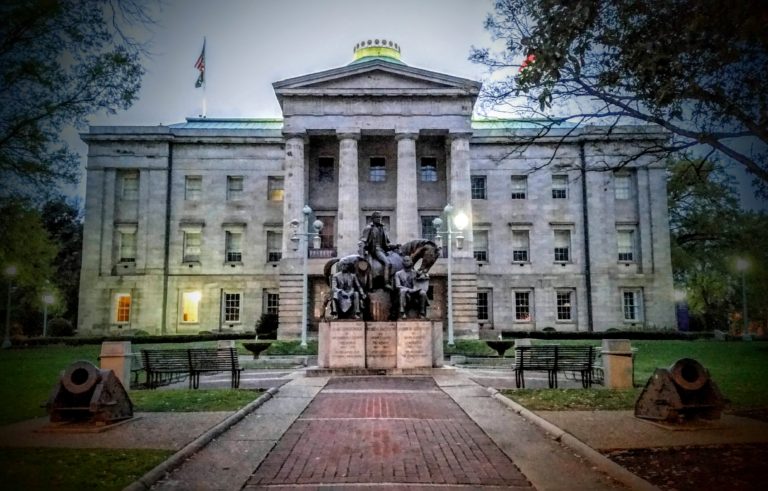 This is not a decision Chad and I made lightly. Like many Seattleites, we were looking to purchase our first home and found we kept getting priced out of homes the size of cereal boxes, located in crappy neighborhoods, that needed $50K in updates before you can even move in. (Yes, we are aware that we could move to the burbs, but that isn’t the lifestyle we envision for ourselves.) They say Seattle is the new San Francisco, and we’re feeling it.

After repeatedly not finding a home, we started thinking outside the box a bit and haphazardly looking at real estate in other cities. Detroit? Austin? Nashville? Greenville, SC? Charlotte? Raleigh? We were open to everything because we were “just looking.” We’d looked into apartments in Charlotte NC online and saw some really attractive properties that we could see ourselves living in, but we were still “just looking.” And then, somehow, our just looking turned more and more into, “Look at this house in Raleigh. Should we move to Raleigh?” And then Chad had an opportunity at work that we could not pass up… and that led us to Raleigh.

Why Raleigh (or possibly Durham, we’ll see where we end up buying)? Raleigh is a smaller city, with a population of about 430,000 (with nearby Durham at about 250,000). It’s still affordable, there are good jobs, the weather is nice, it’s far enough away from the ocean to avoid hurricanes, it’s liberal (yep, there are liberals in North Carolina!), and Chad’s sister and her family live in nearby Charlotte.

And, finally, the reason that really solidified this move for us: Uncle Chad missed his niece, Finley.

We don’t really know all of the details quite yet, as we’re just figuring out a few things ourselves. But here’s what we do know… Chad will most likely be moving in Mid-June, as his new role at Southwest Airlines will start in June sometime. I’ll stick around for a bit longer (probably through July) to wrap some things up at home and work (I’ll still be working for my current company, just remotely, and I am so thankful my company is on board with this move) and to sort out things like the Moving Company and a few more bits and pieces to hopefully make the moving process a little easier. The guys at work said I should rent moving crates online as apparently they make packing really easy and are more protective than cardboard boxes, which makes sense. There’s going to be so much to do!

So, here’s where we need your help…

And some thoughts on North Carolina’s current political policies…

It was actually on our flight from RDU to SEA (after checking out the area) that the state of NC convened a special session (costing taxpayers $42,000), and passed the hateful Anti-LGBT bill, HB2, through the House, the Senate, and finally signed by Gov. Pat McCrory.

Currently, as I write this, the NC government is facing losing federal funding by the Obama administration (side note: the Department of Justice says that HB2 violates the Civil Rights Act and Title IX in schools) unless NC declares the HB2 law will not be enforced. The NC government is risking losing about five billion dollars in federal funding. Yes, billion. Not to mention what it has already cost the state in canceled tourist revenue, companies moving offices, and who knows what else.

Some people may now know that HB2 wasn’t just about bathrooms. In fact, it was mostly about taking away the rights of local governments. The bill also does not allow a city to increase minimum wage past the state’s minimum wage. North Carolina’s minimum wage is $7.25, by the way. So, cities like Charlotte, where the cost of living is more expensive than some of NC’s smaller towns, cannot increase the city’s minimum wage past $7.25.

North Carolina has one of the worst abortion laws in the country. If you need to have an abortion after 16 weeks (they say 20, but the state uses “conservative math” and starts counting at your last period, not actual conception), well, you have to submit your sonogram to the Department of Health and Human Services, to politicians, who are not medical doctors, so they can measure the fetus (which isn’t an exact science anyway). For real. Creepy, right? Also, I see some HIPPA lawsuits in the near future.

And, did I mention weed is still illegal and in some places still punishable with jail time (and fines, and lawyer fees, and a record, etc.)? Millions of dollars per year are spent on the war against cannabis in NC, while we’re over here in Seattle paying taxes on it, when such products in other states would be illegal to possess, enjoying our freedom, and the State of Washington is just cashing checks left and right. (WA State received $67.5 million in revenue during the first year of legalization.)

Yeah, this (and a whole slew of other issues I haven’t even mentioned) is what we are getting ourselves into. We’re moving to the South and inheriting all that comes with it.

But, we have voices and we have plans. We’re going to get involved, and don’t be surprised if you see Chad “Bringing California values to the South” by running for something in the near future, just as soon as we figure out a new campaign slogan for him.

So, yeah, that’s our news. It’s crazy and I’m excited and I’m terrified.

North Carolina is going to be an awesome new adventure for us – and despite all of the above, N.C. is an absolutely beautiful state with wonderful people. It’s true what the say about Southern Hospitality; we felt it with everyone we met in the week we visited last March. And, we can afford a big house with a lot of rooms – so please come and visit us!

And, if I get arrested for using the men’s room because the women’s line is too long, please consider donating to my GoFundMe bail campaign. 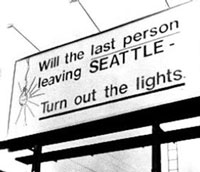 One of our favorite Harvest Hosts yet! @serdabrewi

I'm stepping up my #YouTube game a bit. Still shy

Southern Comfort RV Park is a solid, no frills RV

We finally went to our first @whataburger and oh m

Biloxi, Mississippi was an unplanned stop - but so

What's your fave RV decor style? Our RV decor is