Well, first, I decided to go to Australia sometime last month. I just kind of decided. Then, somehow, my trip turned into a three week tour of Australia and New Zealand. I bought my tickets on January 16th, and here I am today.

I also decided not to check bags. While I can check three bags for free on Delta flights, I am flying many Virgin Australia flights where I cannot check bags for free (even though they code share with Delta). Since most checked baggage fess on Virgin are $65 AUD, and I’m taking 5 flights, I decided to spend that money elsewhere, on something I’ve wanted forever, the Tom Bihn Aeronaut 45.

So, yes, I managed to pack for three weeks (granted, in a summer destination) in the Tom Bihn Aeronaut 45 and the Tom Bihn Pilot bag. It is kind of amazing. (I actually went to the Tom Bihn store in Seattle, where they were super helpful and helped me pick out packing cubes and other goodies to make this possible.) 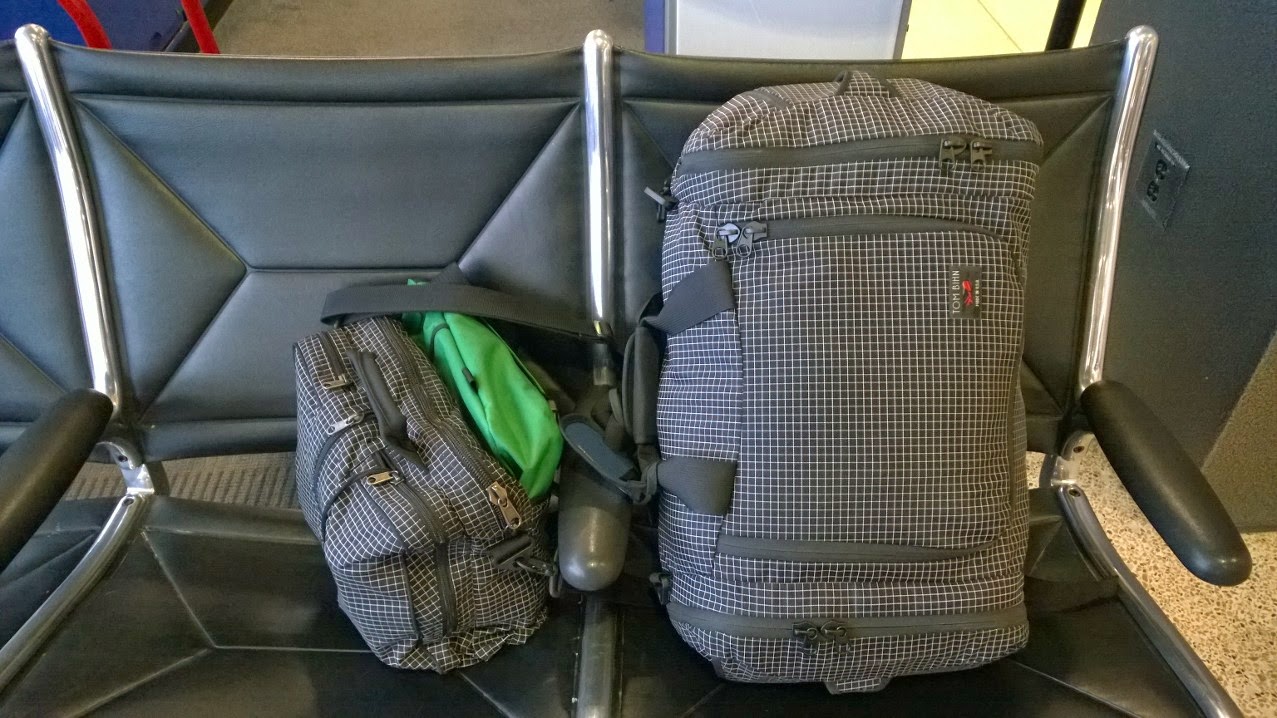 I board my flight from Seattle to LAX and all is well (even was upgraded to first class). I got fed, too, which was good. Delta is serving the Luvo sandwiches and salads, and I have to tell you, I’m a fan. I had the chicken salad wrap (it has Greek yogurt dressing instead of mayo – yay!) with a side of hummous and veggies. The Luvo meals are served with a tea bag, which I totally don’t get, but sometimes I save the teabag and the green tea is actually pretty good. 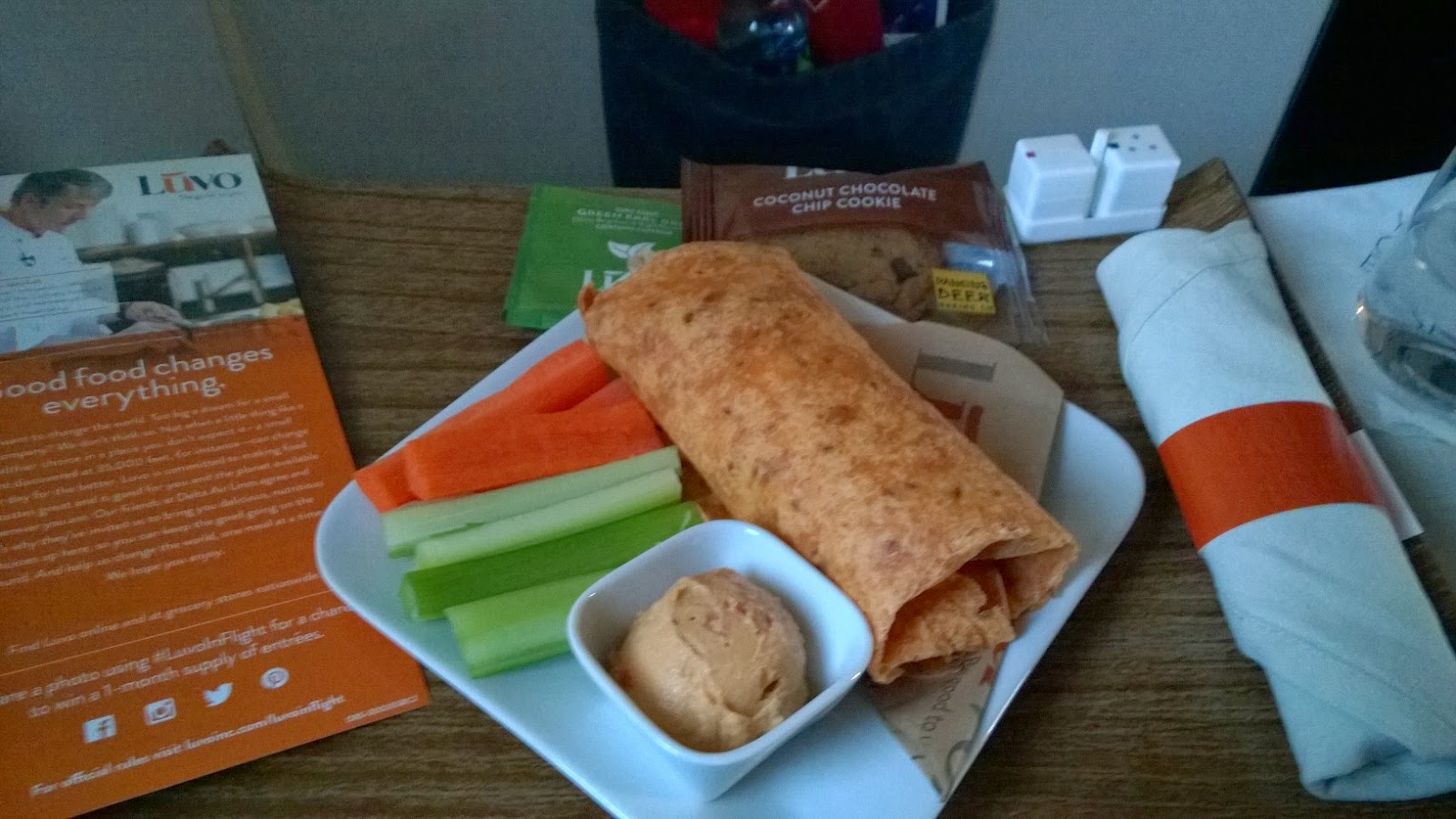 And of course, our beautiful Mount Rainier was a bit more cloudy than usual, but still, I can’t help but be so amazed every time we fly over. 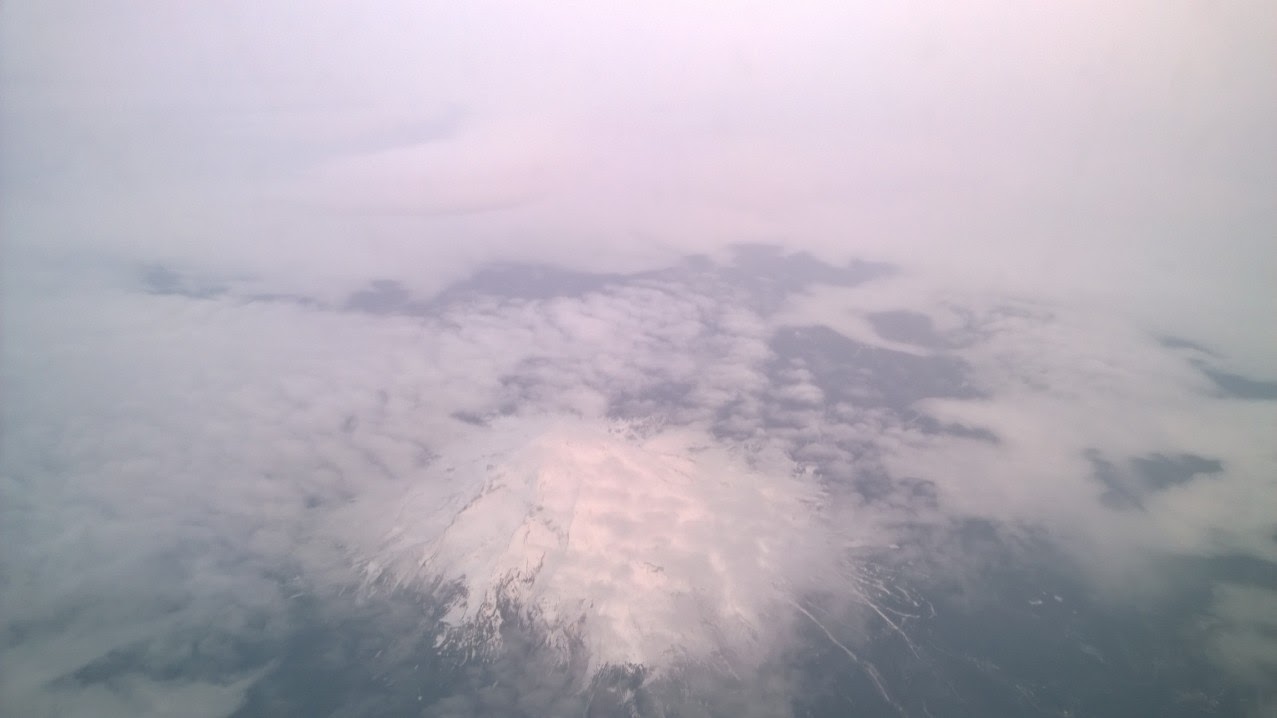 I soon boarded Virgin Australia flight, VA2, which is a 14 hour flight and I’ll completely miss February 5th (as I take off at 9:50 p.m. on February 4, 2015 and land at 7:00 a.m. February 6, 2015). I and was able to board early because of my Delta status. I was in economy, but surprisingly the seats were pretty comfortable. Plus, Virgin has the Red entertainment system with a ton of movies, TV shows, and even chat rooms (with other passengers).

About 90 minutes into our flight, dinner was served. I never pre-order my meals (I know you get them sooner), but it’s because I’m terrified there will be mushrooms (I’m allergic) and I need choices.

For my first meal, I chose the Spanish chicken and tabouli. It was served with a salad, and chocolate mousse, cheddar cheese, and a roll. It was… well, I ate the chicken, green beans, tabouli, and the cheese. I left the rest. 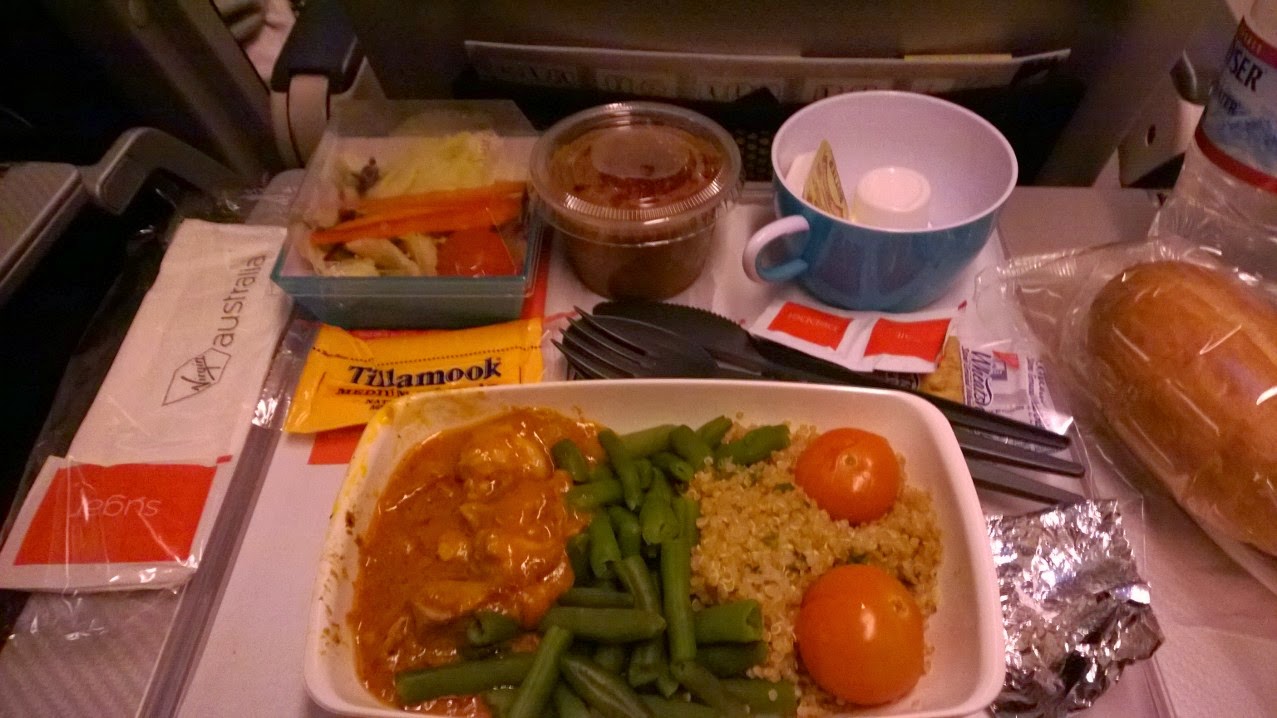 After dinner, I started watching This is Where I Leave You. It was actually a pretty good movie, however, with the strength of the cast I kind of expected a bit more. I’d still totally recommend it. Once it ended, I got comfortable and fell asleep – in a pretty deep sleep actually.

About four hours into my fourteen-hour flight, I abruptly woke up because all the lights went on, alarms were going off, and the masks dropped from the ceiling. A deep male voice with an Australian accent was telling us that the airplane has lost cabin pressure and the captain was going to take us to a safe altitude. I panicked. I put on a mask, but my hands were shaking so much I couldn’t manage to get it around my head, just on my face. I finally got it around and then I looked at the person next to me (who ended up being Christeen!) and I think I said something like can you hold my hand, but maybe I didn’t even say anything and we just held hands. And I remember looking at him and I knew water was coming to my eyes and I remember him squeezing my hand tighter. The whole ordeal lasted about two minutes.

It was odd. There was no chaos. It was silent and calm. I silently apologized to my mother for the pain she may endure, hoping she would receive my telepathic messages. I kicked myself for not spending the extra $10 for the $100,000 travel life insurance policy instead of just the $40,000.  I also was pissed because of course this happens on a vacation and not a work trip (where my mom, dad, and sister would bank from the life insurance policy). I also took my cell phone out of airplane mode – just in case it had a signal.

I remember from my past life at Northwest Airlines that a plane needs to be under 10,000 feet, and the oxygen only lasts for like ten to fifteen minutes. And I knew we were in the middle of the Pacific Ocean. But we were not descending, which I found was weird, too. I was trying to devise a plan like – maybe I should grab my ID and put it on me so it would be easier to identify my body. Should I put my shoes back on?

Finally, I was just thinking, “Gosh, this is really happening.”

And then, about 90 seconds into my ordeal, I was just sort of OK with whatever was going to happen next.

Then, the alarms stopped. A very pleasant female Australian accent came over the PA and announced that everything was alright, and there was nothing wrong with the plane and the masks had malfunctioned. I remember taking off my mask and thinking, “Are you kidding me?” But I was obviously very relieved. Also, now that I even think about it, was oxygen even flowing? Obviously, if this had turned out to be a real situation it could have gone badly wrong, and I potentially could have ended up with a serious injury that may have led to an extreme case of disability of some sort. After this whole ordeal, I decided to research more into disability insurance and claims. Companies similar to Curo Financial and other insurance claims providers might be a suitable option, after the fact, or you could always protect yourself beforehand if that was more desirable!

And then I took an obligatory airline mask selfie. 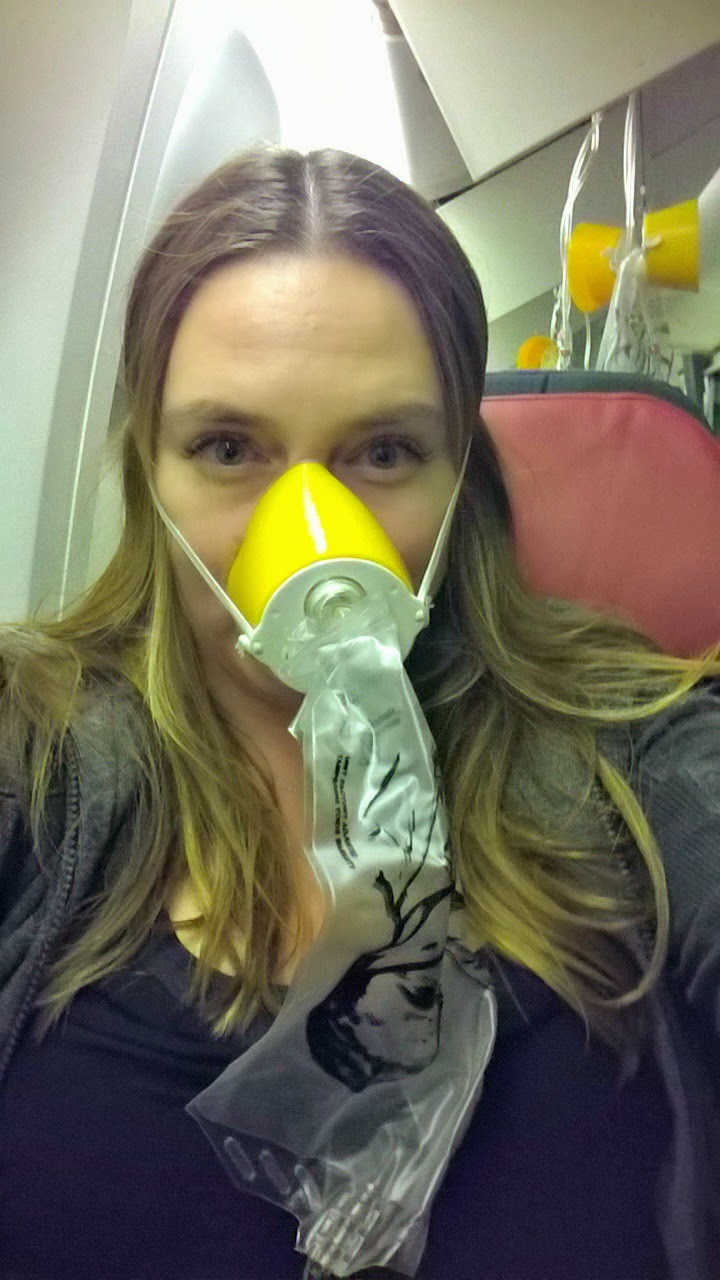 Also, my new found hand holding friend is a NSFW drag performance artist and that’s just amazing in itself. Check out Christeene Vale (but remember, very NSFW).
So, we still had about 10 hours to go on this flight. After sometime, I finally fell asleep again. My entertainment system stopped working after the mask drop, so I watched some episodes of The League on my tablet, then listened to podcasts until I fell asleep again. Then, of course, in my dream we kept having air emergencies, so that didn’t work out so well. I got up and walked and stretched a bit, too. Plus, my water bottle needed another filling – and I noticed they put out pop and chips at the water stations, too.
You might wonder what happened to the masks? About an hour or two later, someone came by to wrap them up and stuff them back up into the panels. Hopefully the clean them, but then again, germs were the last thing on my mind when that happened.
I read, slept on an off, my entertainment center worked again so I watched random TV (Modern Family, Mom, etc.) and then I checked to see if the sun was rising – and it was! I’m not sure why that made me feel better, but it did. 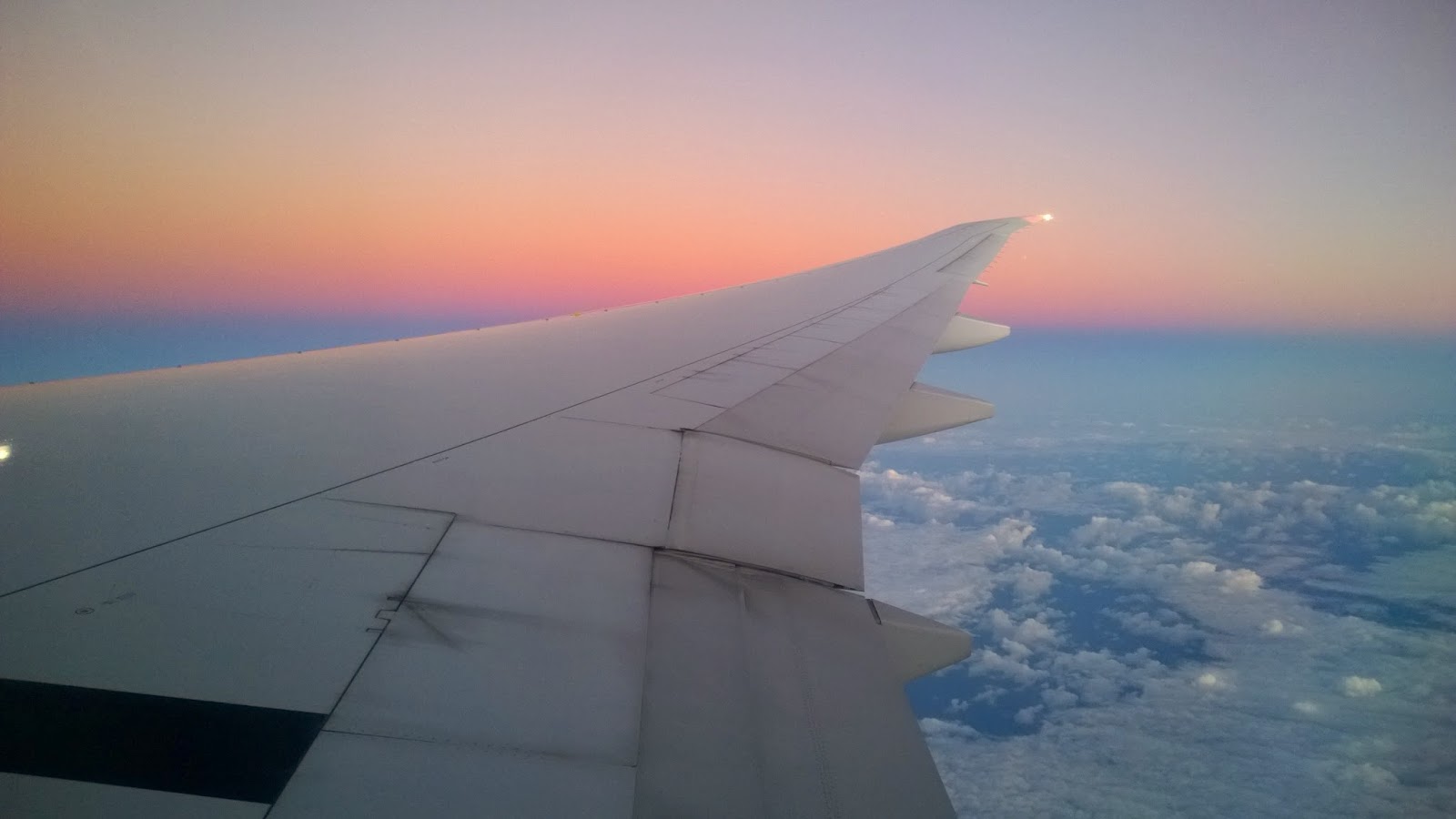 We were about 2.5 hours from Sydney at this point, and breakfast was being served. I think there were two choices at one point, but then by the time I was served all that was left was a cheese omelet with a side of bacon, hash browns and maybe spinach and tomato? 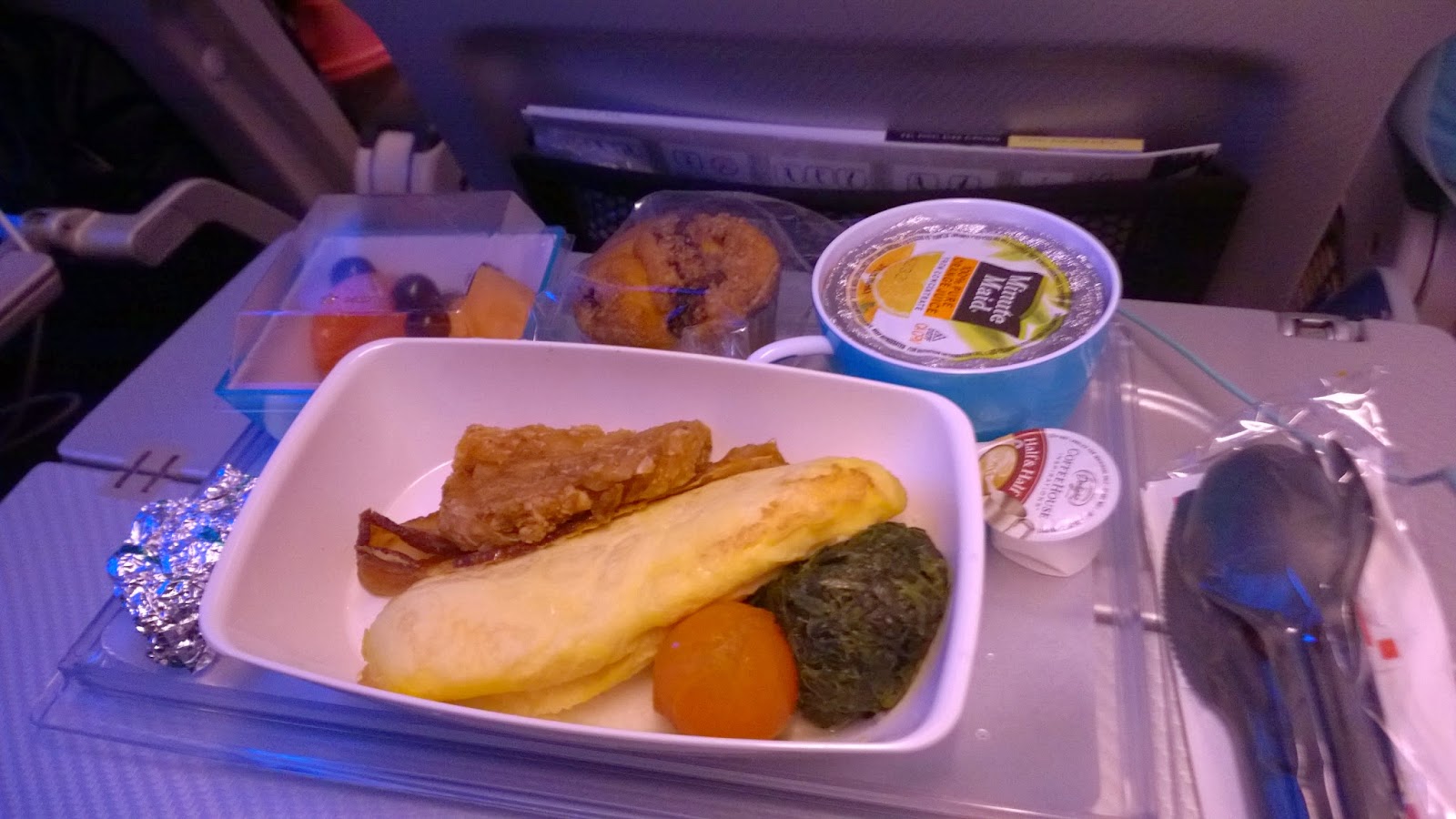 he omelet tasted like rubber, I didn’t dare touch the bacon, the hash brown was edible and I was very thankful for the fruit. I also saved the muffin for later.

I was wide awake and had time for another movie, so I watched The Skeleton Twins. Not what I expected, super dark, but heart warming.

And then we landed. And I was so happy to be off this plane. Customs took awhile, but they didn’t even ask me any questions. Just looked at my docs and said, “OK, mate.”

I hugged my hand holding seatmate goodbye, and thanked him again for holding my hand. Then it was off to find a SIM card so I could post my airplane mask selfie immediately. Luckily, as soon as exit baggage claim, there is a Vodafone (and other providers, too) kiosk right there. I snagged 3 GB plus unlimited calls to the US, and free data weekends for $40. It took a minute to work in my Nokia Lumia Icon, because apparently you will need to download Nokia Access Point to make your Microsoft Nokia Lumia phone work with an other country’s SIM card. I found this out by googling it, the Vodafone people had no clue.

As soon as I had a SIM I called my mom and one other friend, messaged a few people on What’s App, and of course posted my selfie. Then hopped in a cab to my first lodging spot in Bondi Beach (which I’ll update when I’m not staying here anymore) and proceeded to wash my face, brush my teeth and take a long four hour nap.

And while my mask situation was nowhere near a near-death experience (even talking about it in so much depth seems dramatic, as I was never in danger), it did make me realize a few things and I’m going to make sure to get the most out of my next three weeks, without fear.

And I can’t wait for the rest of my adventures.