This is my second trip to Syracuse for work, again I was there for an event at Destiny USA. I had a great time on my first trip to Syracuse in November, but I didn’t have a ton of time to enjoy all the the gems that the city offers because I had to rush to Phoenix. However, this trip I did schedule a 6: 00 a.m. on Sunday (I didn’t want to get trapped in the snowstorm that was for sure coming), so again I only had 39 hours. Despite the short amount of time, I was determined to find more cool stuff to experience in this town.
So, I went to Reddit and asked local Redditors what was the do not miss in Syracuse. As usual, Reddit did not disappoint.
Flying to Syracuse from Seattle in January is always tricky I decided to take a 6:00 a.m. out of Seattle, through Detroit, on Delta (of course).
Michigan was obviously snowy. (Also, whenever I land in Detroit I get a small pang of sadness because I want to visit my favorite city.) 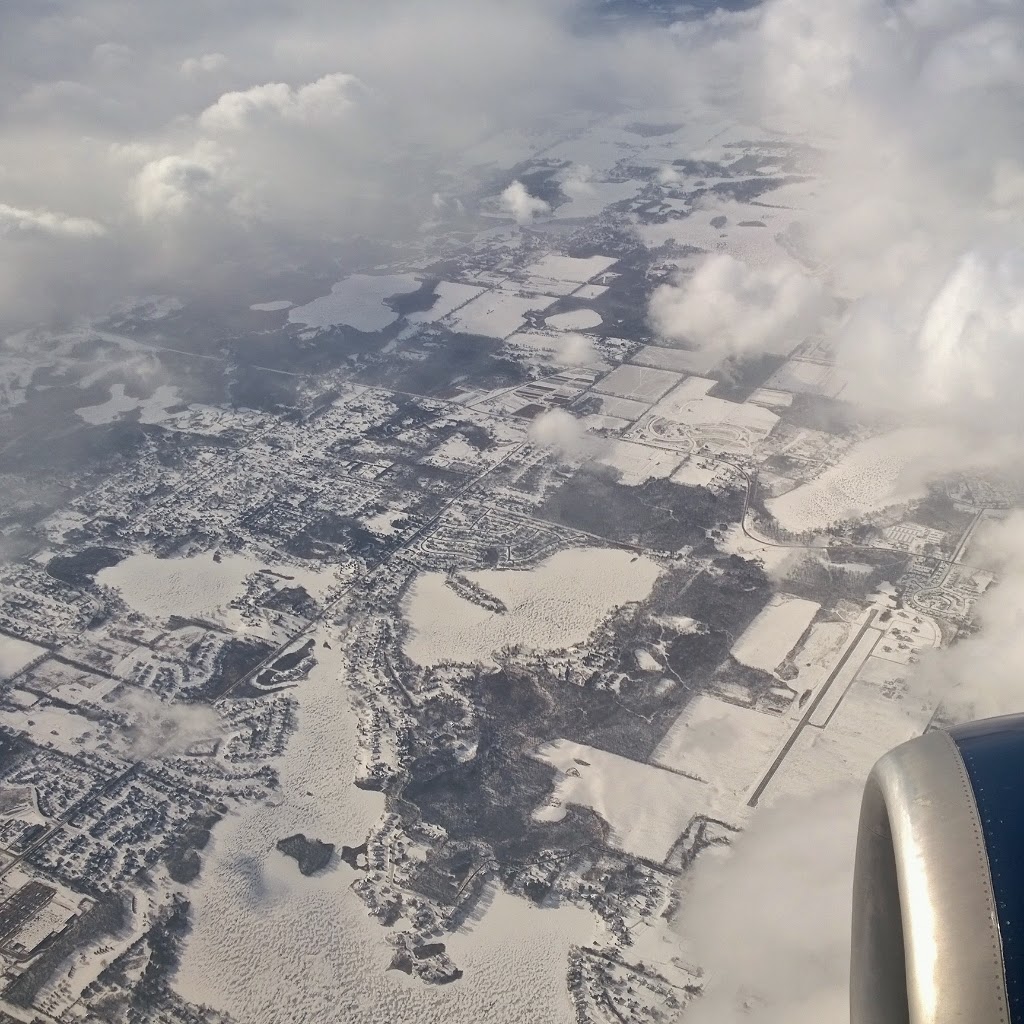 And the DTW runway was kind of snowy. 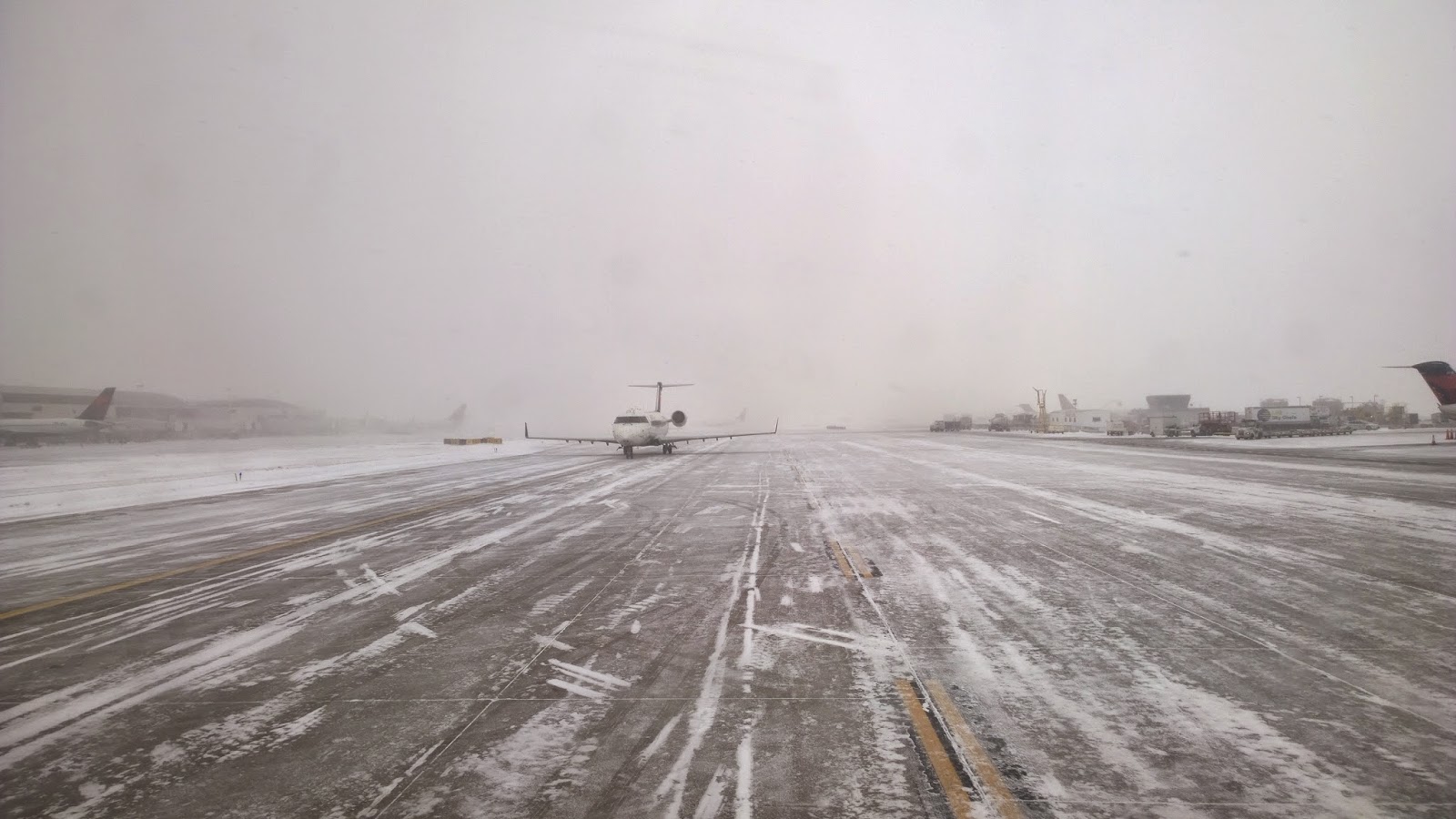 And while I landed in A gates, my flight to Syracuse was a CRJ that took off from C gates, so I got to go through the peaceful light tunnel. If you’re ever at DTW and have a few minutes to kill, ride the moving escalators though this tunnel. You will immediately feel relaxed. 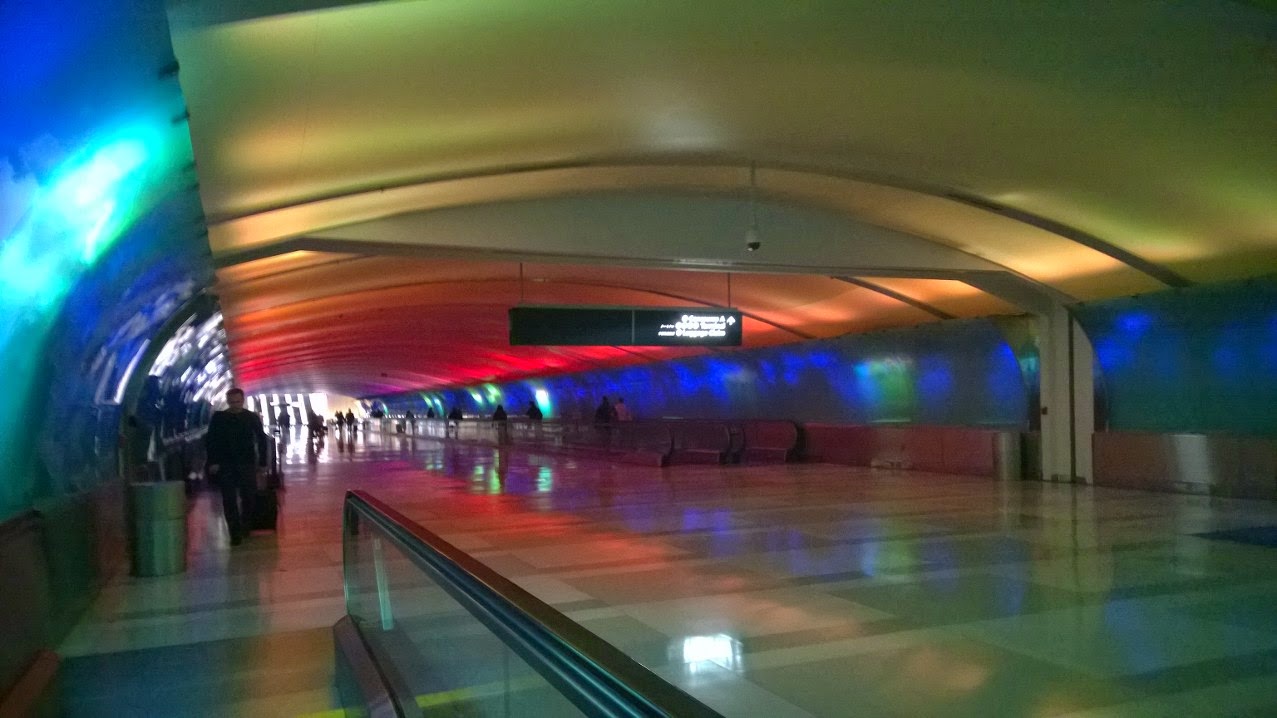 And since it was snowy, our plane needed to be deiced. As I looked out the window, imagine my terror when I saw this guy about to deice our plane! 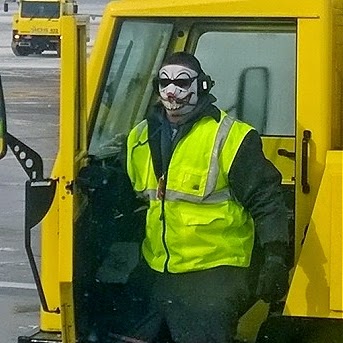 Luckily, in spite of scary deice man, we arrived safely in Syracuse about 3:30 p.m. I picked up my rental car and drove to my hotel, the Courtyard at Armory Square (which is a great location and many cool bars and restaurants are walk-able from here).
I was starving, so I walked a few blocks to a Syracuse staple called Pastabilities, or just “Pasta’s” to the locals.
I sat down at the bar and asked the bartender a few questions about the menu and drinks. Pastas had a good mix of local and national craft beers. After some discussion, he suggested Blood Orange Gose by Anderson Valley (which was not local…).
For dinner I ordered the Sonoma Caesar Salad and the Pasta’s Bolognese (beef and pork bolognese, pappardelle, parmigiano-reggiano). Additionally, the bartender recommended I try the famous Spicy Hot Tomato Oil so he brought me a side of it and a bread basket.
While I highly recommend the Spicy Hot Tomato Oil (it was amazing), the pasta was good but I think I’m so spoiled by living a block away from Ethan Stowell’s, Tavolata, that I can’t say it was to die for. But yeah, I’d order it again. But seriously, don’t pass on the Spicy Hot Tomato Oil. 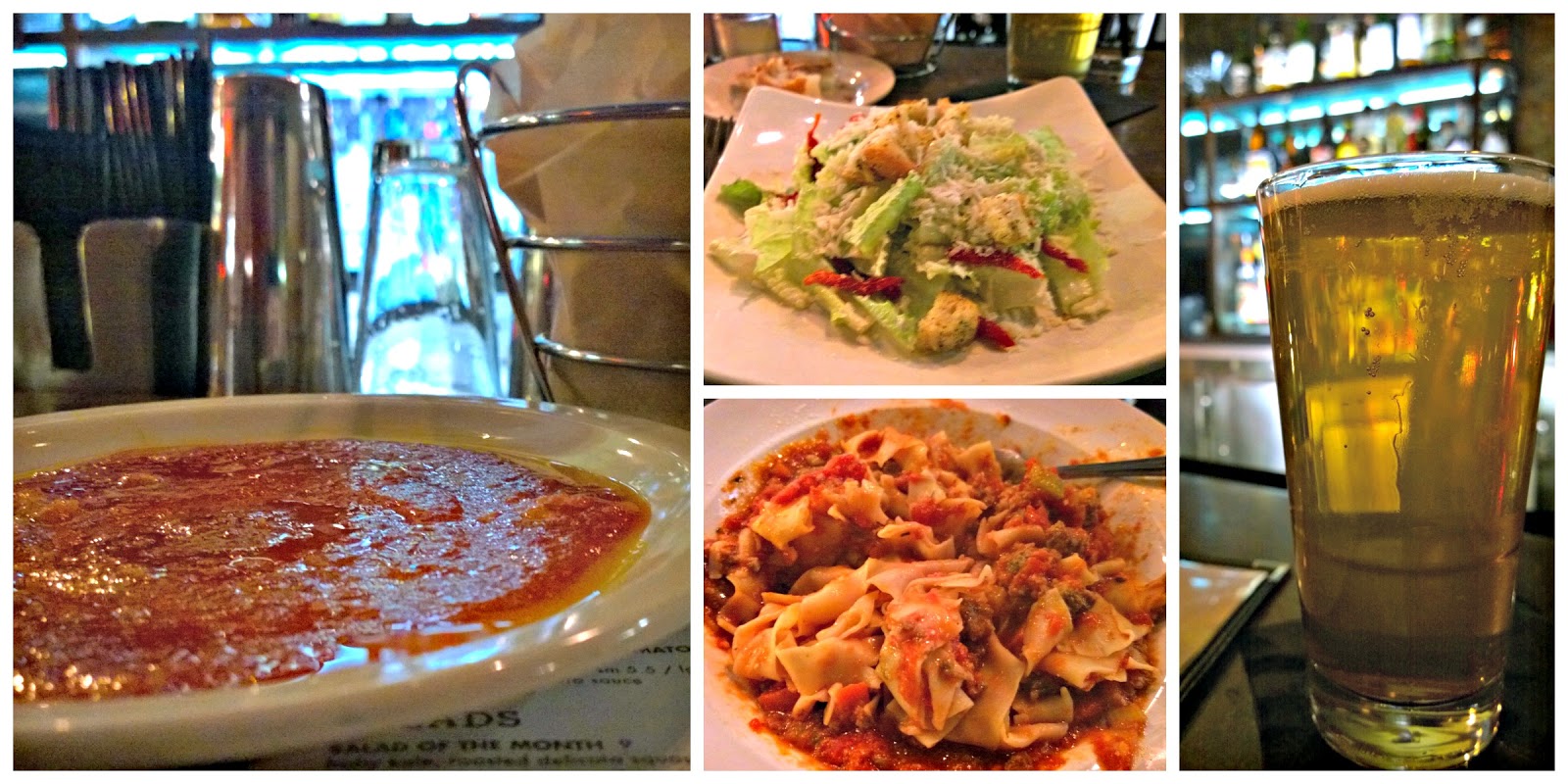 My co-workers, Nari and Kyle, arrived on a later flight and for a late dinner we went to another Syracuse staple, the original Dinosaur BBQ. I had already visited the Dinosaur in Buffalo, but we wanted to check out the original.
We ordered a lot of food. Nari and Kyle shared the app special when I got wings and brisket. It was delicious and the decor of the original Dinosaur was divey and I liked it a little better than the Buffalo location. 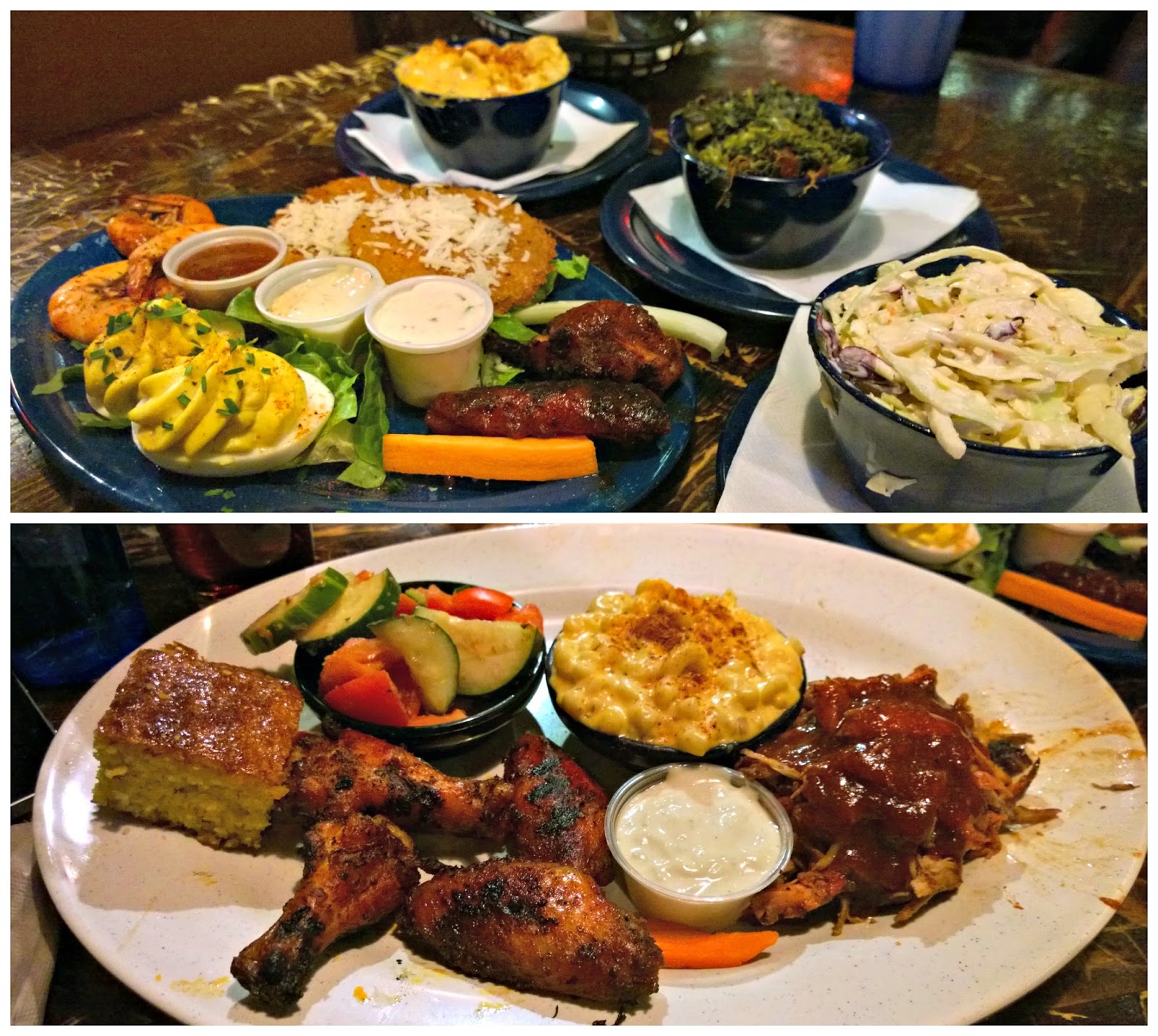 After Dinosaur we went back to the hotel and dropped off the car with valet and headed out for one more drink. We went across the street to The Penny Pub, to spin the shot wheel, of course.

Funny story, our hotel clerk warned us to be careful at The Penny because at any minute the cops may show up to deal with fights. That kind of became a joke to us all night, as The Penny is quite docile and is more upscale than most of our Seattle divey bars, and definitely way more safe than any Detroit dive bar I’ve been to. 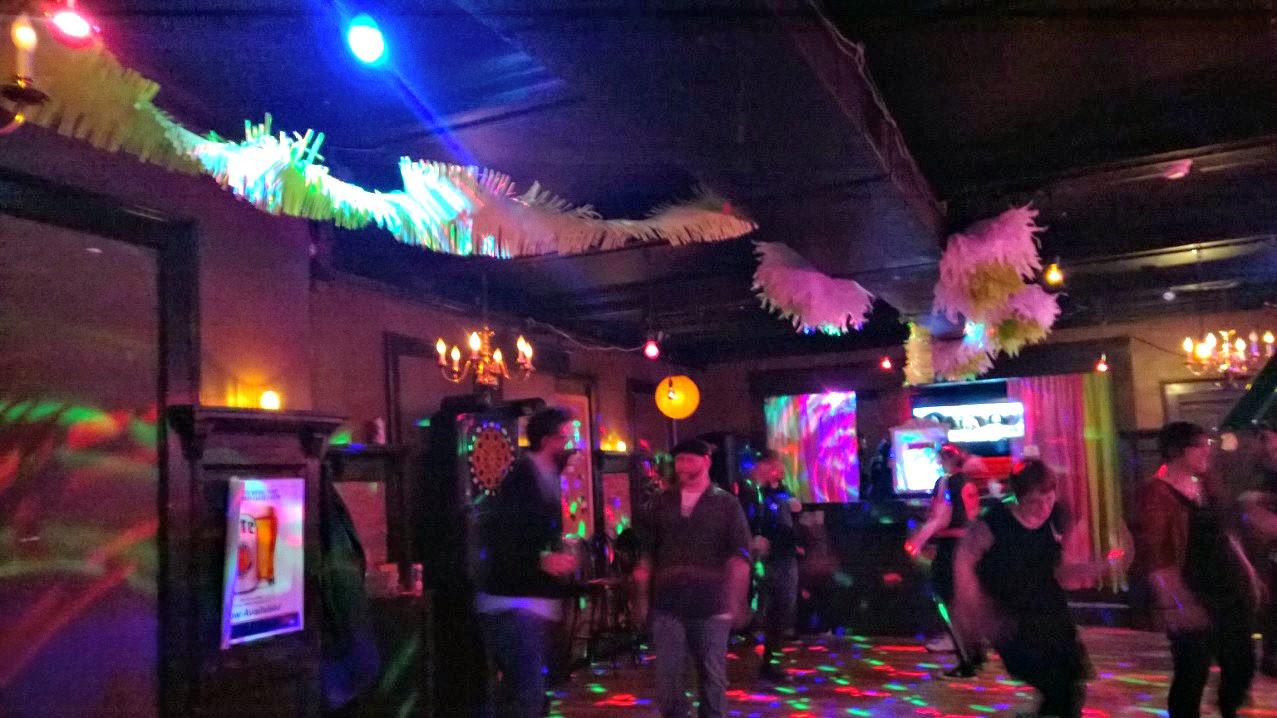 The next afternoon we had our event at Destiny USA. Our special guest, Jim Kelly, was absolutely amazing to work with and a true hero to his fans. I cannot say enough good things about this man.
After the event, we had a brief talk about how 2014 was a hard year for many of us in the room, and how sometimes you have to stop, take a step back, and appreciate what you have. It was at this moment I decided to book my trip to Australia and New Zealand. And thanks Jim Kelly, for helping me decide to walk away from work and have an unforgettable adventure. More on that later. 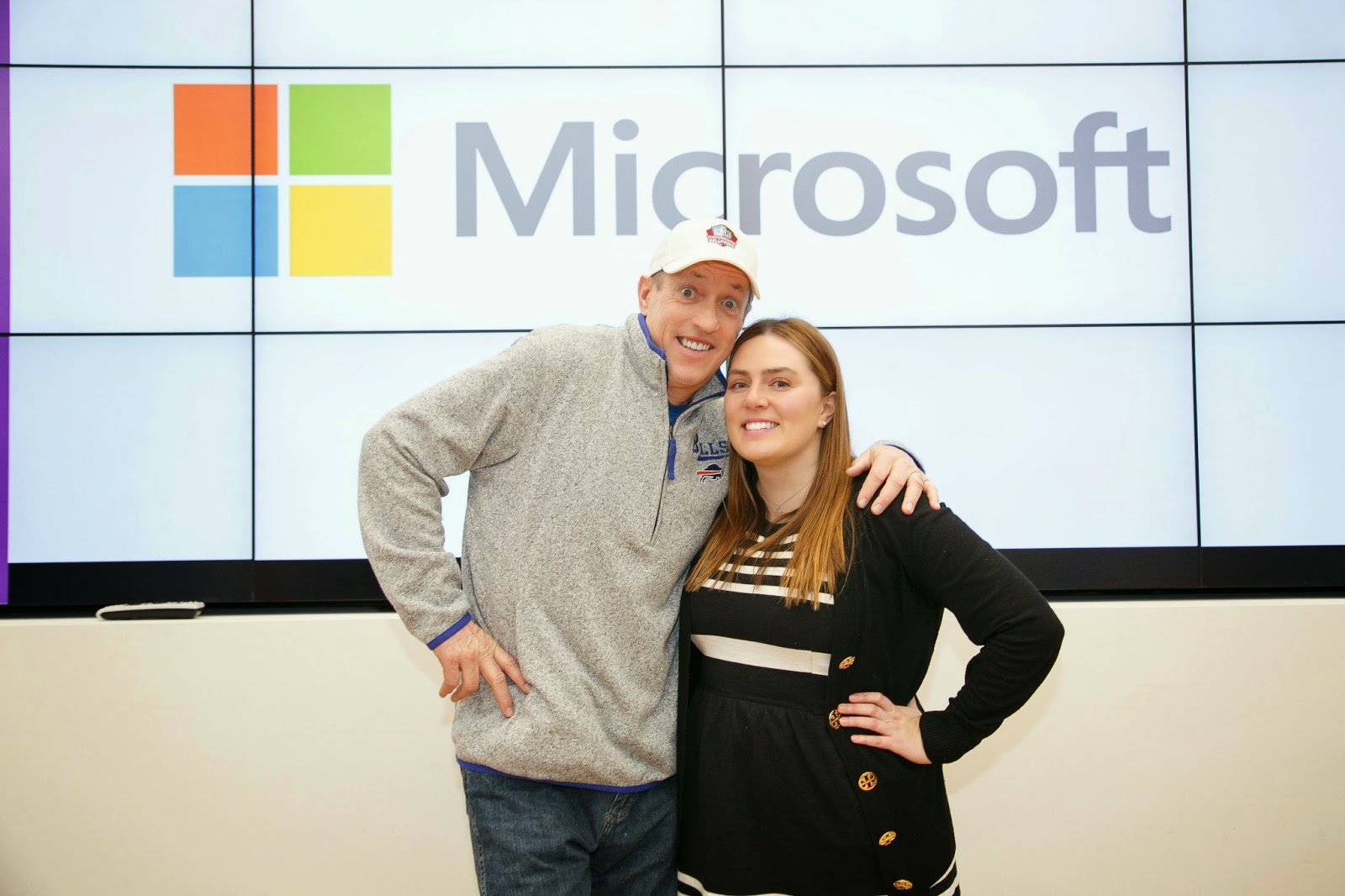 After our event wrapped up, it was time to explore Syracuse with Nari and Kyle. Everyone mentioned this upside down traffic light in Tipperary Hill. Upside down meaning the green is on top and the red is on the bottom.
While I could tell you the story behind it, it may just be easier to read Gizmodo’s article. 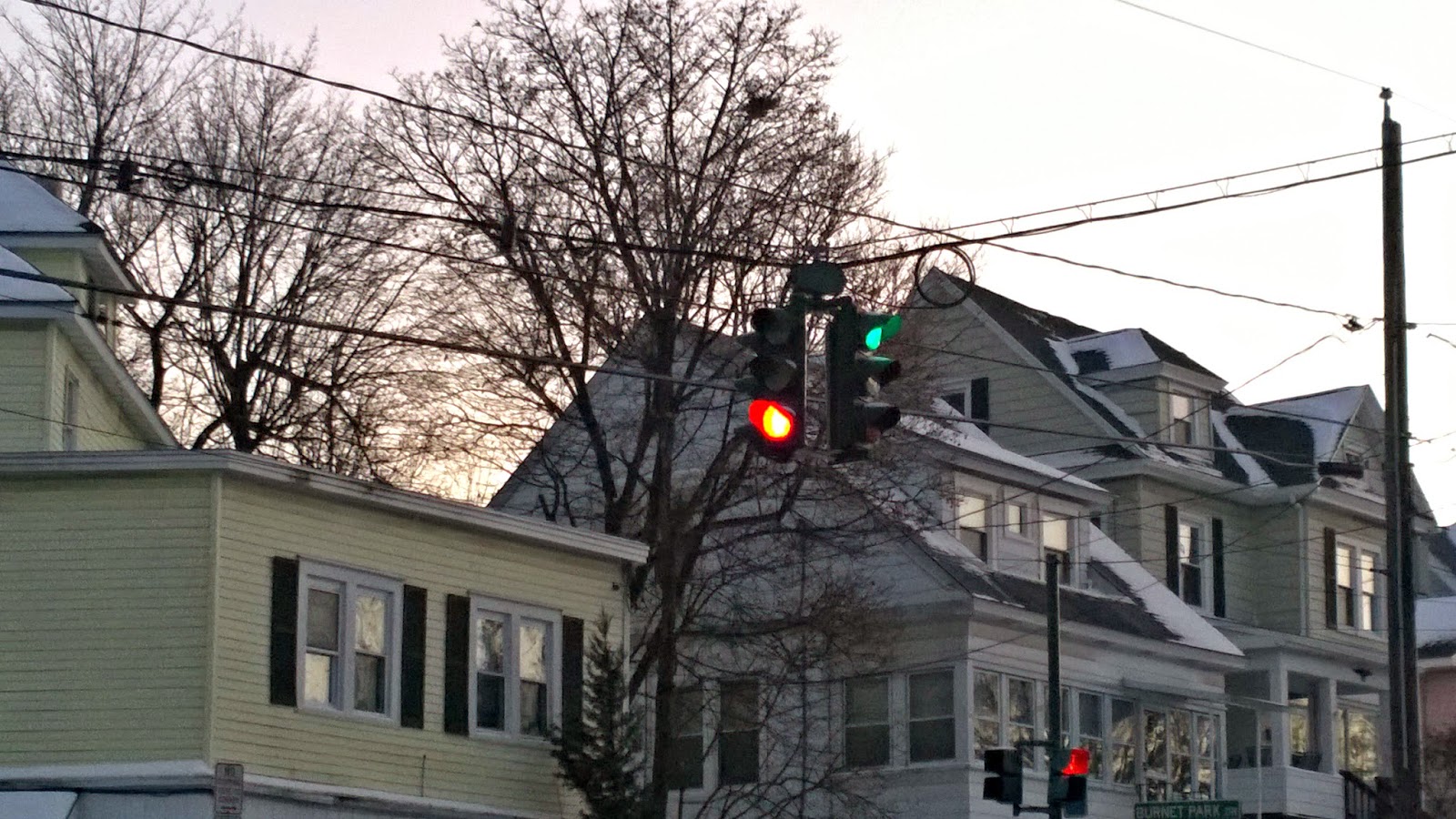 And across the street is a little park where Kyle pointed to the light, Nari took a picture… 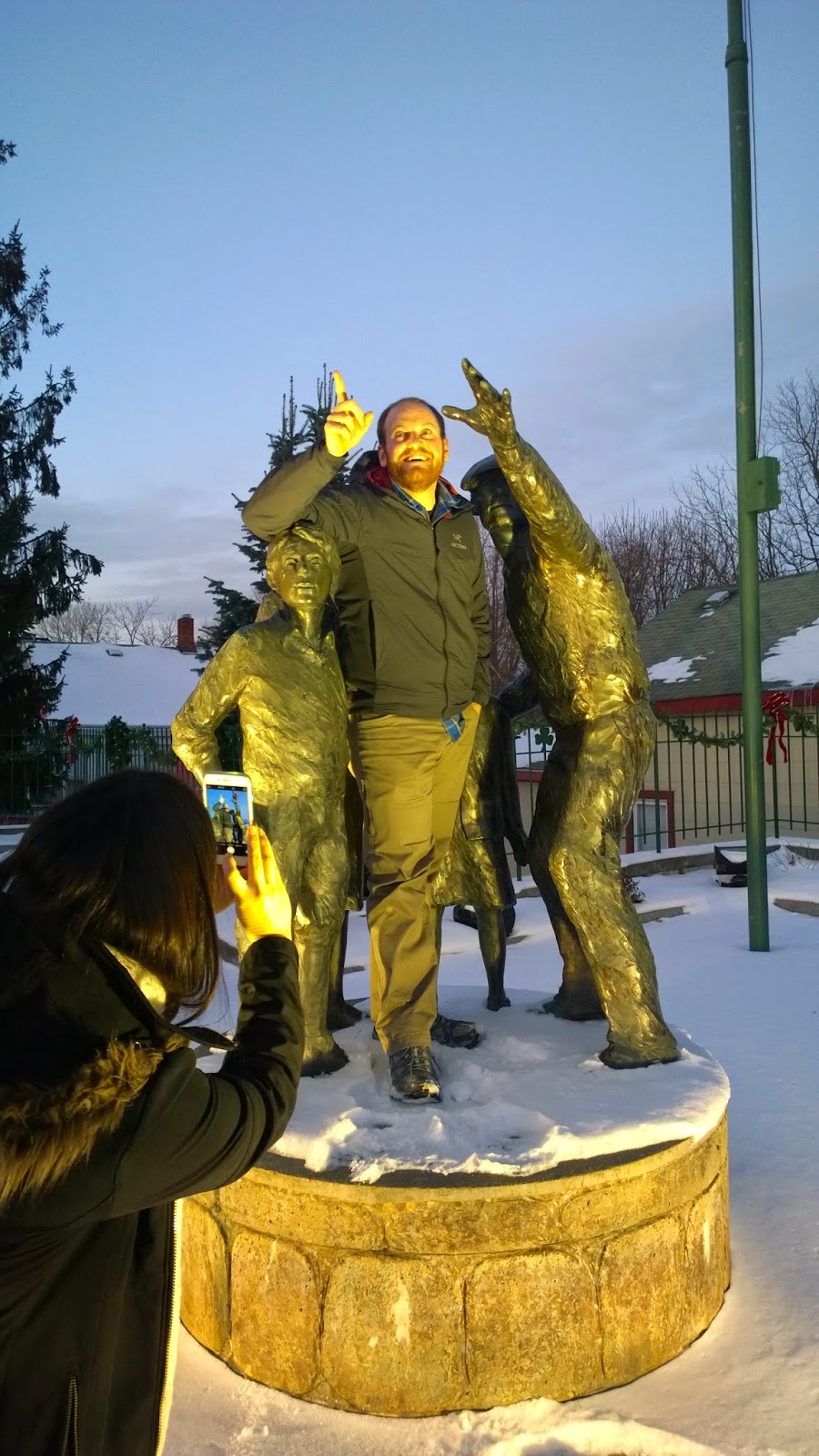 And I made a snow angel… in a dress.
Redditors said  The Blarney Stone had a burger that was $5 and to die for, so that was our next stop. The rumors were true, the burger was amazing. Also, the wings were pretty good, too. We met these guys and ended up sharing a table with them, as the bar was packed with football fans.
A few things about The Blarney Stone – bring cash. Also, don’t do what I did and accidentally take someone else’s order off the pick up window. Apparently the restaurant frowns on that. But do try the burger (seriously, it’s better than a $15 burger) and try the Fried Zucchini. 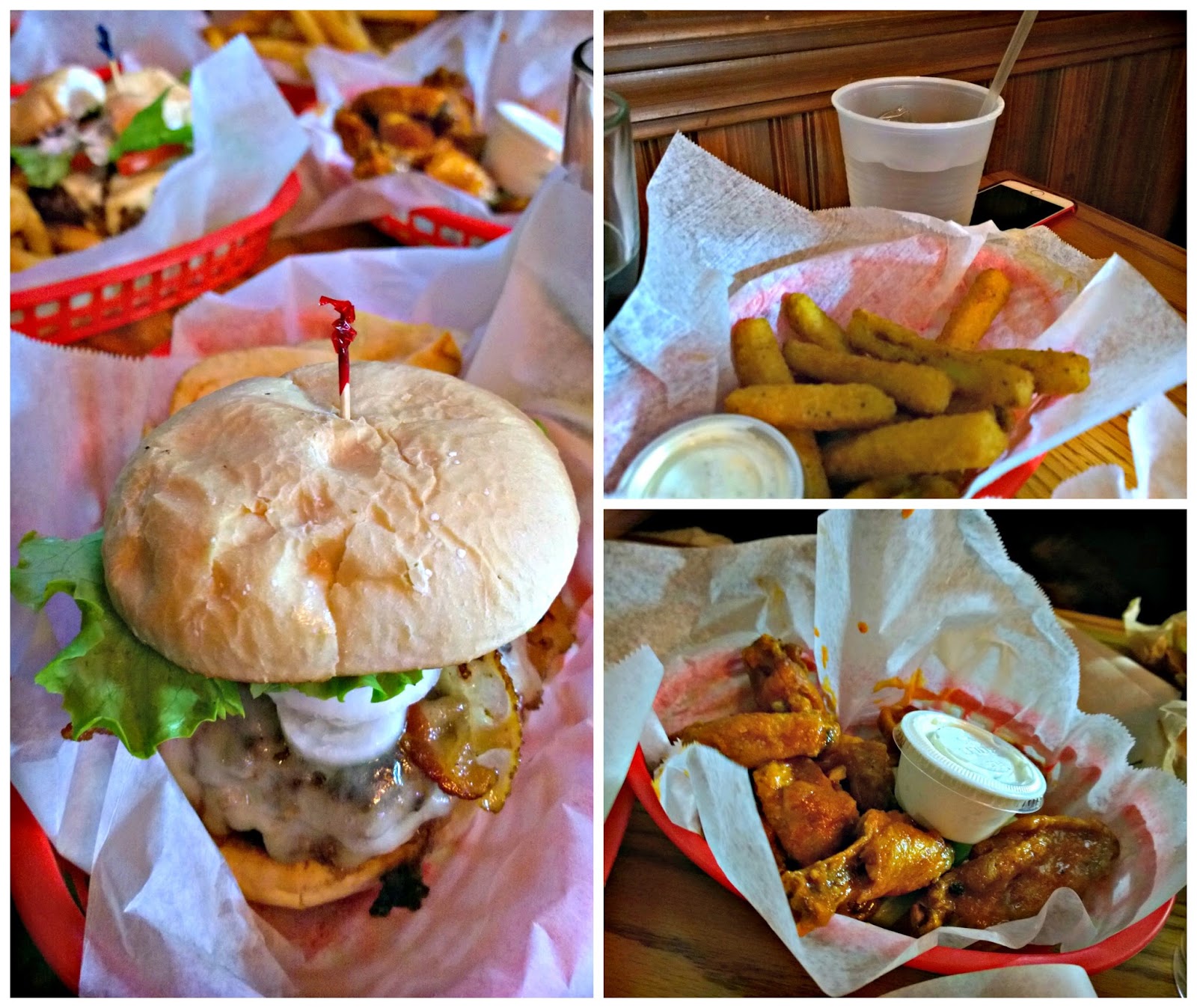 Nari and I made Kyle do a quick Tim Horton’s and Rite Aid stop (for nail polish, of course) and then we dropped Nari off for the evening.
Kyle and I went out to find some beers and watch the Seahawks playoff game vs. the Panthers. While I’m a die hard Lions fan, I decided to don my Seahawks shirt and join Kyle to watch the game (I mean, a Hawks win does stimulate our local economy).
But first, we found another “only in Syracuse” attraction, the Shot Clock! If you didn’t know, the shot clock was invented in 1954 in Syracuse, mostly because endless passing was boring fans. To commemorate the invention, Armory Square has a shot clock that endlessly counts down from 24 to 00 and repeats. 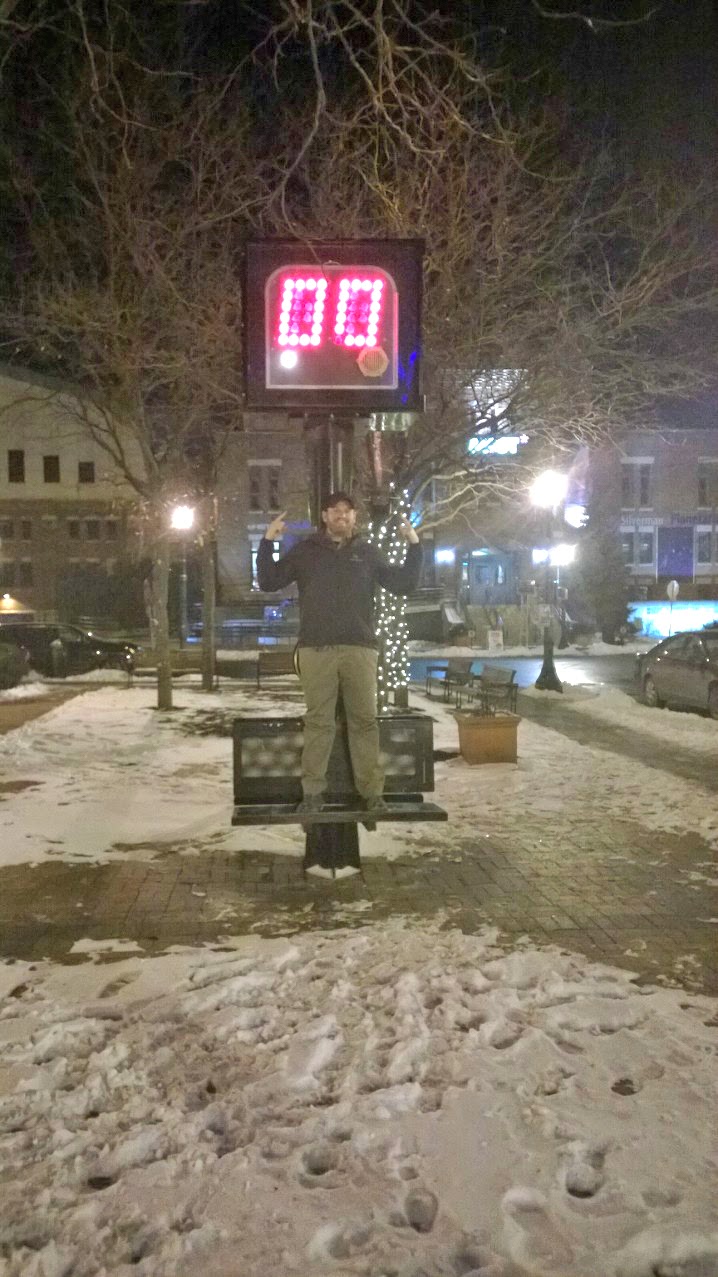 After taking the shot clock picture, I looked down and found a wallet! I picked it up, figuring that I’d be able to mail it back to the address on the license.
Kyle loves country, and a few feet from the shot clock was a country bar called Daisy Dukes.  Naturally, that’s where we went.
We arrived a little before opening, but the bartender was super cool and let us watch the game with sound until half time when they’d actually open and have a DJ. Also, at some point the owner came by and we chatted with him a bit about the bar. He was also super cool. One more thing to note – this bar has a mechanical bull!! 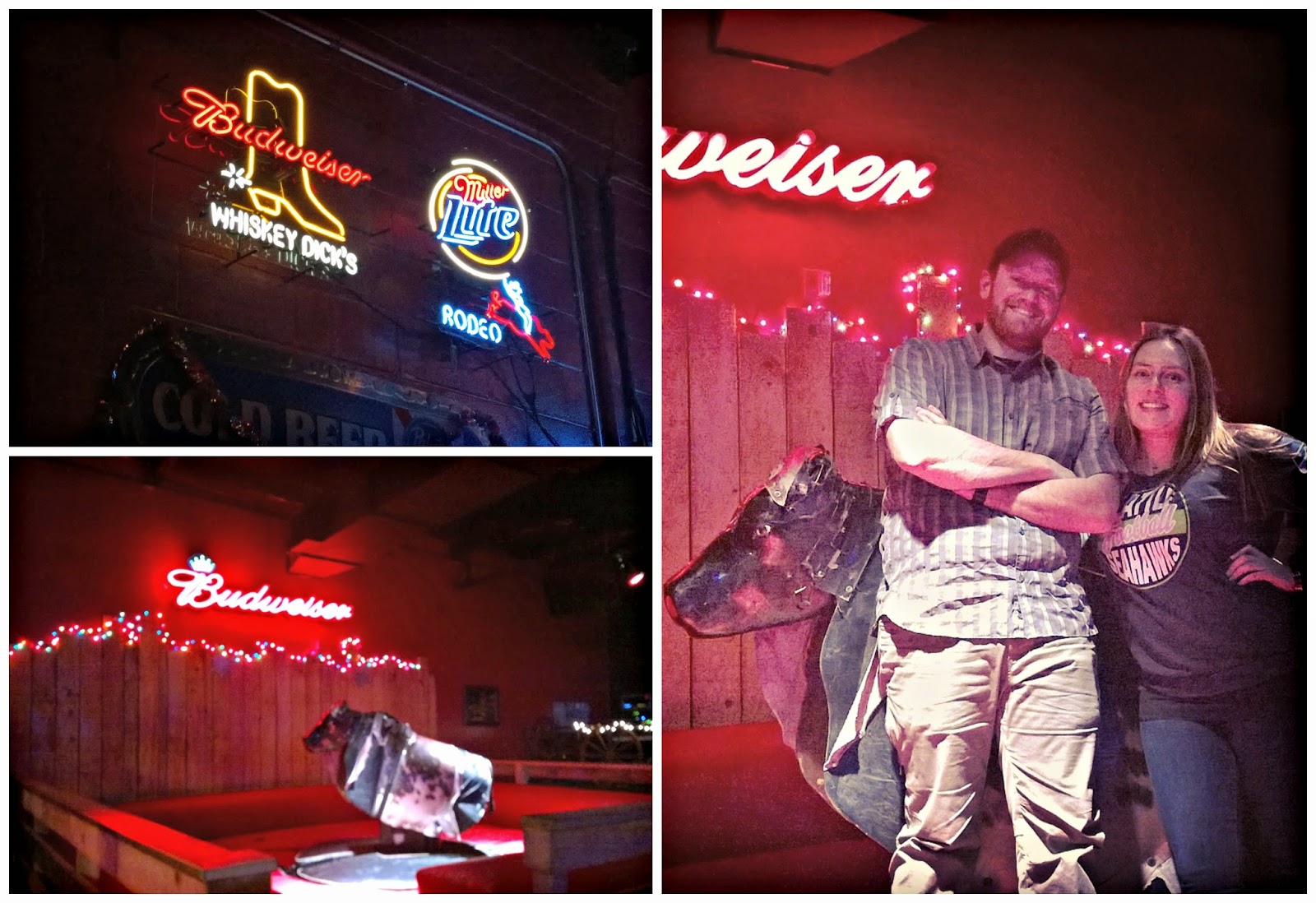 While Kyle and I were watching the first half of the game, I decided to do some social media detective work on the owner of the lost wallet. We found the owner’s Facebook and Twitter profile, and also sent Tweets to some of his friends. I was getting this wallet back to him, eventually.
At halftime, Kyle and I went to a few other bars to try to watch the game. Blue Tusk was a little busy, so we ended up at Small Plates Detroit (yes, Detroit!) in Syracuse. We got a prime table right by the TV and ordered some Detroit-ish goodies. I say Detroit-ish because they weren’t exactly Detroit style (like we had to ask for onions and cheese on the “coney”). However, they were still pretty good.
We went with fried green tomatoes, Detroit pizza and a Detroit coney. 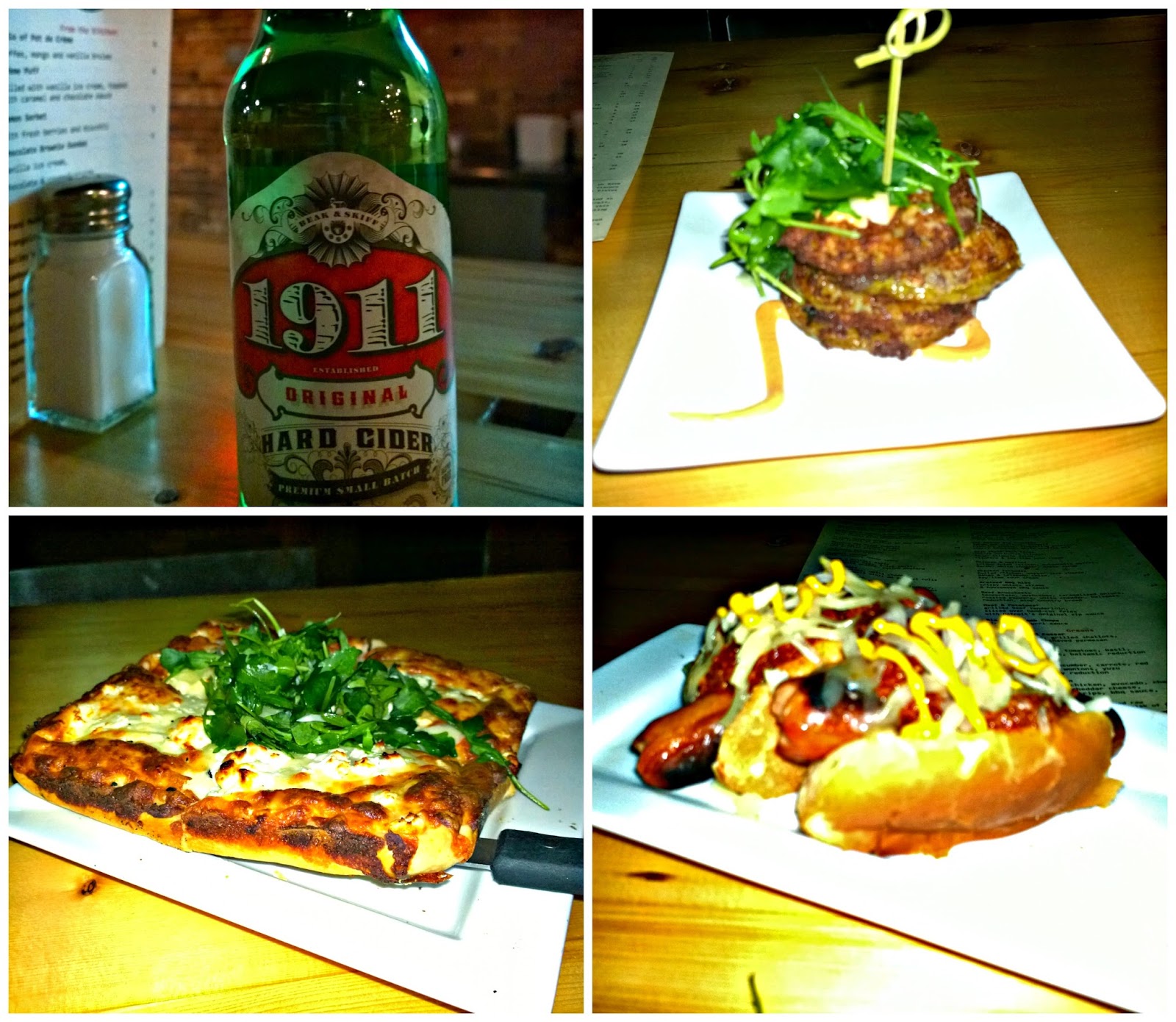 And if you’re curious, we finally got a hold of my new best friend Jahari and he got his wallet the next day. Though we were pretty bummed he wasn’t able to join us for a drink. 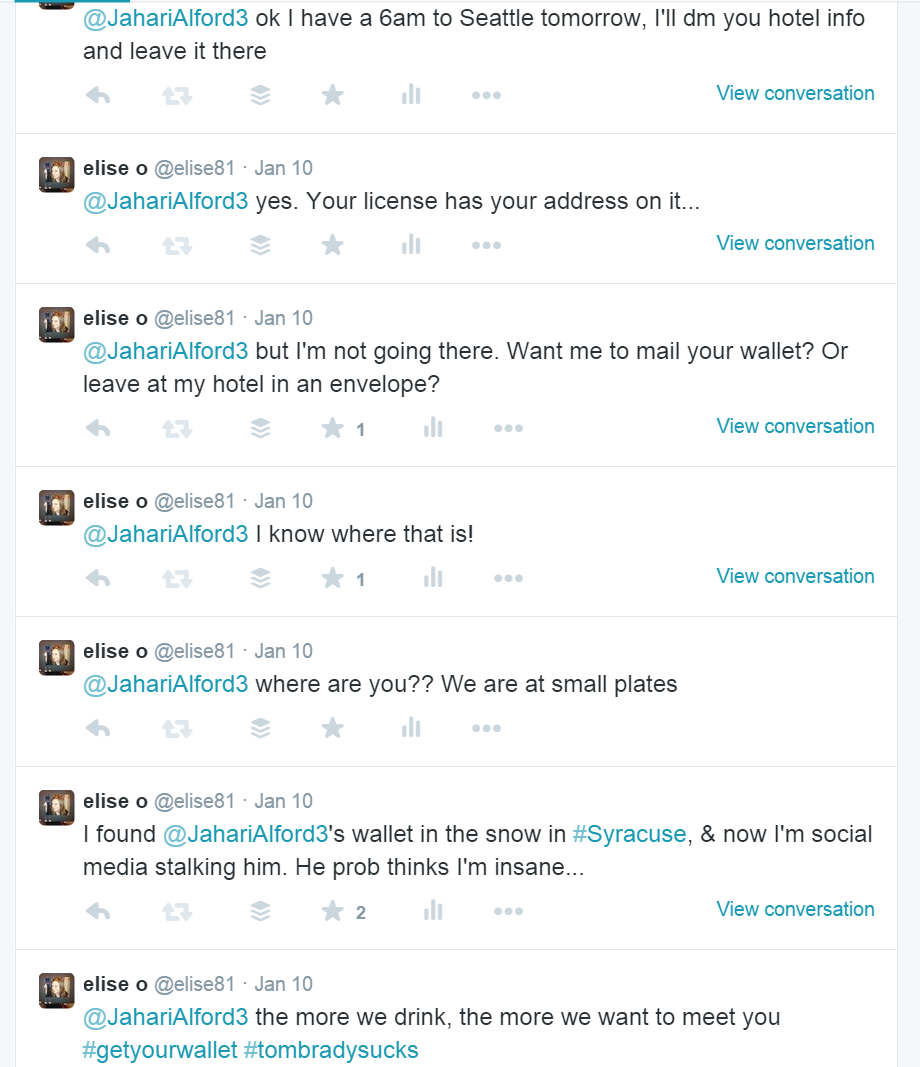 The next morning was brutal. Waking up at 4:15 a.m. for a flight is awful. I dropped off the rental car, checked in, and was off to my gate. My first flight to JFK was quick, thankfully. And provided for a beautiful sunrise over New York City. 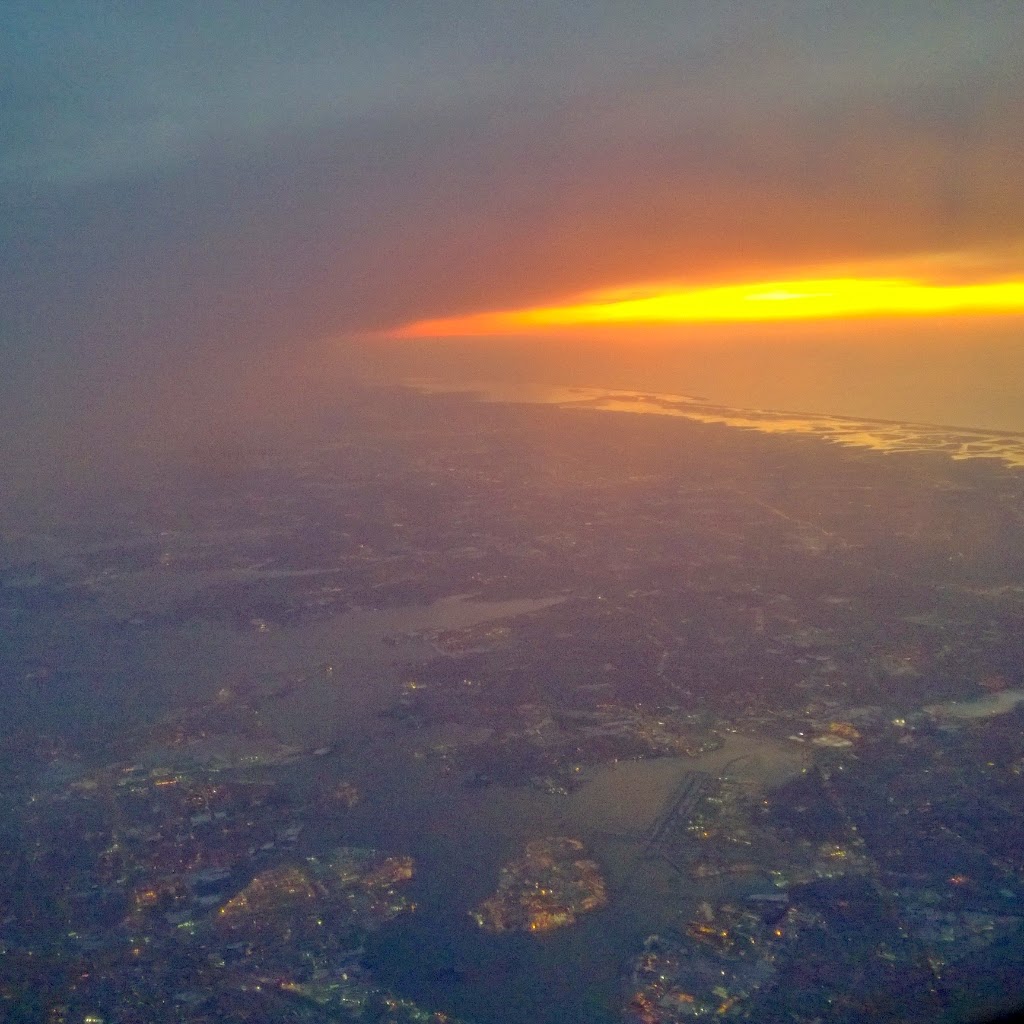 I had a few moments to join the JFK Delta Sky Club and get a bite to eat. And noticed how salty my boots were from the snow/slush/salt in Syracuse. 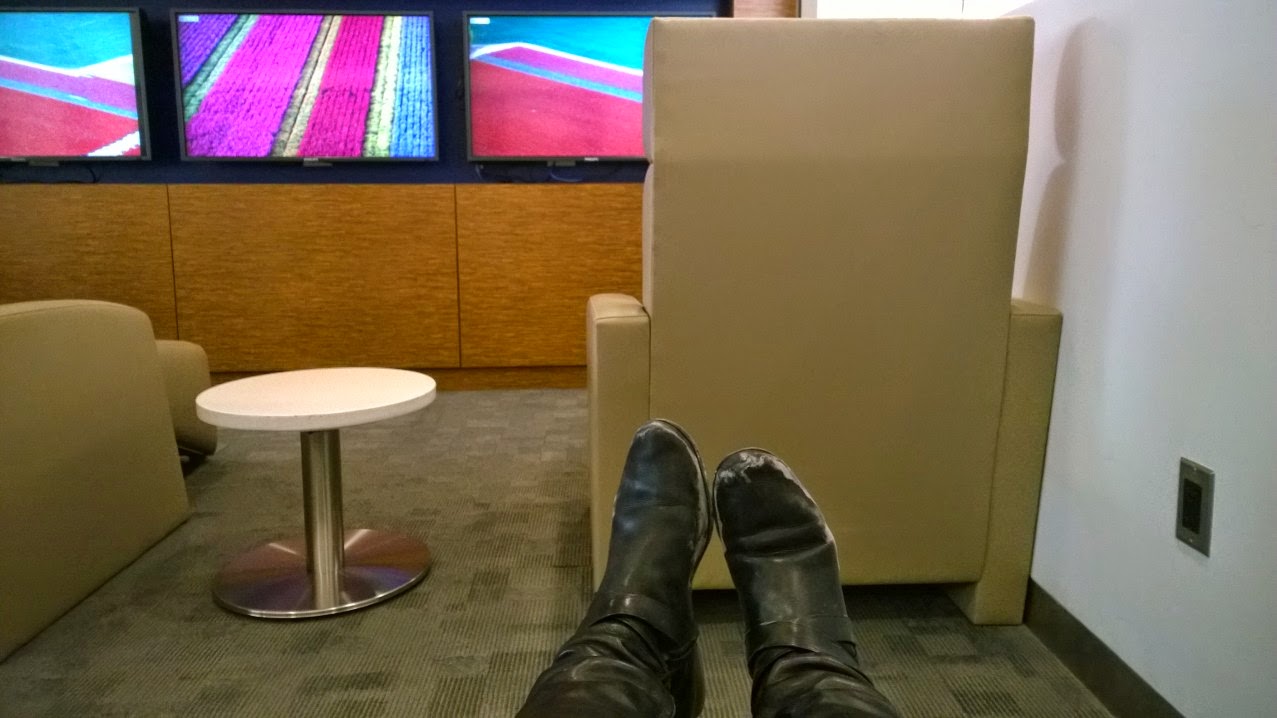 Luckily, I was upgraded to first on my JFK to DTW flight. Delta considers JFK to SEA to be a business elite, or whatever, even though we were flying on a typical 737 with normal first class seats. They provided the Westin Heavenly Bedding and an overnight travel kit (eye mask, socks, toothbrush, etc.) like they do on the lay flats, but it kind of ends up just being in the way, especially in a bulk head seat. 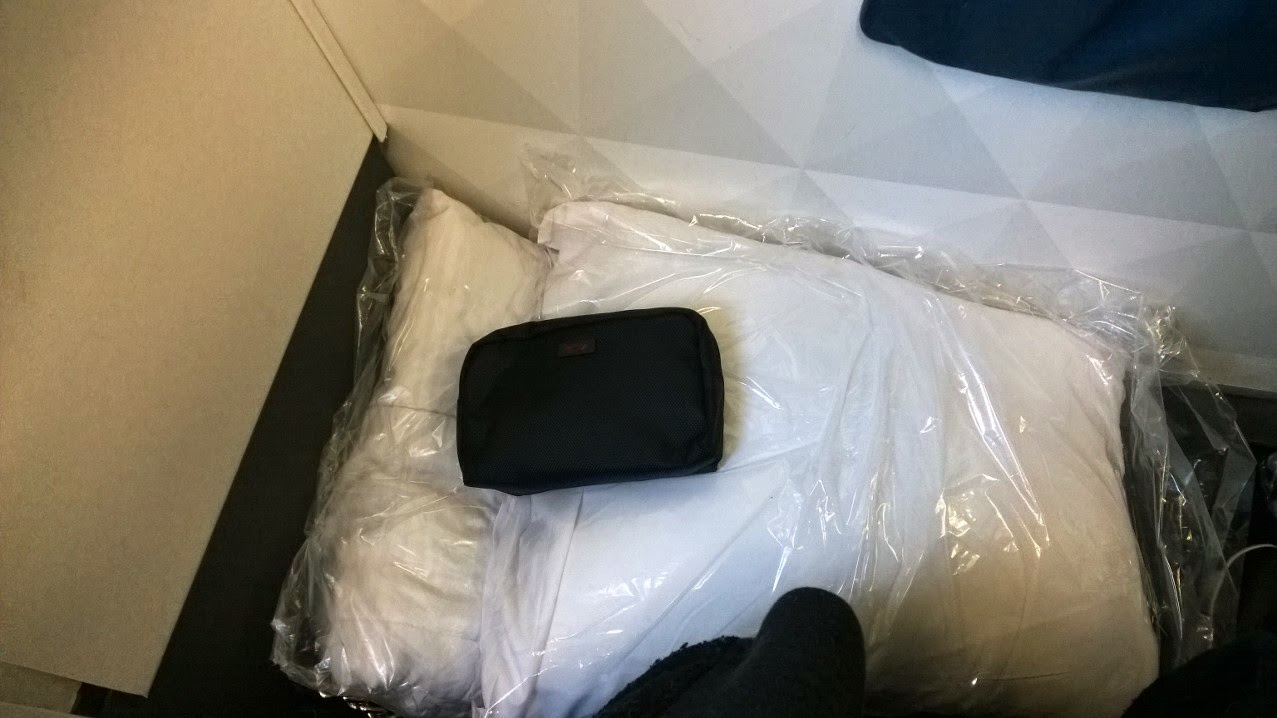 However, about an hour into my flight I was grateful for the bedding as I passed out and slept for most of my flight.

All in all Syracuse is a fun town, and I enjoyed it much more than I ever thought I would. I would definitely go back, and I hear they kick off St. Patrick’s Day about a month early with a February parade (read that as this town can party.)